It is important to recognize that the public capital stock is not identical to infrastructure (on a reasonable definition of infrastructure). For example, financial estimates of capital stocks in the public sector include values of residential dwellings, health institutions, and government offices. Also, some government assets (especially roads) are difficult to value, both within the country and across countries. These shortcomings argue in favor of supplementing financial estimates by quantitative measures of infrastructure expressed in per capita terms.

See Annex I for details.

The intuition behind this weighting scheme is that infrastructure indicators are a combination of noise and “true” information components capturing the behavior of the underlying infrastructure. Indicators with high volatility are likely to have higher noise components, and thus less confidence should be placed on them, justifying lower weights. Applying alternative weighting schemes (for example, equal weighting) produces qualitatively similar results and has no significant implications for the empirical findings presented later in the paper.

These calculations should be interpreted with care, as unit costs of building infrastructure (kilometers of roads/rails financed by €1 million)—estimated from the 2016 Framework Transportation Strategy of Bosnia and Herzegovina—vary significantly across projects. Geological conditions and quality of projects are key determinants of the dispersion in the unit costs. The marginal economic contribution of a euro invested in the different sectors may differ from the marginal contribution to the measured index used in this analysis.

The PIMA assesses the strength (“on paper”) and the effectiveness (“in practice”) of the institutions. Specifically, the PIMA evaluates 15 key institutions for planning, allocating, and implementing public investment. For each of the 15 institutions, three key features are identified, each of which can be fully met, partly met, or not met. Based on how many of these key features are in place, countries are given a score. PIMA scores for Albania, Kosovo, and Serbia are based on Fiscal Affairs Department technical assistance reports, while scores for the other three Western Balkan countries are based on desk reviews conducted as part of the preparation of the IMF’s November 2016 Regional Economic Issues Report.

In Kosovo, this owes to the fact that the debt level is low so the debt-stabilizing primary balance is commen-surately high. At current deficits, debt is still expected to stabilize at about 30–35 percent of GDP.

See Box 2.1 for examples of infrastructure projects in the region that are linked to donor financing.

This financial envelope includes EU grants and assumes IFIs’ disbursement in line with the recent past. Estimates based are based European Commission, Instrument for Pre-Accession Assistance (IPA II) 2014–15, for Albania, Bosnia and Herzegovina, Kosovo, FYR Macedonia, Montenegro and Serbia.

See https://ppp.worldbank.org/public-private-partnership/agreements for a detailed discussion of various types of PPPs and sample agreements associated with infrastructure projects.

The EU Multiannual Financial Framework (the latest is 2014–20) sets the ceiling for the EU annual budget for a six- to seven-year period, but countries have one additional year to disburse committed resources.

This assumption is also supported by the small domestic savings in Western Balkan countries and currently favorable global financial conditions. Costs of external borrowing will increase as key central banks normalize their monetary policy in the future.

Fiscal space is also needed to accommodate higher maintenance costs due to higher capital stock. In the long term the public stock of capital is higher; therefore, additional public resources are needed to keep that capital productive. In all the scenarios, the public investment surges are followed by moderate increases in the tax burden.

These results should be interpreted carefully, because they depend on using the correct weights that reflect the true economic impact of the different sectors. 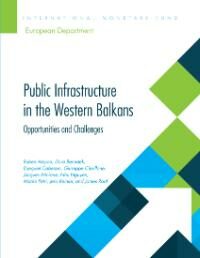