The March 2017 issue of the IMF Research Bulletin covers key topics of interest at the IMF.

The March 2017 issue of the IMF Research Bulletin covers key topics of interest at the IMF.

The ability to trade services has increased significantly thanks to technology: service exports now account for almost a quarter of total exports. Service exports have also come to play a central role in global production networks and value chains. A new dataset and toolkit document these important trends in the future wealth of nations. The rise in services exports is not confined to advanced economies; services exports have grown ten-fold since 1990. Services may thus be a game-changer, offering an opportunity to sustain globalization.

In “The Wealth of Nations,” Adam Smith questioned the social value provided by “lawyers, men of letters of all kinds, … musicians, opera-singers, etc.” He was expressing a prejudice against the service sector that holds to this day. Christina Romer lamented in an op-ed that there is a “feeling that is it better to produce ‘real things’ than services” (New York Times, Feb. 4, 2012). Meanwhile, services— which already account for 70 percent of world GDP and 50 percent of employment—are also becoming an important part of trade. In 2014, service exports accounted for nearly 25 percent of total exports (Figure 1). Services exports have also come to play a central role in global production networks and value chains.

While a haircut still requires a trip to the local barbershop, many other services no longer require the provider to be close to the customer. Financial services are global and many consulting services, such as architectural designs, can be delivered from anywhere. The main reason for the increased tradability of services is the revolution in information and communication technologies. Rapidly declining telecommunication costs, increasing internet adoption around the world, and rapid proliferation of broadband internet services have made arm’s length delivery of services possible within and across borders.

Since many countries can take advantage of these technological advances, the rise in services exports is not confined to advanced economies. Services exports from developing countries have grown tenfold since 1990 and at twice the rate of services exports from advanced economies; hence, developing countries’ share has increased from 3 percent in 1970 to over 20 percent in 2014 (Figure 2). This increase is not just due to higher exports of traditional services, but is also due to modern technology-enabled services as well, e.g., business services (including R&D and consultancy), computer and information services, financial services, and intellectual property.

As a result of these developments, a nascent literature has begun to challenge the long-held tenet that industrialization has to be the prime engine of growth for emerging markets and low-income countries. This classical view holds that the manufacturing sector promotes broad economic growth (Kaldor, 1967) while the services sector is resistant to improvements in productivity (Baumol, 1967). This argument was based on the assumption that the provision of services—such as restaurant meals, haircuts or medical checkups—required face-to-face transactions. These services did not lend themselves easily to standardization and trade—the source of growth in productivity and hence incomes.

Technology allows for services to be increasingly unbundled; a single service activity can now be fragmented into tasks that are done at different geographic locations. Adam Smith described how the productivity of a pin factory was boosted if, instead of one worker doing all the tasks involved in making a pin, several workers each specialized in a particular task, and then combined the fruits of their labor. A similar process of specialization and exchange is underway in many service industries. As with goods, services productivity can rise because of specialization (a finer division of labor) and scale (falling unit costs of production). Indeed, recent evidence highlights that services seem to experience productivity growth through the same mechanisms that have traditionally made manufacturing the key driver of growth (see, e.g., Meglio, Gallego, Maroto, and Savona, 2015; Flaaen, Ghani, and Mishra, 2013).

While it may be too early to tell if the drivers of growth are moving from manufacturing into services, it is clear that the rise in services exports is an important development to track. Our forthcoming working paper (Loungani, Mishra, Papageorgiou, and Wang, 2017) contributes to this effort by introducing a new dataset on global trade in services for 192 countries from 1970 to 2014. We use information from the IMF’s Balance of Payments Statistics database to track developments in 66 services exports subsectors. A web portal (http://data.imf.org/ITS) provides access to the data and tools to produce charts and stylized facts.

Using this rich data, we document the global trends in services exports and how countries differ on various dimensions of services exports. The paper makes the case that services exports are not only catching up with exports of goods in many countries, but that they could also help sustain the globalization process, with implications for structural transformation, labor allocation, and income distribution.

At the global level, computer and information and financial services have emerged as two of the most important sectors in the services exports basket. In 2014, world exports of computer and information services reached US$300 billion, 10 percent of the total. Similarly, financial services have grown rapidly in world exports, and have bounced back since the financial crisis to almost US$350 billion in 2014.

There has been much discussion of India’s services exports miracle, which seemingly has defied conventional wisdom about the process of structural transformation and economic development (see e.g., Dehejia and Panagariya, 2014). This stands in contrast to China, where export growth was primarily driven by goods (Figure 4). India has been the world leader in computer and information services, estimated at about US$75 billion in 2014. However, it lags behind China in traditional services exports, such as transport, travel, and manufacturing services, with a gap of over US$60 billion. Travel, transport, and other business services have become the largest exporting sectors in China, while progress has also been made in computer and information services and construction services (Figure 4).

The dataset has many potential research applications, including studying the growing importance of modern services in the global economy; the role of services exports in the process of structural transformation, and the implications of trade in services on macroeconomic volatility, labor reallocation, and income inequality.

Role of modern services. Traditional services such as transport, travel or retail still require physical presence; however, they too are gaining from network effects and increased tradability enabled by technology (Loungani and Mishra, 2014). In addition, the shift to export of modern services has spread across countries at different income levels, making them one of the fastest growing segments of world trade (Figure 5). This is an important trend with ramifications for global export allocation and growth strategies of developing countries.

Growth, structural transformation, and diversification. Many emerging markets including China are seeking serviceled sources of growth (McKinsey, 2013). Preliminary evidence suggests that movements in exports of services exhibit higher correlation with country-level GDP growth outcomes than those in the exports of agricultural or manufacturing goods. Service-led growth also offers opportunities for diversification and competitiveness for countries across the development spectrum to resource-rich and low-income countries. (Copeland and Mattoo, 2007; Reinsdorf and Slaughter, 2009; Gervais and Jensen, 2014; Leo and Philippe, 2014).

Income inequality. Finally, services exports may be more inclusive than the traditional goods-based model of the world economy. There is a negative correlation between the change in export services and income inequality. Plausible explanations may be related to labor mobility benefiting primarily low- and middle-income workers, and female labor employment increasing in countries with a sizable services exports sector.

Trade is steadily shifting away from manufacturing and into services. Thanks to technology, more services can now be traded across countries. Services now contribute significantly to the productivity of many manufacturing industries; hence, increasingly, discussions of “manufacturing vs. services” appear outdated—countries now need services to develop their manufacturing sectors. Could these developments be a good thing for the global economy which, for so long, has depended on the engine of manufacturing? The glimpses from our dataset presented above suggest that export of services may indeed be a game-changer, offering an opportunity to revive and sustain globalization. For advanced economies, trade in services could help them retain some global competitive edge. At the same time, the growing tradability of services may aid the diversification strategy of resource-rich countries and low-income countries. For many countries, services may offer a pathway to inclusive growth, for instance by offering work opportunities for women.

Share of World Service Exports in Advanced vs. Developing Countries 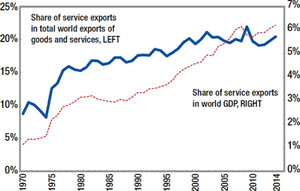 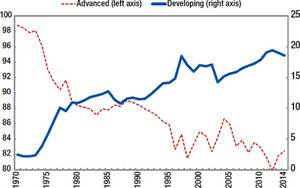 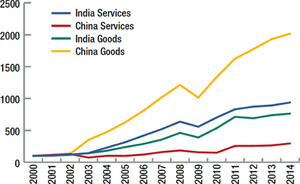 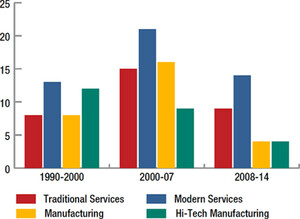