The U.S. oil industry experienced one of its most dramatic shifts in 2010–14, when a combination of high prices and technological change (notably horizontal drilling) led to a doubling of U.S. crude oil production. Both the number and productivity of rigs increased, with important implications for the oil market and the global economy more broadly. Following the 2014–15 oil price collapse, there has been active debate about the ability of the U.S. oil industry to absorb the shock and reequilibrate the global oil market. An important piece of this puzzle is understanding whether the shale industry can sustain its past exponential productivity increases. This note proposes three scenarios for shale production and draws out the spillover implications for some major oil importers and exporters.

The advent of shale oil production has added about 5 million barrels a day (mbd) to the crude oil market, contributing to a global supply glut. U.S. petroleum production accounted for 60 percent of world petroleum supply growth from 2011 to 2015. The supply glut is a key factor behind the dramatic decline in oil prices starting in mid-2014, from $108 a barrel to less than $30 in early 2016. Changes in the strategic behavior of the Organization of the Petroleum Exporting Countries (OPEC) in November 2014 and the projected increase in Iranian exports were also important factors behind the glut. In recent meetings in September and November 2016, OPEC changed its strategy again to cut production in order to stabilize prices. However, the targeted production, 32.5 mbd, is only 1.2 mbd lower than its highest level of production. In addition, OPEC members have tended to produce more than their quota in the past, which calls the credibility of the production cut into question. On the demand side, downward revisions of global growth, especially in emerging markets, added downward price pressures—as did the turmoil in financial markets and the strong dollar. Looking ahead, the secular drop in petroleum consumption in advanced economies and scaled-down potential growth for emerging markets point to modest growth for oil demand.

In this context, it is important to assess the resilience of shale oil production to low oil prices. U.S. shale oil production has been fairly resilient overall, in spite of low oil prices, thanks to continued phenomenal efficiency gains, some of which correspond to cost deflation induced by the same big drop in oil prices. Specifically: (1) Shale is still at a relatively early stage of its industry life cycle, so there is substantial scope for technological progress. (2) Declining upstream investment has forced the oil service industry to cut prices (by squeezing margins) for activities such as renting a rig or building pipelines. With significant cost deflation for oil service products, the breakeven cost of shale production has declined. As a result, despite dramatically lower investment (Figure 1), shale production has declined slowly, and much less than expected, and is today only 10 percent below its peak.

Prospects for the U.S. shale industry will affect the path of oil price recovery. On the one hand, shale production can be stepped up fairly rapidly so long as oil prices remain above shale field breakeven prices, which have on average dropped from about US$60 to US$40 a barrel given operational efficiency gains. Most likely, shale oil production will lead to shorter and more limited oil price cycles since it entails fewer sunk costs than conventional oil, and the lag between investment and production is much shorter. That feature of shale oil will limit the medium-term upward swing in oil prices. On the other hand, although shale oil production has been resilient, many shale oil companies are not in good financial shape. In particular, the wave of bankruptcies and layoffs in the shale oil industry over the past couple of years could slow any recovery in shale oil production. Skilled labor may be more difficult to mobilize swiftly. In addition, the cost discount from the oil service industry is likely to diminish once prices go back up, and the cost of capital may increase as long-term U.S. Treasury yields rise. Thus, breakeven prices could increase moderately with oil prices despite continued productivity improvements. In the next section, using a general equilibrium global model of the oil market, we trace out the macroeconomic implications of various scenarios around the potential efficiency gains in the shale oil industry.

The differential impact on production from these modest changes in assumptions is large. By 2020, U.S. production could range from 3.5 to 8.4 million barrels a day depending on the scenario (the baseline scenario is very similar to the one in the U.S. Energy Information Administration’s latest forecast). The uncertainty regarding U.S. production is more significant than the OPEC oil production cut (1.2 mbd) announced in November, although this is a rather long-term projection. If the upside scenario materializes, the positive effect would be large, because this would be a windfall gain for the United States. Net oil imports would decline, which would reduce the current account deficit. On the other hand, oil producers outside the United States could suffer. We will evaluate the effect using our model.

These shale oil scenarios are found to have the following effects:

In conclusion, the U.S. oil industry has proved resilient to the oil price shock thanks to efficiency gains and cost deflation. Despite widespread uncertainty regarding the extent to which continued technological progress in the shale oil industry can further reduce breakeven costs, our scenarios suggest that the U.S. shale oil industry, all else equal, can put downward pressure on oil prices, which will contribute to sustained global growth—but at the cost of redistributing income from oil exporting to oil importing countries.

Available in print and digital formats 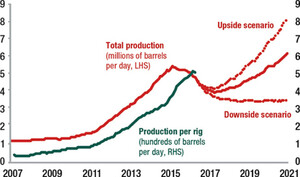 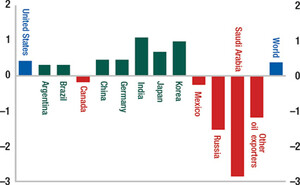