This summary provides evidence of the causal impact of oil discoveries on development. Novel data on the drilling of 20,000 oil wells in Brazil allows us to exploit a quasi-experiment. Municipalities where oil was discovered constitute the treatment group, while municipalities with drilling but no discovery are the control group. The results show that oil discoveries significantly increase per capita GDP and urbanization. We find positive spillovers to non-oil sectors, specifically, an increase in services GDP which stems from higher output per worker. The results are consistent with greater local demand for non-tradable services driven by highly paid oil workers.

What are the effects of oil discoveries on economic development? Although there is a long tradition in economics of studying the impact of natural resource abundance, no clear consensus has emerged in the literature. Should the discovery of oil lead to a prosperous period of high growth in both the short and long run or should countries fear the much-discussed Dutch disease? Nominal exchange rate appreciation and rent seeking can have adverse effects, as can volatility of revenues, but the large fiscal windfall associated with resource revenue can also foster development. Even when we abstract from nominal exchange rate movements and the impact of oil rents, the pure effect of the physical presence of a natural resource sector might drive up local prices—and therefore crowd out the development of other economic activities, bringing about negative effects on growth—or increase demand for workers and attract new activities, which can lead to agglomeration effects, with a positive impact on productivity and income (Michaels, 2011).

Initially, the literature focused on finding aggregate, country-level evidence of the overall impact of natural resource abundance. However, cross-country evidence was shown to be sensitive to changing periods, sample sizes, and covariates (for an overview of the literature, see van der Ploeg, 2011). To try to disentangle the various mechanisms through which natural resource production can affect development in more detail, a strand of the literature to which we contribute has shifted to within-country studies (Acemoglu and others, 2014; Dube and Vargas, 2013; and Michaels, 2011). Recent evidence indicates, however, that resource extraction is endogenous to institutions (Cust and Harding, 2014; and Arezki and others, 2015). These results indicate that places with better institutions discover more natural resources and that a simple regression of resource extraction on development indicators is thus likely to be biased and indeed overestimate the impact of resource extraction.

In order to overcome these concerns, we use the random outcomes of exploratory oil drilling in Brazil to investigate the causal effect of natural resource discoveries on local development. Specifically, we compare economic outcomes in municipalities where the national oil company, Petrobras, drilled for oil, but did not find any, to outcomes in those municipalities in which it drilled for oil and was successful. Drilling attempts were carried out in many locations with similar geological characteristics, but oil was found in only a few places. The “treatment assignment” is related to the success of drilling attempts: Places where oil was found were assigned to treatment, while places with no oil are part of the control group. The treatment assignment resembles a “randomization,” since (conditional on drilling taking place) a discovery depends mainly on luck (see Figure 1 for a map of all dry and discovery wells). Therefore, places with oil discoveries are the “winners” of the “geological lottery.” Since there were no significant royalty payments to municipalities in Brazil until several decades after the first discoveries, we are able to isolate the direct impact of oil extraction from the effect of fiscal windfalls. And since we are conducting a within-country study, there cannot be any nominal exchange rate response by construction.

The baseline results show that locations in which oil was discovered had a 24.6–25.9 percent higher per capita GDP over a span of up to 60 years compared to those in the control group (see Table 1). Furthermore, we document an increase in both manufacturing and services GDP per capita, but no impact on agricultural GDP. While the measure of manufacturing GDP includes natural resource extraction (and as such an increase is not surprising), the increase in services indicates that the spillover effects of oil production impact the rest of the economy. Additionally, we find evidence for an increase in urbanization of about 4 percentage points. This increase in urbanization is consistent with the increase in services we document. We do not find any effect on population density.

In order to shed light on whether our results are mainly driven by local price effects or real changes in the economy, we look at recent microdata from the Brazilian employment and population censuses. We find that municipalities in which oil was discovered have larger services firms, a higher density of formal services workers, and a lower fraction of workers employed in the subsistence agricultural sector than the control group. The move from rural informal work to the formal services sector explains the observed increase in urbanization and services GDP per capita. We also show that wages in the services sector adjust upwards. Consequently, we find evidence for both nominal and real effects. Lastly, the density of non-oil manufacturing firms and workers is not affected by oil discoveries.

Our findings, therefore, do not provide support for either the deindustrialization hypothesis of natural resource discoveries or positive agglomeration effects in the manufacturing sector, but they show that oil production has important real effects on the local economy and, in particular, on the services sector. Since in our setting there are no nominal exchange rate effects and no rents accrue to the municipalities, our results can be viewed more generally as testing for the impact of an investment and consumption shock in mostly rural municipalities.

It is important to stress, however, that we cannot make inference on the aggregate impact of oil discoveries on the country as a whole. Compared to national economies, municipalities are much more open and face macroeconomic policies which are invariant to their idiosyncratic conditions. 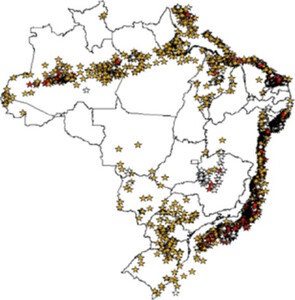