Oil prices have dropped dramatically focusing the attention on the short run. This article takes a longer view. It argues that the oil market is shaped by forces pertaining to demand and supply. A simple model integrating these forces is presented as a useful tool to explore likely scenarios. Notwithstanding the level of uncertainty surrounding the evolution of both demand and supply forces, simulations point to the emergence of supply shortages suggesting that available forecasts predicting persistently low oil prices may be too optimistic.

Oil prices have fallen by over 50 percent since June 2014. Much has been written about what triggered this slump, and the relative role of supply and demand factors. Considering that price elasticities are extremely low in the short run, disturbances, such as the shift in strategy by OPEC, can result in sharp fluctuations in prices. Simple extrapolations of recent trends would give a very misleading picture of future oil prices over the longer term. The long-run price elasticities are considerably higher, as both consumers and producers change their behavior, and adopt new technologies, and underlying developments in demand and supply come to the fore. While there is uncertainty about the evolution of these developments, there are known elements such as geology on the supply side and demographics on the demand side. Technological innovation, responding to economic incentives (e.g., the advent of shale exploitation), and to policies aimed at reducing greenhouse gas emissions (e.g., the emergence of alternative energy sources) also will play a key role in shaping the oil market.

The present article discusses the relative strength of those forces and their interplay. It also presents exploratory simulations using a novel oil model developed at the IMF to study the implications of possible future trends in supply and demand. A simulated baseline path suggests that the oil price could reach US$80 (adjusted for inflation) per barrel in 2020 and US$100 in 2025. These projections should be seen as indicative of the underlying tendency of oil prices that would prevail, barring radical changes in the future path of technology and global economic growth. Of course, geopolitical disturbances or strategic maneuvering could cause short-term movements around any such path. However, the model does provide an analytical tool to explore the consequences of a variety of scenarios.

This article attempts to answer the following questions:

What Will Drive Demand Forces?

On the demand side, growth of the global economy, especially the main emerging markets will continue to drive demand for oil. By 2025, oil demand will likely grow by 9 to 12 million barrels per day (mb/d) from the current 91 mb/d—i.e., by 10 percent or more. This forecast accounts for continued efficiency gains in the use of oil. Efficiency in oil use has increased rapidly over the past decades through the adoption of energy saving technologies. The oil-consumption-to-world-GDP ratio declined by 60 percent between 1980 and 2013, with most of the decline accounted for by the advanced economies. Emerging markets are likely to experience similar efficiency gains in the future but of a more modest size, as energy intensive industries have migrated from advanced economies to emerging markets.

Petroleum product usage faces competition, particularly from natural gas, the cleanest source of energy among fossil fuels. Globally, in power generation, coal, nuclear power, and natural gas are major energy sources, and renewable resources have a growing presence—in part because of subsidies. The share of oil in global primary energy consumption has declined, from 50 percent in 1970 to about 30 percent today, whereas natural gas consumption has risen steadily, and now accounts for nearly 25 percent of consumption. Natural gas consumption is projected to increase strongly in the medium term according to the International Energy Agency, at the expense of oil, with emerging market and developing economies accounting for the bulk of the growth. Oil is expected to remain by far the most important source for transportation, but natural gas is expected to make inroads—e.g., use of liquefied natural gas in shipping.

What Will Drive Supply Forces?

On the supply side, it is important to distinguish between different sources to understand the underlying trends. Conventional oil production, accounting for 80 percent of current production is depleting rapidly. The very large investments in the development of known reserves that have taken place over the past decade will help only to stabilize conventional production. On the unconventional front, we should distinguish between the low-cost tight (shale) oil versus higher-cost sources, including deep water and oil sands. The latter is economical at relative prices above US$80 to US$90, while new deep water wells can be economical above US$50 to US$60.

Depletion of conventional oil is estimated at 6 percent a year, which would mean a reduction in supply of about 20 mb/d over the next 10 years. There are however 17 mb/d of known oil reserves in the process of being developed. Shale oil has been growing in importance, and has enjoyed rapid efficiency gains during the early stage of the investment cycle. Shale oil has the potential to increase to 12 mb/d production from the current level of 5 mb/d. Oil sands and deep water sources could each provide an additional 4 mb/d.

Over time, the balance between supply and demand forces will tend to lead to upward pressure on oil prices, up to a point where higher-cost oil sources become economical. Shale oil is likely to provide a price ceiling in the short to medium term, because of the fast improving cost structure and potential.

The model is based on an extension of Benes and others (2012).1 The world oil supply equation captures both depletion and technological developments. The world oil demand function includes the real price of oil, and world GDP.

The depletion forces are captured by the so-called Hubbert linearization, where annual production is approximated by the logistic curve:

qt represents annual world oil production at time t, Qt represents cumulative production until time t, and represents ultimately recoverable resources (URR) (assumed in the most simplistic case to be a geological constant). This specification entails that oil is harder and harder to extract as cumulative production increases. Production peaks at the point where half of the URR has been extracted. Benes and others (2012) show that this view about peak oil can be strongly rejected by the data compared to a more flexible model where supply also responds to the price of oil.

The logistic curve is augmented by the present and past prices:

An increase in prices encourages producers to speed up production from existing fields. Over the medium run (in practice 4 years or more) higher prices lead to more intensive development of known fields, new exploration, and/or better technologies—hence the additional, 4–6 year, lagged response.

The model was estimated using non-linear Bayesian techniques, with fairly tight priors based on previous studies for oil demand, and GDP variables. For the supply equation, where there is almost no guidance from previous studies, very loose priors are used within a nonlinear technique (the extended Kalman filter). The model is estimated as a system. Because it contains an endogenous breakdown of output into trend and gap components, a diagonal covariance matrix is imposed as an identifying assumption. The posterior distributions of parameters are obtained using an adaptive random-walk algorithm.

What Do Model-Based Scenarios Tell Us?

We present a baseline scenario, and two alternatives, for the next decade. The alternative simulations use different assumptions about supply and demand, to emphasize the importance of uncertainty, and the crucial role of underlying assumptions about long-term factors.

In the baseline scenario shown in Figure 1, medium-term world GDP growth is assumed to be 3.6 percent. Production expands strongly, reaching 102.5 mb/d in 2025. But the oil price moves up gradually to around US$100 in 2025, to allow higher cost production to become economical. Tight (shale) oil production can provide only about 7 mb/d of additional supply in 2025, not enough to meet additional 11.5 mb/d demand. The remainder of the production increase comes from higher cost resources such as deep sea and oil sands.

The first alternative scenario assumes 4 percent world GDP growth. Higher growth leads to larger increase in oil demand, and oil production reaches 103.5 mb/d in 2025. Oil price increases to US$110 in real terms in 2025 to get the additional production.

The second alternative assumes that the higher cost oil resources, namely deep sea and oil sands, are impossible to extract, due to, for example, environmental concerns. Production increases to 100 mb/d in 2023, when tight oil production reaches its potential. As higher cost resources cannot be extracted, production peaks at that point. Thereafter, because of depletion, production declines to 98.8 mb/d in 2025, and prices reach US$130 in real terms. GDP growth is lower than in the baseline decreasing to 3.4 percent.

These scenarios are intended to be illustrative, to show the enormous uncertainty around the fundamental forces at play. One could come up with a wide range of possible alternatives, using different assumptions along many dimensions. These include energy efficiency, substitution from oil to other energy sources, and climate change policies. As can be seen in Figure 1, the outlook for oil prices in the futures market would be consistent with some very optimistic assumptions about future oil supply and some very pessimistic assumptions about world growth.

A more detailed discussion will be presented in a forthcoming IMF working paper.

The analysis here is adapted from Deffeyes (2005). 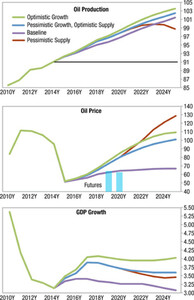