China’s remarkable growth has been hailed as the greatest development story of all time. However, its success is somewhat undermined by a sharp rise in income inequality. While most countries have also become less equal since 1990, the deterioration has been especially severe in China’s case and has left it among the most inequitable societies in the world. Could China’s growth model—with its emphasis on exports and investment, and its more recent dependence on credit—itself be at fault?

China’s remarkable growth has been hailed as the greatest development story of all time. However, its success is somewhat undermined by a sharp rise in income inequality. While most countries have also become less equal since 1990, the deterioration has been especially severe in China’s case and has left it among the most inequitable societies in the world. Could China’s growth model—with its emphasis on exports and investment, and its more recent dependence on credit—itself be at fault?

Since embarking on its reform and opening-up policy, China has made remarkable strides in lifting incomes and reducing poverty. On the eve of its reforms, nearly 85 percent of its population lived on less than $1.25 a day, the fifth largest poverty incidence in the world. Today, this proportion has fallen to around 13 percent, well below the developing country average.

However, a subtext to this success is that it has come at the cost of rising inequality. According to the World Bank, China’s Gini index—which ranges from 0 (perfect equality) to 100 (perfect inequality)—increased from 0.29 in 1981 to over 0.42 in 2005. Notwithstanding a downtick since 2009, official Chinese estimates report a Gini coefficient of over 0.47 in 2012, higher than in the United States. Over this period, geographical and wage disparities have increased sharply, as have capital incomes—from property and entrepreneurial activity—which are always more unequally distributed but were virtually non-existent in China prior to its reforms. As a result of this rise in inequality, those in lower parts of the income distribution have not seen their living standards rise as much as others.

Of course, rising inequality has been a near global phenomenon in the last two decades, with the important exception of Latin America. Across the globe, there is increasing dissatisfaction with the quality of recent economic growth, which is often seen as benefiting certain groups more than others. This is clearly reflected in rising disparities between different groups, with the rich getting richer and faster than the poor. The economics literature has attributed this mainly to globalization, skill-biased technological change, and the decreasing bargaining power of workers.

Even within this global setting, however, China stands out. The rise in inequality has been particularly pronounced, leaving China—which was a highly equal society on the eve of its economic reforms—among the most unequal countries in the world today (Figure 1). Its experience is also a departure from Asia’s past record, contrasting sharply with the three-decade record of equitable growth in Japan, the Newly Industrialized Economies, and the ASEAN countries between the 1960s and 1980s. “Growth with equity” was the mantra during this period, as the Asian tigers, unlike Latin America, successfully combined speedy economic growth with relatively low—and in many cases falling—inequality. This ensured that the economic gains from growth were shared widely.

To summarize, China’s development has been highly proficient in lifting people out of poverty but has tended to benefit the relatively well-off even more. As a result, China’s growth has been less inclusive than in most other developing regions, including Latin America and a number of its Asian peers (Balakrishnan, Steinberg, and Syed, 2013). This is a worrying phenomenon. The academic literature and recent events in different parts of the world have highlighted the detrimental impact of high inequality on economic and social stability and the sustainability of growth.

Our recent paper (Lee, Syed, and Wang, 2013) uses the Shapley value decomposition technique to assess the factors behind the rise of inequality in China. This procedure addresses shortcomings of older techniques, notably that only certain measures of inequality could be used and simultaneous decomposition into different factors was difficult. In broad terms, the Shapley procedure allows the derivation of an exact additive contribution for each factor to total inequality.

We find that, in many ways, inequality may have been an inevitable by-product of China’s investment and export-led growth model. As described below, the model that China has followed in the last three and a half decades has to some extent involved a trade-off between rapid rates of growth and worsening inequality (see also Fan, Kanbur, and Zhang, 2009; and Dollar, 2007).

China’s growth model has created wealth through investment-induced capacity growth, largely in the manufacturing sector. In terms of sectors, this rapid capital accumulation in manufacturing has kept the value added per worker in the industrial sector high throughout the last few decades. A large share of this value added, however, went to the corporate sector as wages were suppressed by the strong influx of young workers into the labor market associated with China’s demographics and the move of migrant workers into urban centers, where industries were concentrated. More broadly, by favoring capital, China’s growth model has tended to benefit the corporate sector more than workers, and thus less of the benefits of growth, accrued to household income.

“We find that, in many ways, inequality may have been an inevitable by-product of China’s investment and export-led growth model.”

The east coast developed first for geographical reasons, benefitting from trade and foreign direct investment. This unbalanced growth strategy in turn propagated income gaps based on skills, sectors, and location. Between Chinese households, those who were living in urban centers had access to better education and medical facilities, by virtue of residing in industrial centers where wealth was generated. Moreover, coastal provinces—China’s export heartlands—also provided more opportunities for nonagricultural employment and income. Thus, the central and western regions historically have had a slower pace of income growth when compared to the export heartlands on China’s eastern coast, and this adds to the widened income gaps between provinces.

Explicit policies also contributed to rising disparities within geographical areas. Because of the household registration system (hukou), migrant workers had less access to social services. Larger corporations could afford to pay their employees better, not only because of gains from natural economies of scale but also because they enjoyed better and cheaper access to financing under China’s state-led banking system.

In addition, this model has become more dependent on liquidity rather than productivity gains during the period around the global crisis, exacerbating disparities. Monetary policies that create excess liquidity beyond that warranted by cyclical considerations can have a differential impact on different sectors of the economy, benefiting those with access to credit and those holding assets whose price rises beyond fundamentals (Han and Lee, 2012). Ample liquidity in China has also facilitated investments in some inland provinces that have become less efficient and wasteful, generating relatively more profit for the corporate sector, with relatively temporary and limited spillover onto household incomes (Lee, Syed, and Xueyan, 2013). Yet another channel is through controls in the financial system, under which resources on the order of 4 percent of GDP are transferred from households and small and medium enterprises (SMEs) to large corporations every year (Lee, Syed, and Xueyan, 2012).

Income gaps were inevitable under the growth model described above. Rising skill premia pushed up the wages of managers who were in relatively short supply compared to the large influx of young and migrant workers, larger corporations were able to pay better due to stronger competitiveness and better access to finance, while those in the manufacturing sector received higher pay than those who remained in the agricultural sector because of productivity differences. Geographically, being at the source of wealth creation, those in urban centers received better wages and social services than in rural areas, while those in the east coast areas prospered relative to inland provinces because of external trade and their larger productive capital stocks.

Consistent with these effects, we find that among Chinese households, the most important factors explaining income inequality are education, access to health insurance, and labor market variables, including sector of employment and enterprise size (Figure 2). Across China’s provinces, differences in per capita incomes are driven by the relative level of urbanization, financial access, privatization, and capital-intensity. Importantly, we find that public spending can dampen geographic disparities, as it has done since the “Go-West” Policy of 2000.

Based on these findings, a number of policies could help broaden the benefits of growth in China. These include prudent monetary policy, higher public spending on health and education, deregulation and reforms to increase competition, measures to raise labor incomes and assist vulnerable workers, and better access to finance for both households and SMEs, including in rural areas.

Apart from arresting the rising tide of inequality in China, many of these policies also have the potential to rationalize savings and boost household incomes, reducing the bias toward capital and large corporations, and unshackling consumption. In this way, they would have the positive side effect of facilitating the needed rebalancing of China’s growth model toward households, workers, and consumption.

Inequality in China: Contribution of Factors

(in percent of overall Gini during 2000s) 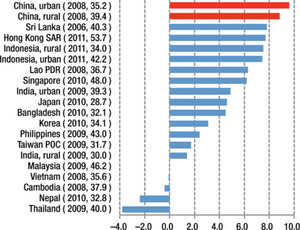 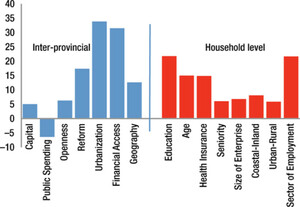