Question 1. What is financial interconnectedness?

Financial interconnectedness refers to direct and indirect linkages among financial institutions. These linkages can take many forms. For example, contractual connectedness is the dependency of one institution on another that stems from contractual obligations (such as ownership, loans, and derivatives) between the two institutions. Banks that participate in the interbank market, for instance, become interconnected as they become exposed to one another through lending and borrowing operations. Financial institutions also create common exposures when they invest in the same asset; this is a more complex and less studied type of linkage.

Both types of linkages are closely related to economic phenomena such as financial contagion and spillovers. Financial contagion is the process by which an adverse shock at one financial institution can have negative consequences for many others. Contractual connectedness in the interbank market can lead to interbank contagion, by which the default of one bank leads to losses and the subsequent default of another bank. This may trigger a default cascade. Interconnectedness due to common exposures can lead to spillovers and correlation in bank performance. When a liquidity-constrained bank sells off its assets, other banks may incur losses due to the assets’ falling market price and mark-to-market pricing.

Analyzing the interconnectedness of economic agents—the ways in which they are directly and indirectly connected—can thus help sharpen our understanding of contagion and spillovers.

Question 2. What can be learned from modeling financial interconnectedness among economic agents as a network?

One of the key lessons from the global financial crisis is that it is not sufficient to supervise banks at the micro level, that is, by monitoring their balance sheets in isolation. Rather, microprudential supervision needs to be complemented with macroprudential oversight, which takes financial interconnectedness into account. Network theory can help us understand the complex structure of modern financial systems. Using insights from the network formation literature, we can analyze how markets are formed and how they evolve over the business cycle. When we model the set of financial linkages as a complex network, we can use the rich set of tools from network theory to assess the stability of the financial system. We can also better understand which areas of the financial system are most vulnerable to shocks, which banks’ defaults trigger more subsequent defaults, and how contagion spreads.

Question 3. Is there a link between the structure of a financial network and financial stability?

One of the most mature areas of financial network research looks at how an initial default is transmitted to the rest of the financial system. Will the default cascade “die out” after a few rounds, or will it eventually cause a systemic breakdown? Network theory shows that many financial networks exhibit a so-called tipping-point property: below a critical level of interconnectedness, initial defaults are contained irrespective of the network structure. Above this threshold, however, initial defaults can turn systemic, leading to the collapse of the entire financial system. This leads us to ask under which conditions the structure of financial interconnectedness matters for contagion. Georg (2013) shows that during periods of macroeconomic stress, the network structure determines the extent of contagion. Furthermore, some network structures are more resilient to random shocks than others. Roukny and others (2013) show that there is no network structure that is universally most robust.

Question 4. What does financial network analysis tell us about social efficiency?

Most studies on financial networks assess the resilience of different network structures to initial shocks but do not undertake welfare analysis. A recent strand of the literature analyzes the efficiency of the resource allocation process in markets that can be modeled as trading networks. Gofman (2012) shows that intermediation in over-the-counter markets (such as repo markets) can lead to inefficient resource allocation when the network is insufficiently dense. This work establishes a link between network structure and efficiency and raises important questions about optimal network structure. Are resilient networks also socially efficient? Can trading in a less resilient, but more efficient financial network, also be welfare-improving? Answering these questions will be critical for the study of macroprudential regulation.

Question 5. What do empirical financial networks tell us about contagion and systemic risk?

There is relatively little empirical work in this area largely because granular data are scarce. Hale, Kapan, and Minoiu (2013) map the network of interbank exposures created through syndicated lending for more than 5,500 global banks. Through these bank-level linkages they then trace the direct and indirect channels of crisis transmission. Direct channels refer to cross-exposures by which the default (non-payment or loan restructuring) by a borrower would impair the financial performance of its lender. Indirect channels refer to chains of banks in which payment default by a borrower would trigger a chain reaction. Such an event would affect not only the financial performance of the bank’s immediate lenders, but also that of the lenders to those banks, the lenders to the lenders of those banks, and so on. They find that higher bank exposures to crisis countries are associated with lower bank return on assets, whereas higher exposures to non-crisis countries leave bank profitability unchanged.

Using data from the European large-value payment system TARGET2, Gabrieli and Georg (2013) show that a bank’s position in the interbank network prior to a liquidity shock has a significant impact on the bank’s access to liquidity after the shock. They focus on ultimate providers and users of liquidity. Providers are typically smaller banks that transfer liquidity to users along an intermediation chain within the financial network. Banks that obtain liquidity through longer intermediation chains are more vulnerable to disruptions along the chain and thus have a harder time obtaining liquidity after the shock. Their paper illustrates how money market freezes can better be understood through the lens of network analysis.

Cai, Saunders, and Steffen (2014) show that interconnectedness of banks through common asset exposures is a major source of systemic risk. It turns out that many of the top originators of syndicated loans are both highly interconnected and on the Financial Stability Board’s list of Global Systemically Important Financial Institutions. Banks’ degree of interconnectedness in the co-syndication network is a predictor of their contribution to systemic risk. This study shows that there are both a bright and a dark side to loan syndication: while it offers opportunities for portfolio diversification, it also leads banks to concentrate risks and become more vulnerable to systemic shocks.

After the global financial crisis, central banks and regulators have stepped up efforts to improve their early warning systems (EWS). The previous literature, which was concerned mostly with currency and debt crises in emerging markets, had identified early signal indicators such as high credit and asset price growth, low international reserves, real exchange rate overvaluation, and excessive short-term and foreign debt. The global financial crisis has shown that financial interconnectedness—a factor previously ignored in EWS—has been a potent factor in amplifying shocks and transmitting them across borders.

Minoiu and others (2013) examine the link between country-level indicators of interconnectedness in the global banking network (visualized in Figures 1 and 2) and the likelihood of systemic banking crises. They compute two types of network-based indicators: (i) the number and intensity of countries’ financial links; and (ii) the number and intensity of their neighbors’ links. The results show that a country’s own interconnectedness rises markedly a few years before the onset of a crisis, and levels off afterwards. In addition, a country’s neighbors experience a decline in interconnectedness before the onset of a crisis in that country. Their models predict crises more accurately—both in and out of sample—when they include financial connectedness measures in addition to standard macroeconomic variables. The implication is that network-based indicators of connectedness have rich informational content that could be exploited to improve existing EWS.

Question 7. What are the policy implications of recent research on financial connectedness?

Recent research on financial networks shows that there is much to learn about the resilience of financial systems from network theory. Some of the policy-relevant lessons from this growing literature are that:

Future research should focus on better understanding the structure of financial networks originating not just from interbank liabilities, which are relatively well studied, but also from other linkages such as derivative contracts, common exposures, and ownership. Ongoing efforts to enhance regulatory data collection and dissemination practices, both at the national and international levels, can help narrow the gap between the theory and empirics of financial networks, and further support the development of recommendations for policy. 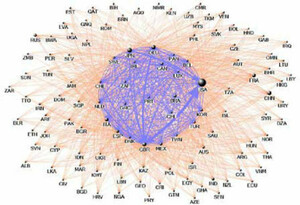 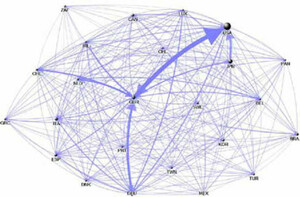