Labor market duality has increased dramatically in many advanced countries in recent years. While duality has some positive aspects, microeconomic and cross-country studies suggest that an excessive reliance on “non-regular” employment has a negative impact on total factor productivity (TFP) and growth. This article summarizes recent research on this topic, and draws some policy implications for reforms aimed at reducing duality and creating more inclusive labor markets in advanced economies.

Labor market duality has increased dramatically in many advanced countries in recent years. While duality has some positive aspects, microeconomic and cross-country studies suggest that an excessive reliance on “non-regular” employment has a negative impact on total factor productivity (TFP) and growth. This article summarizes recent research on this topic, and draws some policy implications for reforms aimed at reducing duality and creating more inclusive labor markets in advanced economies.

Labor market duality—a two tier job market—has increased dramatically in many advanced economies in recent years. This has resulted in a growing share of “non-regular” workers, with a much lower level of employment protection, as well as lower wages and career prospects compared to “regular” workers. The definition of non-regular employment changes from country to country, but one indicator available for international comparisons, the share of temporary workers, averaged 12 percent in OECD countries in 2011 and reached 25 percent in Spain. This indicator is likely to underestimate the real size of duality in many countries, because while virtually all temporary workers are non-regular workers, non-regular workers are not necessarily only temporary ones. In Japan, for example, the share of non-regular workers—including part-time, temporary, and other types of contracts outside the so-called “lifetime employment model”—was below 20 percent before the burst of the bubble in the early 1990s, but has now reached 35 percent.

Labor market duality has some positive aspects. For example, it can help satisfy demand for flexible work arrangements, thus bringing new “voluntary non-regular” workers into the workforce. In some countries the possibility for firms to hire a growing part of the labor force with more flexible contracts can also help lower overall unemployment. In Japan, even during the 2009–10 global economic crisis, unemployment remained just slightly above 5 percent, compared to the 8 percent average in OECD countries, partly because of firms’ reliance on non-regular contracts.

Despite these positive aspects, international evidence and macroeconomic studies suggest that the overall impact of excessive labor market duality on total factor productivity (TFP) and growth is likely to be negative. Dolado and others (2011) find that 20 percent of the productivity slowdown in Spanish manufacturing between 1992 and 2005 was due to reliance on temporary work. Similarly, Damiani and others (2011) conclude that deregulation of temporary contracts negatively influences the growth rates of TFP in a panel of 14 European Union countries, especially in industries that rely more on short-term positions.

This negative effect is probably magnified by working involuntarily as a non-regular employee, which can adversely affect morale and job effort, thus lowering labor productivity. In this regard, Fukao and others (2007) estimate that Japanese part-time workers are 75 percent less productive than full-time ones. Limited training opportunities for non-regular workers are also likely to reduce productivity. IMF (2013) stresses that firms tend to invest little in their temporary workers in countries with dual labor markets. This is confirmed by a survey of 1,066 Japanese companies, which shows that while 92 percent of the companies provided training for regular workers, only 42 percent did so for non-regular workers (Kawaguchi and others 2006).

In addition to employment protection legislation, several other institutional, demographic, and macroeconomic factors have an impact on the degree of labor market duality. In particular, the unemployment rate has a positive impact on duality, suggesting that higher levels of unemployment make it easier for firms to impose temporary contracts on workers. Inflation has a negative and significant impact. One possible explanation for this result is that workers are less motivated to seek employment in better-paid regular jobs when inflation is low.

The empirical results of Aoyagi and Ganelli (2013) are consistent with those of two other papers, which study the determinants of temporary employment, Jaumotte (2011) and Nunziata and Staffolani (2007). While these papers use different samples and model specifications, they also find that increased employment protection of regular workers increases labor market duality.

One policy implication of the findings by Aoyagi and Ganelli (2013) is that reducing the difference in the degree of employment protection between the two categories of workers can go a long way in reducing duality in advanced economies, with positive effects on TFP and growth. In the case of Japan, Aoyagi and Ganelli (2013) estimate that such a reform could bring the share of non-regular workers close to or below 30 percent, from its current level of about 35 percent. The study also stresses that these estimates are based only on ceteris paribus first-round effects. If, as expected, the reduction in labor market duality results in higher growth, this would reduce unemployment and help exiting deflation. According to the econometric results presented in the study, a fall in unemployment and an increase in inflation would result in second-round effects of the initial reform, which would further reduce duality.

Since about 70 percent of non-regular workers are women in Japan, reducing duality would also increase the number of women in regular positions, creating synergies with reforms aimed at increasing female labor participation, which are important to raise potential growth (see Steinberg and Nakane 2012).

In practice, an effective way to reduce the difference in the degree of labor protection amongst different workers in Japan could be replacing all regular and non-regular contracts currently offered to new hires with a single open ended contract (SOEC). Under the SOEC, employment protection would increase gradually and severance pay would rise with tenure. The SOEC would imply lower job security compared to current regular employment, but higher job security compared to current non-regular employment. This kind of reform would be likely to help not only Japan but also other advanced countries. Simulations carried out by García-Perez and Osuna (2011), for example, suggest that introducing an SOEC would significantly reduce labor market duality in Spain.

The introduction of the SOEC could be complemented by a shift toward the so-called “flexicurity” model, in which the focus is on protecting workers rather than jobs. In this regard, increasing unemployment insurance benefits and strengthening programs which help the unemployed to upgrade their skills would be relevant for Japan—where occupational skill mismatches are important determinants of the unemployment rate (Shibata 2013)—as well as for some other OECD countries such as Southern European ones.

In most cases, the labor market reforms discussed in this article should be part of a broader strategy aimed at raising potential growth through structural reforms in advanced countries. In particular, by contributing to a more inclusive growth, reducing labor market duality could help generate support for structural reforms—for example, trade liberalization—which can increase potential growth in the medium term but which can involve short-term costs for some segments of the population. 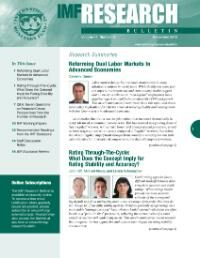