Procyclical policy has been a problem for emerging markets (EMs). This contrasts sharply with advanced markets (AMs), where policies tend to be countercyclical. Much attention has been given to the cyclical nature of fiscal policy in emerging markets. The literature provides ample evidence that fiscal policy in emerging markets has been procyclical, but with recent work finding it has become less so due to stronger institutions (Gavin and Perotti, 1997; Lane, 2003; Akitoby and others, 2004; Kaminsky, Reinhart, and Végh, 2005; Talvi and Végh, 2005; Alesina, Campante, and Tabellini, 2008; Ilzetzki and Végh, 2008; and Frankel, Végh, and Vuletin, 2012).

Robustness tests confirm our findings. Using variants of the Taylor rule, we find a strong relationship between our correlation measures and the estimated coefficients from Taylor rules (i.e., on the output gap). Moreover, our CoMP measure is very strongly correlated to the correlation between monetary aggregates (private credit) and output gaps over the sample period, implying that CoMP is a good proxy for monetary policy stance even if the stance is characterized by monetary aggregates (see Figure 3).

Past research has also attempted to explain both the differences across emerging markets and over time in the degree of monetary policy cyclicality. Coulibaly ascribes improvements in countercyclicality in emerging markets to macroeconomic fundamentals, vulnerabilities, financial sector reform, and inflation targeting (IT). Végh and Vuletin (2012) regard the lack of exchange rate flexibility, in turn related to institutional quality, as a key determinant. Our research relates monetary policy cyclicality (CoMP) to a variety of explanatory variables, including the monetary policy regime, the exchange rate regime, financial market development, and institutional strength.

The results were surprisingly weak for many remaining explanatory variables analyzed. The bilateral estimation for exchange rate regime and financial deepening are both statistically insignificant when considered individually. Variables that are not shown, but were also found to be insignificant under various specifications, include private credit, capital account openness, terms of trade shocks, the fiscal deficit, public debt, and GDP growth volatility.

Scatter plots confirm that more countercyclical monetary policy is associated with lower levels of output volatility (Figure 4). We also investigate the impact on inflation volatility but results are inconclusive despite a tendency for both output variability and inflation variability to be highly correlated. Regression analysis substantiates that this result is robust to controls for external volatility. These findings are also consistent with previous work on emerging markets. Lane (2003), for example, shows that procyclical macroeconomic policies in emerging markets have been associated with more extreme cyclical fluctuations in output.

In conclusion, recent research, including at the IMF, confirms that emerging markets have adopted increasingly countercyclical monetary policy over time, driven by inflation targeting and better institutions. This countercyclical policy is associated with less volatile output, suggesting large economic benefits.

Cyclicality of Monetary Policy (CoMP) is derived as the 10-year window of rolling correlations between the real interest rate (nominal interest rate minus actual inflation) and the output gap. 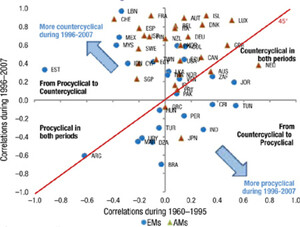 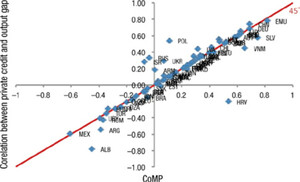