Jump to Content Jump to Main Navigation
The Economics of Political Transitions: Implications for the Arab Spring

Ongoing political transitions in many Arab countries have led to social unrest and an economic downturn, raising concerns about the speed and strength of economic recovery. This article identifies and examines comparable historical episodes of political instability and social unrest to derive implications for the near- and medium-term economic outlook in the Arab Countries in Transition (Egypt, Jordan, Libya, Morocco, Tunisia, and Yemen). In general, past episodes of political instability were characterized by a sharp deterioration in macroeconomic outcomes and a sluggish recovery over the medium term. Recent economic trends in the Arab Spring countries seem to be unfolding along similar lines, although the weak external environment and large fiscal vulnerabilities could result in a prolonged slump.

Two years after the onset of the Arab Spring, political tensions remain high and social unrest has continued among the Arab countries in transition. Egypt is facing serious economic challenges and erosion in investor confidence as social and political tensions remain high despite the democratic election of a president and ratification of a new constitution. Tunisia, where the democratic transition is relatively advanced, continues experiencing social disruptions, which in turn affect economic activity. Similarly, political transitions have advanced in Jordan, Morocco, and Yemen to varying degrees. Overall, these political transitions have been accompanied by a downturn in economic activity, raising questions over the pace and strength of economic recovery.

To draw inferences for the near-term outlook within Arab countries in transition, Khandelwal and Roitman (2013) have examined past episodes of intense political instability similar to what has occurred in these Arab nations. This approach contrasts with studies that have examined transitions towards democracy, including European transition economies and countries that have experienced little social unrest (Freund and Jaud, 2013; Credit Suisse, 2011).

Various studies in the literature document a bi-directional relationship between economic growth and political instability. For instance, Alesina and others (1996) find that countries and time periods with a high propensity of government collapse are associated with significantly lower growth. Alesina and Perotti (1993) find that socio-political instability has an adverse impact on investment. Credit Suisse (2011) finds that regime change can often be derailed and countries often face multiple waves of unrest. In general, the literature covers a large and heterogeneous set of episodes of political instability, while examining a relatively small set of macroeconomic variables.

By examining a larger set of macroeconomic variables, the authors provide a more comprehensive picture of the near-term outlook. A key finding is that, in past episodes similar to the experiences of the Arab countries in transition, political instability coincided with a large decline in output and real GDP growth rates. Declines in output ranged between 1 and 7 percent in the event year (Figure 1, shaded portion reflects range between first and third quartile), and actual growth rates dipped below trend during the year of the event and in subsequent years. The decline in output was driven by a large fall in investment, while consumption remained broadly resilient. It is noteworthy that the recovery was sluggish—output remained below potential for four years after the initial drop, taking around five years for the recovery. Unemployment rates rose during the episode of political instability by about 1 to 1½ percentage points on average, during the first two years and took between four to five years to return to pre-crisis levels.

Economic activity in the Arab transition countries is unfolding along similar lines: countries with greater political instability (Egypt, Tunisia, and Yemen) experienced significant declines in real GDP in 2011, while Jordan and Morocco only saw growth rates dip below long-term trend (PPP-weighted averages for the transitional Arab countries are represented by the dark line in Figure 1). Consumption has remained relatively resilient, while investment has fallen sharply. Unemployment rates have increased from already high levels.

As a consequence of falling revenues and higher expenditures, past episodes of political instability were characterized by a deterioration in the overall fiscal balance of about 1 percent of GDP during the event year, and a cumulative 1¾ percent of GDP in the subsequent two years. Revenues recovered slowly, so that fiscal deficits returned to pre-crisis levels only in year T+4 (Figure 2). The deterioration in fiscal balances and the decline in GDP had an adverse impact on government debt (in percent of GDP).

It is clear from Figure 2 that the Arab countries in transition entered a state of political instability with much higher fiscal deficits than previous political transitions, and have seen a larger deterioration in their fiscal positions during 2011–12. Their overall fiscal deficit increased in 2012 (relative to 2010) by about 2½ percent of GDP owing to a decline in revenues, as well as an increase in public expenditures, especially on untargeted food and energy subsidies. Government debt also rose. Going forward, while the countercyclical fiscal stance has helped mitigate the economic downturn, the lack of fiscal space will require a large fiscal consolidation to restore debt sustainability that will weigh on the recovery. Mobilization of external financing can help smooth the adjustment.

Although most countries in our sample had large current account deficits before the occurrence of political instability, not all of them saw an improvement in the subsequent five years. More generally, investor confidence suffered as a result of the political instability, and inward FDI fell (Figure 3). Official external assistance was often delayed. The already large current account deficits and lower capital inflows led to a decline in international reserves in many countries.

Against this background, some countries with high external vulnerabilities, comprising both fixed and flexible exchange rate regimes, faced difficulties in maintaining stable exchange rates and prices during the political crisis. As pressures on reserves intensified, policymakers allowed large currency depreciations, which fed into inflation. On the other hand, in countries with manageable external vulnerabilities, exchange rates and prices remained stable. Improvements in the real effective exchange rate occurred over the medium term and helped reduce current account deficits in some countries.

Among the Arab countries in transition, external current account deficits have widened during the 2011–12 period by around 2 percent of GDP. FDI and other financial inflows have fallen, and gross official reserves have declined sharply. In this regard, policymakers in these particular Arab countries have limited exchange rate movements in 2011–12, while inflation developments remained generally benign. In early 2013, as international reserves continued to fall in Egypt, policymakers allowed greater exchange rate flexibility with the potential for inflation to increase. Going forward, as political reforms progress, policymakers in many countries in the region are looking to develop a richer monetary policy toolkit (including greater exchange rate flexibility) to help address rising external vulnerabilities and strengthen external competitiveness.

The experience of other countries is instructive for the Arab countries in transition, both in terms of similarities and differences. Many of the economic trends that have characterized historical episodes of political instability have become evident in this group of countries. Output declined in 2011 in Egypt, Tunisia, and Yemen, but remained more stable in Jordan and Morocco. Economic activity has remained at low levels in 2012, and similar to past episodes of political instability, unemployment has increased. Macroeconomic stability has come under pressure as fiscal deficits have widened from already high levels, and external current account deficits have deteriorated. International reserves have declined. Inflation has remained muted in most countries due to weak aggregate demand.

In terms of prospects over the medium term, economic recovery in the Arab countries in transition could be delayed even more than in past episodes of political instability. Weak external demand (especially from European trading partners), high food and fuel prices, and the need for sizable fiscal consolidation due to weak initial fiscal positions are likely to weigh on the recovery. Pressures on fiscal and external stability are also likely to be more intense. Although policy actions can help mitigate some of these adverse factors, weak transitional governments may find it politically difficult to implement measures to maintain macroeconomic stability and avoid a prolonged growth slump.

Measures that need to be implemented include a growth-friendly fiscal adjustment to reduce generalized subsidies, bolster investment, and strengthen targeted social safety nets. International financing could facilitate a gradual fiscal adjustment. Greater exchange rate flexibility could improve the ability of the economy to withstand and cope with external shocks, while implementation of institutional and regulatory reforms could raise potential growth and create greater and more equal access to economic and employment opportunities. As populations see new governments deliver higher standards of living, this will also reduce the likelihood of a recurrence of political instability. 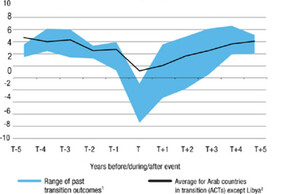 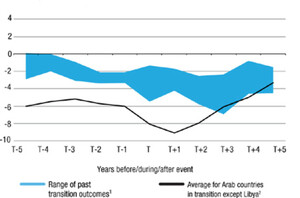 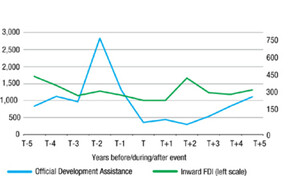