IMF programs usually provide both financial assistance and a set of policy prescriptions which are deemed to help restore economic health. Given the high-profile nature of many of those programs, a large literature studies the effects of IMF programs on economic outcomes such as growth and inflation. However, given the large number of factors, other than IMF programs, that influence these economic outcomes it has proven difficult to obtain any convincing results. Depending on the exact methodology used, results range from a significantly negative to a significantly positive impact with many studies finding no effect (for differing views and conclusions on the effect see for example Dicks-Mireaux, Mecagni, and Schadler, 2000; Przeworski and Vreeland, 2000; and Barro and Lee, 2005).

More recently, the emphasis has shifted to evaluating the impact of IMF programs on structural reforms since the conditions attached to IMF programs directly relate to such reforms. One might expect conditionality to directly trigger reform as a prerequisite for obtaining funding, and also indirectly create a consensus within national governments that reforms are needed. On the other hand, it has also been argued that IMF programs delay reforms by reducing the market pressure on governments or supporting governments generally unwilling to reform (see for example Dreher, 2007, and Beazer and Woo, 2011, for evidence supporting the latter hypothesis).

In a recent paper, we add to the above studies by taking a more complete view of IMF activities (Arezki, Lui, Quintyn, and Toscani, 2012). Besides providing liquidity through IMF programs, the IMF also supports its member countries with so-called capacity development, which comprises both training of officials and technical assistance. Training courses focus on a broad variety of topics that include all aspects of macroeconomic policy, national statistics, and finance. Courses are offered either in a regional location or at IMF headquarters in Washington, DC. Technical assistance is provided by the IMF in its areas of core expertise including in macroeconomic policy, tax policy and revenue administration, and exchange rate systems.

By combining a novel data set on capacity development and a novel data set on structural reforms we are able to test a number of hypotheses on the effect of IMF capacity development on structural reforms and specifically on how IMF capacity development and programs interact. The data on structural reforms were compiled by the Research Department of the IMF for a sample of 150 countries. The indices describe the degree of regulation of six sectors covering both real sectors (product and agriculture markets, trade, and current account) and financial ones (domestic financial markets and capital account). Each index contains different sub-indices summarizing different dimensions of the regulatory environment in each sector. Indices are normalized between 0–1, where 1 refers to “most liberalized.” Ostry, Prati, and Spilimbergo (2009) provide a detailed discussion on the construction of indices and sub-indices. Note that we only focus on how IMF capacity development and IMF programs impact on the above measures of economic liberalization. The effect of economic liberalization on economic performance as measured for example by the above indices is a hotly debated topic; and we leave this topic as an open question.

To measure IMF capacity development we have constructed an exhaustive data set, covering both training and technical assistance to IMF member economies. IMF training data are available from 1981 to 2011. The data set is a compilation of tabulated information from the IMF’s Institute for Capacity Development s (ICD) Participant and Applicant Tracking System (PATS), which tracks civil servants who participate in IMF ICD (formerly IMF Institute) training courses. PATS provides data on the country of residence, agency, age, gender, position, and detailed educational background of applicants (for a detailed discussion of this data set see Arezki and others, 2012). In our regression analysis, we use information on the number of officials trained from any given country to capture the impact of training and at the same time we use information on the number of applicants from any given country to control for a government’s willingness to build capacity. The IMF technical assistance data is available for a shorter time series only, namely the 1990–2012 period. We measure technical assistance as the number of IMF staff who work on a technical assistance project in a given country for a specific year.

“Besides providing liquidity through IMF programs, the IMF also supports its member countries with so-called capacity development, which comprises both training of officials and technical assistance.”

The two key questions we are able to address with the above data are: First, does capacity building make it more likely that programs are successfully completed? And secondly, does capacity development further structural reforms? Using a fixed-effect panel regression we find that IMF training, measured as the fraction of public sector officials trained from a given country, leads to an increase in structural reforms but only through IMF programs and only when a significant share of public servants is trained.

Specifically, we find that domestic finance reforms, trade liberalization, and capital account liberalization are furthered when a substantial share of public sector workers had been trained prior to the occurrence of an IMF program. On the other hand, IMF technical assistance does not significantly lead to more structural reforms but raises the likelihood of completion of ongoing IMF programs. These results suggest that ongoing IMF capacity building activities increase the likelihood that a subsequent IMF program provides a window of opportunity for reforms in which IMF program conditionality and governments’ reform ownership reinforce each other.

These results are in line with some of the theoretical hypotheses one can put forward. IMF training might foster reforms through three main channels. First, training courses raise awareness of the newest developments in the academic and policy discussion, as well as of the best practices internationally. Second, IMF training also helps officials gain familiarity with the design of the so-called IMF macroeconomic framework that embodies the latest economic projections prepared by IMF staff for the purpose of Article IV consultations. Third, IMF training courses, if delivered to a large enough group of officials in a given country, might create a consensus that reforms are needed, especially in the context of an IMF program, which encourages reforms.

Given our empirical results and the theoretical discussion it might be worth considering increasing future training in possible program countries to yield the most impact. Also, training en masse seems to yield the most impact perhaps because training a critical mass of officials may help foster a collective culture of reforms. The issue of policy ownership is central to the debate on how to raise the effectiveness of IMF programs (see Drazen, 2002 and Boughton and Mourmouras, 2002). IMF programs are often subject to the perception that they lack government policy ownership. Thus they may not have the expected long-lasting impact. We argue that capacity building and training in particular may help alleviate such policy ownership “deficits.” In other words, IMF training provides a key tool to reconcile conditionality associated with IMF programs with higher policy ownership. By raising awareness of relevant economic policies and sharing state of the art knowledge, capacity building can help facilitate reforms especially when a window of opportunity opens through, for instance, an IMF program. 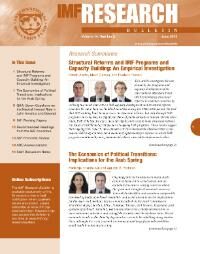 Number of officials trained per region and year 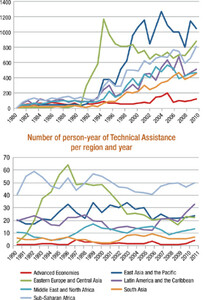