The Research Summaries in the March 2013 Research Bulletin discuss "Trade Finance and Its Role in the Great Trade Collapse" (JaeBin Ahn) and "Sovereign Debt: How to Track Who Is Buying and Selling It" (Serkan Arslanalp and Takahiro Tsuda). The Q&A looks at "Seven Questions on the Implications of Global Supply Chains for Real Effective Exchange Rates" (Rudolfs Bems). Readers can also find in this issue a listing of recent IMF Working Papers, Staff Discussion Notes, and Recommended Readings from IMF Publications. The Bulletin also includes a call for papers for a research conference and information on free access to the IMF Economic Review in April.

The Research Summaries in the March 2013 Research Bulletin discuss "Trade Finance and Its Role in the Great Trade Collapse" (JaeBin Ahn) and "Sovereign Debt: How to Track Who Is Buying and Selling It" (Serkan Arslanalp and Takahiro Tsuda). The Q&A looks at "Seven Questions on the Implications of Global Supply Chains for Real Effective Exchange Rates" (Rudolfs Bems). Readers can also find in this issue a listing of recent IMF Working Papers, Staff Discussion Notes, and Recommended Readings from IMF Publications. The Bulletin also includes a call for papers for a research conference and information on free access to the IMF Economic Review in April.

The Great Recession stimulated research on many issues that had been overlooked previously in the profession. Trade finance is one of the best examples of these issues. Although trade finance has served as the primary driver of international transactions for centuries, it received its due attention from academic researchers and policymakers only after the Great Recession that was accompanied by what has been called the Great Trade Collapse. This article summarizes recent research on trade finance, particularly the pattern of payment methods and the role of trade finance in the Great Trade Collapse.

At the onset of the Great Recession, triggered by the bankruptcy of Lehman Brothers, international trade fell much faster and more drastically than GDP worldwide, resulting in what has been labeled the Great Trade Collapse. Since then, researchers have found that the inherent nature of international trade—sectoral composition, vertical linkages, lumpiness, and trade finance—can lead to larger drops in trade during downturns. This article will focus exclusively on trade finance.1

There is no lack of evidence when it comes to the important role of financing in international trade. Berman and Martin (2012) show that African exports were particularly vulnerable to past financial crises in destination countries mainly due to disruptions in trade finance. Chor and Manova (2012) find that U.S. imports from countries with tighter credit markets fell more during the Great Trade Collapse period, and that the decline was more pronounced in external-finance-intensive industries. During the same period, a firm-level analysis also confirms that exporters hit harder by credit supply shocks reduced exports significantly more (Amiti and Weinstein, 2011; Paravisini and others, 2011). In fact, given the substantial role of financing in every modern economic activity, it is hardly surprising that the recent financial crisis had adverse effects on international trade. A more relevant question is why international trade was disproportionately hit relative to domestic activity, which in turn begs the question, what is trade finance?

Every business transaction involves trade finance. For example, when a seller receives a purchase order from a buyer that stipulates the payment from the buyer after delivery (i.e., a post-shipment payment or open-account transaction), the seller extends trade credit to the buyer and becomes responsible for working-capital financing to produce the goods and fulfill the order. Alternatively, the buyer can take up the responsibility of trade financing when a letter of credit is issued by the buyer’s bank or the buyer makes advance payment. Such trade financing will be more acute for international transactions because the typical shipping time is longer (Ahn, Amiti, and Weinstein, 2011; Berman and others, 2012) and the risk of nonpayment or nondelivery is higher (Ahn, 2011; Antras and Foley, 2011; Schmidt-Eisenlohr, 2010).

In particular, Ahn (2011) develops a model that predicts the pattern of payment methods and explains the role of trade finance in the Great Trade Collapse in terms of the level of information accumulated between trading partners. Higher trade costs lead to fewer cross-border transactions, resulting in less information on foreign trading partners, and hence riskier international transactions. Information becomes more important in uncertain times, which explains why international trade finance loans are more sensitive to a financial crisis. The underlying premise is that the level of information affects the cost of trade financing and plays a crucial role in determining the choice of payment methods and the value of transactions.

In order to test the empirical validity of such financing motives in the choice of payment methods, it is critical to consider the characteristics of both the buyer and the seller involved in the transaction, including their bilateral relationship. This requires buyer-seller matched transaction data with payment method information. However, the lack of available data at such a detailed transaction level makes this a somewhat elusive quest.2

Ahn (2012a) tackles the hurdle by employing the universe of Colombian import data over the 2008–11 period, encompassing well over 2 million transactions a year. The unique features of this dataset—which identify the entities of each foreign supplier and Colombian importer in addition to the payment method used in each transaction—are almost ideal. Moreover, the fact that the majority of Colombian importers transact with multiple foreign suppliers enhances the quality of econometric analysis because it allows for exploiting within-importer variations, effectively controlling for importer-level characteristics such as nonpayment risks.

Controlling for goods and importer fixed effects, the baseline specification shows that the post-shipment payment term is more likely to be chosen if (1) a foreign supplier is larger (proxied by the volume of total exports to Colombia), and (2) a foreign supplier has transacted with the Colombian importer previously, although the effect of such a transaction history is weakened for larger suppliers. To the extent that supplier size reflects the supplier’s financing ability and past transaction history reflects the buyer’s creditworthiness, this finding implies that financially healthier suppliers are better able to extend trade credits to buyers, whereas less liquid suppliers have to rely on advance payments or letters of credit. For a given importer, better-informed suppliers are more willing to extend trade credits. Furthermore, the interaction term suggests that illiquid suppliers are more concerned about buyers’ creditworthiness. Most interestingly, when an intra-firm transaction dummy variable is added with interaction terms, each of these effects disappears for intra-firm transactions, which are relatively free from credit risks. In addition, country-level variations reveal that a supplier in a country with poorer information on Colombian importers (e.g., more distant, non-Spanish speaking, and less trade with Colombia), or in a financially less-developed country (e.g., lower level of bank credits to GDP), is less likely to offer post-shipment payment terms to a Colombian importer. Overall, the evidence strongly confirms that the choice of payment methods hinges on suppliers’ ability and willingness to extend trade credit in the face of buyers’ nonpayment risks.

The next step is to verify the model’s prediction on the trade collapse. Trade finance becomes costlier and less available during financial crises. According to Ahn (2011), such adverse shocks will be more severe for transactions between lesser-known trading partners, particularly when a transaction takes place under the post-shipment payment term. Again, the richness of the data allows for controlling for importers’ goods-level demand shocks and for exploiting transaction-level variations for each payment type. The simplest and most direct evidence comes from the fact that inter-firm transactions dropped, on average, by 10 percentage points more than intra-firm transactions. A deeper look at the data confirms that imports from a supplier who has better information on the buyer (e.g., having imported from the buyer in the past) or who resides in a country with better information on Colombian importers, declined less.

Another piece of evidence is found by Ahn (2013b), who explores variations in letter of credit transactions for each importer-exporter pair across issuing banks using the same dataset. Controlling for importer-exporter specific demand shocks, the estimation results show that a bank with bigger adverse liquidity shocks reduced letter of credit supply substantially more, which was then directly passed on to a reduction in imports. Calculations from the estimation results suggest that the trade finance channel can explain at least 38 percent to 47 percent of the collapse in imports by letters of credit in Colombia.

Trade finance undoubtedly played a role in the Great Trade Collapse. Adverse shocks from the global financial crisis on the supply and costs of trade finance seem to have been disproportionately bigger for international transactions due to informational disadvantage. The exclusive use of a letter of credit in international transactions amplified larger drops in trade. Point estimates suggest that such trade financing effects were economically significant even after controlling for adverse demand shocks.

It is reassuring, on the other hand, that international organizations including the World Trade Organization, International Monetary Fund, and World Bank were quick to recognize the drying up of trade finance as the main driver of the Great Trade Collapse. Their decisive action to put the issue on the agenda of the G-20 meeting in March 2009 helped boost trade finance by enhancing the supply of insurance and guarantees from export credit agencies, thus preventing further collapses in trade. In terms of trade finance, we have learned a priceless lesson from the Great Trade Collapse.

Interested readers are referred to Bems, Johnson, and Yi (2012) for a comprehensive survey of the literature on the Great Trade Collapse, and to Asmundson and others (2011) for survey-based evidence on trade finance. 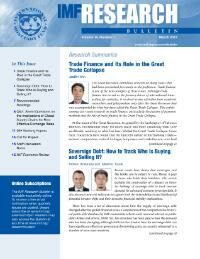