As the recovery from the financial crisis firms up, many country authorities will turn their focus from short-term stabilization policies to more structural policies to spur long-term potential growth. This leads to the following questions: Which reforms have the largest and most sustained growth impact? Does the sequencing of reforms matter? This article summarizes recent research on the link between structural reforms and growth, with a particular focus on a paper by Christiansen, Schindler, and Tressel (2009) that examines the joint growth effects of reforms.

As the recovery from the financial crisis firms up, many country authorities will turn their focus from short-term stabilization policies to more structural policies to spur long-term potential growth. This leads to the following questions: Which reforms have the largest and most sustained growth impact? Does the sequencing of reforms matter? This article summarizes recent research on the link between structural reforms and growth, with a particular focus on a paper by Christiansen, Schindler, and Tressel (2009) that examines the joint growth effects of reforms.

The global financial crisis has affected growth in countries of all income levels and has led to substantial output losses that in many cases could be permanent. Even output growth may for some countries remain below pre-crisis growth rates for an extended period of time. As policymakers start to exit from crisis policies, structural reforms will come back to the forefront of policy priorities with the purpose of supporting potential output growth and tackling factors that caused the crisis. The large existing and expanding literature that has examined the growth effects of structural reforms, the channels through which structural reforms may promote growth, and the optimal reform sequencing can provide guidance to policy makers on how to design such structural reforms.

Recently, substantial efforts have been put into collecting and creating new datasets of structural reforms in various policy areas. Examples include measures of financial reforms (Abiad and Mody, 2005; Tressel and Detragiache, 2008; Abiad, Detragiache, and Tressel, 2009), capital account reforms (Quinn, 1997; Schindler, 2009), and trade reforms (Sachs and Warner, 1995; Ostry, Prati, and Spilimbergo, 2009). These reform indicators capture a wide array of policy choices. For example, IMF domestic financial reform indicators document the timing of the liberalization of interest rates, the removal of restrictions on aggregate credit and credit allocation, competition policies in banking, reforms to improve the quality of bank supervision and regulation, and policies to liberalize and stimulate the development of securities markets. Other reform indicators focus on cross-border transactions. Examples include capital account reforms that relate to capital transactions of residents and nonresidents, and the use of multiple exchange rates.

The new datasets have provided valuable insights into reform efforts that were undertaken both across countries and over time. As countries reformed their economic systems, domestic financial, capital account, trade, and product market reform indicators have shown an increasing degree of liberalization in all regions and income groups. Low-income and developing countries have substantially reduced the gap with industrialized countries in terms of financial and product market liberalization (Ostry, Prati, and Spilimbergo, 2009).

These new datasets have provided the time and cross-country variation needed to identify the growth effects of domestic financial and capital account reforms. Domestic financial reforms have improved macroeconomic stability by leading to greater resilience to adverse terms of trade and interest rate shocks (Ostry, Prati, and Spilimbergo, 2009). They have also led to a deepening of domestic financial systems in many countries (Tressel and Detragiache, 2008)—a beneficial outcome considering that a higher initial level of financial development has been shown to be positively associated with economic growth (Levine, Loayza, and Beck, 2000; Aghion, Howitt, and Mayer-Foulkes, 2005). Moreover, financial liberalization may lead to a more efficient allocation of capital across firms and industries (Abiad, Oomes, and Ueda, 2008; Tressel, 2008). Capital account liberalization has widened the scope for financial globalization and increased cross-border capital flows (Binici, Hutchison, and Schindler, forthcoming). This has increased the potential for increased access to, and a more efficient allocation of, capital and foreign direct investment, but it has also allowed for more sudden capital fights. In addition, capital inflows may result in real exchange rate appreciation with potential adverse effects on growth, and liberalization of capital account restrictions on residents may have different growth effects than those from removing restrictions on nonresidents. At the same time, meeting institutional thresholds are likely important for reaping the positive effects from capital account liberalization (Dell’Ariccia and others, 2008).

While most studies have focused on examining the effect of one reform at a time, Christiansen, Schindler, and Tressel (2009) employ a large dataset that encompasses a long time series as well as a wide cross-country dimension to examine the joint growth effects of reforms.2 The study includes de jure indicators of financial, trade, and capital account reforms and finds that, among the three areas of reforms, the former is most robustly associated with significant growth effects, and these effects are significant mainly in middle-income countries. Specifically, transition countries have seen very significant growth effects of domestic financial liberalization, while trade reforms may be important for high-income countries. The paper does not find positive growth effects from capital account reforms, but shows that reversals of capital account reforms may deter growth.

Through which channels do reforms spur growth? Christiansen, Schindler, and Tressel (2009) also examine the association between liberalization and aggregate investment and total factor productivity (TFP) growth. In middle- and low-income countries, domestic financial liberalization leads to higher TFP growth, while positive effects on investment are less robust. Hence, the positive growth effects from domestic financial reforms occur through improvements in measured aggregate TFP growth. Furthermore, this finding is independent of the available volume of credit in the banking system; hence it is consistent with the hypothesis that financial reforms improve the allocation of credit.

Are the benefits from reforms permanent? To assess whether there are lasting effects of reforms, Christiansen, Schindler, and Tressel (2009) define reform episodes as periods in which there is a positive change in the reform indicator and identify nonlinear effects of reforms by examining the effects of large reforms, defined as an increase in the liberalization variable of more than one standard deviation of the change in the liberalization index. The results point to higher growth for up to six years but insignificant effects at longer horizons. For middle-income countries, domestic financial reforms increase growth by an average 1.2 to 1.4 percentage points at the three- to six-year horizon, but have only level effects in the long run. In addition, positive growth effects from large financial reforms suggest the presence of nonlinearities in the effects of reforms. Although trade reforms are found to have significant and positive effects on growth, lasting up to six years, significant coefficients on the lead of trade reforms—that is, increased growth taking place before trade reforms are initiated—suggest that the positive coefficients on trade reforms may be in part the result of either reverse causality or anticipatory effects. For example, the knowledge that implementation of a large reform will occur may attract investors and thereby lead to stronger growth even before the reform is implemented. Indeed, the paper finds that trade reforms are preceded by faster TFP growth and investment.

Does the sequencing of reforms matter? The sequencing of reforms can be very important for reaping their full benefits, and the institutional environment in particular—including political institutions and the protection of property rights—is likely to influence the effectiveness of economic reforms. Correspondingly, Christiansen, Schindler, and Tressel (2009) find that well-developed property rights are important for reaping the benefits of structural reforms. Specifically, countries with well-developed property rights tend to have positive growth effects of financial and trade reforms at a six-year horizon, while this is not the case for countries with poorly developed property rights. Such complementarity of reforms can help explain the heterogeneity of growth effects of financial and trade reforms among developing countries.

In sum, the existing literature suggests that reforms can have positive growth effects. While the work of Christiansen, Schindler, and Tressel (2009) confirms this, it also suggests that to fully understand and identify the effects of structural reforms, it is necessary to explore the joint effects of reforms in various areas as well as their sequencing. In addition, the finding that the positive effects of reforms are mainly driven by middle-income countries points to the need for further work exploring potential differential effects of various reforms among different income groups.

The author thanks Martin Schindler and Thierry Tressel for helpful comments on this summary article.

The work on structural reforms in Christiansen, Schindler, and Tressel (2009) was initiated as part of a project on growth and structural reforms in the IMF’s Research Department, guided by the late Alessandro Prati. The authors are indebted to him for his encouragement and numerous suggestions on the project. 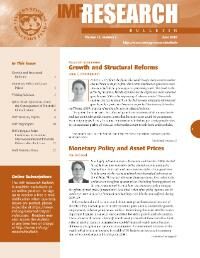