IMF research summaries on Latin America’s external linkages (by Shaun Roache) and on reaping the benefits of structural reforms (by Stephen Tokarick); regional study on the Eastern Caribbean Currency Union (by Paul Cashin and Evridiki Tsounta); listing of visiting scholars at the IMF during March–April 2008; listing of contents of Vol. 55 No. 2 of IMF Staff Papers; listing of recent IMF Working Papers; listing of recent external publications by IMF staff; and a call for papers for the Jacques Polak Ninth Annual Research Conference.

IMF research summaries on Latin America’s external linkages (by Shaun Roache) and on reaping the benefits of structural reforms (by Stephen Tokarick); regional study on the Eastern Caribbean Currency Union (by Paul Cashin and Evridiki Tsounta); listing of visiting scholars at the IMF during March–April 2008; listing of contents of Vol. 55 No. 2 of IMF Staff Papers; listing of recent IMF Working Papers; listing of recent external publications by IMF staff; and a call for papers for the Jacques Polak Ninth Annual Research Conference.

IMF research has shown that structural reforms—the liberalization of product and factor markets—have many benefits. They raise growth rates and productivity, although it may take some time before these benefits are realized. Research has revealed that there may be complementarities among certain types of reforms that reinforce the impact of one on the other. Overall, structural reforms are an important component of a policy package that countries can implement to raise per-capita real GDP.

How can countries accelerate their rate of economic growth? Policymakers the world over frequently grapple with this question. And while there is no magic formula, it is fair to say that a consensus has emerged that any economic program designed to spur growth must include structural reforms—policies that liberalize financial, product, and factor markets (e.g., labor markets) and reduce barriers to international trade. Structural reforms typically are an important component of IMF-supported adjustment programs, but just how effective are they? A large body of research undertaken at the IMF suggests that they are essential if countries are to grow more rapidly.

IMF research points to the general conclusion that structural reforms are beneficial to the country undertaking them, although these benefits may take some time before they materialize. Tressel (2008) examined the effects of financial and trade reforms on the performance of manufacturing output across a number of countries. He found that financial sector reforms had two important effects: (1) they improved the efficiency of financial intermediation by reallocating capital across sectors; and (2) they enhanced the resilience of economies to shocks. Trade reforms resulted in faster output growth in export sectors, especially those that used imported intermediate inputs to a large extent. Campos and Kinoshita (2008) reported robust evidence of a positive relationship between reforms, especially financial sector liberalization and privatization, and the ability of a country to attract foreign direct investment.

In a survey paper, the IMF (2004) concluded that structural policies in the context of Fund-supported programs—at least those designed to assist in fiscal adjustment and enhancing output growth—have been effective. Research has revealed that the benefits of structural reforms do not occur immediately, however. For example, Salgado (2002) investigated the impact of structural reforms on productivity growth in 20 countries in the Organization for Economic Cooperation and Development (OECD) and found that over the long run, the reforms—particularly product market and trade reforms—had a significantly positive effect on productivity growth. In the short run, however, the impact of the reforms was weak or even negative, suggesting that the existence of adjustment costs precluded a full realization of the benefits until some time had elapsed.

Owing to data availability, a large body of IMF research has focused on the impact of structural reforms in the advanced economies of Europe. These studies all reach a similar conclusion: these economies would benefit, in terms of enhanced growth prospects, if they would undertake structural reforms to make their labor and product markets more resilient. Everaert and Schule (2008) used the IMF’s Global Economy Model to show that the European Union would enjoy sizable output and employment gains in the long run if it were to boost competition in product and labor markets.

One area that has received quite a lot of attention has been the impact of labor market reforms in Europe. Estevão (2005) observed that real wage growth in the European Union has moderated significantly over the past 20 years, but that there has not been much of a reduction in the unemployment rate in the region. He found that the positive impact of wage moderation was offset in large part by the high degree of product market regulation and the existence of barriers to firm entry. Under these conditions, the effects of wage moderation on output and employment growth were substantially muted. With rigidities in product markets in place, the wage reductions showed up as larger industry profits and rents. Boeri (2005) also emphasized the beneficial effects of reform to both labor and product markets. Berger and Danninger (2007) studied a sample of OECD countries and concluded that labor and product market reforms would raise aggregate employment significantly. The authors highlighted that their results come about in large part as a result of interaction effects between the two types of reforms.

Recent IMF research has also evaluated a specific type of labor market reform for Europe. Zhou (2006) studied a type of reform to employment protection legislation that relaxed restrictions on hiring and firing temporary workers, while leaving those on permanent employees unchanged. She concluded that the impact of this type of partial reform depends on the particular labor market, but that it raises the unemployment rate in the specific case of France.

IMF research has also evaluated the impact of structural reforms across a range of emerging market economies. Enders (2007) undertook a careful case study in order to understand the reasons behind the acceleration in growth in Egypt in recent years. Using the “decision tree” approach of Hausmann, Rodrik, and Velasco (forthcoming), Enders concluded that the principal constraints on growth in Egypt were due to complex regulations facing entrepreneurs and the inefficient delivery of government services. He reported that the reforms adopted by the Egyptian authorities in 2004 designed to reduce regulations have had a positive effect on economic growth. Similarly, Gemayel and Grigorian (2005) have shown that Uzbekistan would benefit from a wide-ranging set of structural reforms. For India, Topalova (2004) has uncovered evidence that trade liberalization raised the level and growth of firm productivity in the manufacturing sector. Khatri and Ogawa (2007) have shown that reforms by the Japanese government that reduced regulations in the service sector have been successful in raising productivity growth.

Adrogué, Cerisola, and Gelos (2006) studied the long-run growth performance of Brazil and concluded that macroeco-nomic stability, along with several structural reforms such as trade liberalization and improved financial sector intermediation, have helped increase per capita GDP growth since the mid-1980s. They did note, however, that some longstanding structural weaknesses, such as the high level of government consumption, continue to retard growth. In addition to its high level, the variability of government consumption may also affect growth outcomes. In this vein, Mody and Schindler (2006) found that a lack of fiscal discipline was at the heart of Argentina’s volatile growth history.

While structural reforms are not a magic bullet for curing all economic ills, IMF research demonstrates that they do have a key role to play in raising living standards across countries. As noted above, however, most of the research on the effects of structural reforms has been limited to advanced countries. The IMF continues to be actively engaged in this type of research1 and is compiling a new dataset on structural reforms in 91 countries for the period from 1973 to 2006, including many less-developed countries.2

For a summary of recent conference on this topic, see http://www.imf.org/external/pubs/ft/survey/so/2008/RES031708A.htm.

One subset of these data, a disaggregated dataset on capital account transactions, will be published in a forthcoming paper by Martin Schindler. 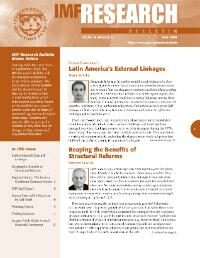