Foreign direct investment (FDI) has grown rapidly throughout the world in the last two decades, especially for developing countries, where it now accounts for almost half of total inflows (Kose and others, 2006). There is a strong presumption that FDI has a positive effect on economic growth and productivity through the transfer of technology and skills and by augmenting the recipient’s domestic capital stock.

The evidence from aggregate data on the positive effect of FDI on growth is rather mixed, however. In a cross-country study, Borensztein, Degregorio, and Lee (1998) find that FDI contributes to growth only in countries with a high level of human capital beyond a certain threshold. After controlling for schooling and other macroeconomic variables, Alfaro and others (2004) find that FDI has a significantly positive effect on growth when countries have well-developed financial markets. More recently, Kinoshita and Liu (2007) revisit the question in panel regressions. They find positive spillovers from FDI in countries with sufficient provision of infrastructure. Their finding is consistent with the consensus that in order to reap the benefits of FDI, it is crucial for the host country to raise absorptive capacity, as measured by either schooling, financial market development, or infrastructure (Mody, 2004).

FDI contributes to economic growth by augmenting capital accumulation. Mody and Murshid (2005) find evidence of a strong “crowding-in” effect of FDI on domestic investment in a panel of 60 developing countries between 1979 and 1999. The positive relationship between FDI and investment is reinforced by greater macroeconomic stability, low government deficits, and structural reforms.

The potential benefits of FDI are not limited to the industries that receive it. Recent studies using micro data emphasize the importance of inter-industry (vertical) linkages rather than intra-industry (horizontal) linkages as an avenue of positive spillovers. Javorcik (2004) finds that productivity spillovers in Lithuanian manufacturing firms result mostly from the backward linkages between multinational firms and their local suppliers of intermediate inputs. The sectoral composition of FDI also matters to the growth effect of FDI because positive externalities are realized through interactions between the sector receiving FDI and the rest of the economy. If FDI is limited to the primary sector, economy-wide productive spillovers are smaller than if FDI concentrates in the manufacturing sector. FDI in the resource sector tends to have less linkages to the domestic economy (Aykut and Sayek, 2007).

The recent literature on financial globalization finds that FDI, in addition to its growth effects, is the least volatile form of financial flows. Equity finance including FDI and equity portfolios is of a countercyclical nature (Prasad, Rajan, and Subramanian, 2007). Analyzing the behavior of various types of financial flows in instances of sudden stops, Levchenko and Mauro (2006) find that FDI remains strikingly stable and plays essentially no role at times of distress, suggesting that a greater share of FDI in foreign capital flows can offer better crisis protection by reducing vulnerability to financial shocks.

These characteristics motivate policymakers around the world to consider policies to attract FDI. Cross-country studies of the determinants of FDI often include lists of FDI “pull” factors or country-specific factors that explain its geographical distribution and magnitude. These determinants consist of the factors of comparative advantage such as market size, market growth, labor cost, resource abundance, and distance from the investing countries. Other set of determinants reflects host-country policies such as macroeconomic stability, sufficient availability of infrastructure, trade policy regime, taxation, and restrictions on capital flows.

Demekas and others (2005) estimate a gravity equation to explain average bilateral FDI flows to central and southeastern European countries. They find that, in addition to gravity factors, host country policies that affect relative unit labor costs, the corporate tax burden, infrastructure, and the trade regime also matter. They conclude that actual FDI flows in some countries in the region fall short of potential FDI, implying that they could attract more FDI if they improve their policies.

“Should countries seeking inward foreign direct investment promote it via tax and policy incentives? If so, what form should such incentives take?”

Trade policies and costs generally have a significant impact on FDI flows, depending on the final destination of sales by foreign firms. If the primary aim is to sell a finished product in the host-country market where foreign firms initially served via exporting, high trade protection (e.g., tariffs and nontariff barriers) should encourage firms to substitute affiliate production for exports and result in greater FDI. On the other hand, with the globalization of production processes, export-platform FDI intended for sales in the third market other than the host country has become increasingly common in developing countries. However, high trade barriers in developing countries discourage FDI flows in search of access to intermediate inputs. In an industry-level study in China, Amiti and Jarvorcki (2008) point out that vertical FDI of this type is more dominant at the provincial level and that access to customers and suppliers of intermediate inputs are the key determinants of FDI inflows.

Helpman (2006) provides a synthesis of recent developments in the new theory of FDI and trade in the globalization process. In this literature, the models of heterogeneous firms explain why and how they respond differently to globalization process, i.e., whether to export or to serve foreign markets via FDI. By introducing contractual frictions between buyers and sellers of intermediate inputs, the trade theory with within-industry heterogeneity can further account for the internalization decision of the firm, i.e., the choice of whether to source inputs via arm’s length trade (outsourcing) or via intrafirm trade (FDI). This enables us to explain the observed complex pattern of the integration of production processes across national borders beyond the traditional distinction between horizontal and vertical FDI. The prediction of the new theory of FDI with incomplete contracts is that institutional quality—such as the rule of law and corruption—matters to the firm’s decision to invest abroad as opposed to outsourcing (Antras, 2003; Antras and Helpman, 2004).

Institutional quality in the host country is an important determinant of FDI inflows. Wei (2000) shows that a variety of corruption indices are highly correlated with FDI. A recent study by Alfaro, Kalemli-Ozcan, and Volosovych (forthcoming) also argues that poor institutional quality is the main reason why capital does not flow from rich to poor countries. The authors construct a composite index of institutional quality from International Country Risk Guide variables and show that policies aimed at strengthening the protection of property rights and reducing corruption should help increase FDI as well as other types of capital flows.

Campos and Kinoshita (2008) find that structural reforms are another key determinant in explaining FDI flows into transition economies and Latin America countries. After controlling for institutional quality and other policy variables, they find that progress in financial sector liberalization is associated with greater FDI inflows into these countries. Their finding is consistent with the importance of vertical linkages and a well-developed financial market as a precondition for greater efficiency of local suppliers and customers, though multinational firms themselves are not financially constrained.

Should countries seeking inward FDI promote it via tax and policy incentives? If so, what form should such incentives take? In reality, many countries engage in some form of FDI policy. Preferred tools range from offering tax breaks to imposing requirements on foreign investors such as export targets and training of domestic workers. The evidence on the effects of taxes on FDI to date is unsettled. Using data on U.S. multinationals, Wheeler and Mody (1992) find that differences in corporate tax rates were not relevant for location decisions by foreign investors in the manufacturing sector, although they are more important for the export-oriented industry. De Mooij and Ederveen (2003) provide a comprehensive literature survey of the effect of corporate tax rates on FDI. As they point out, the implications of tax rates vary with the nature of FDI, measurement of FDI activity, and tax treatment in the host and home countries. As multinationals potentially face taxes in the host and home countries, it is also important to take into account policies to address double taxation that could significantly alter the effects of taxes on FDI location decisions.

The establishment of export processing zones (EPZs) has become a common way for developing countries to attract FDI. In the EPZs, tariffs and quotas are eliminated and bureaucratic requirements are lowered in hopes of bringing in new business and foreign investment. In particular, EPZs provide for imports of intermediate goods used in the production of exports on a duty-free basis. Consequently, most EPZs concentrate on the production of textiles, clothing, and electronics for the mass market. EPZs generally contribute to an increase in manufactured exports. However, the net benefits of FDI on the domestic economy are not always positive because the FDI depends on the backward and forward linkages between EPZs and the domestic economy.

In the aftermath of the capital account crises, capital controls on volatile short-term flows is another policy being used to promote more stable long-term flows. Elo (2007) cautions, however, against jumping to the conclusion that this policy achieves what it is intended to do. She finds that, although capital controls to restrict short-term volatile financial flows may seem to help shift the composition of financial flows more toward more stable and long-term FDI flows at a glance, capital controls also reduce the quality of FDI in terms of volatility and volume by increasing country risk.

“Informality and Regulations: What Drives the Growth of Firms?”

For information on ordering and pricing, please point your browser to www.palgrave-journals:.com/imfsp. To read articles in this and other issues of IMF Staff Papers and the data underlying them on the Web, please see http://www.imf.org/staffpapers. 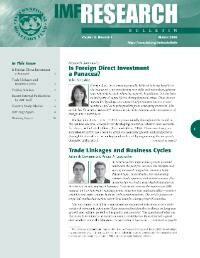