The German economy is emerging from a decade-long adjustment process marked by high unemployment, rising fiscal deficits, and a bifurcation between a languishing domestic economy and an increasingly competitive external sector. This drawn-out and painful process owes much to the costs associated with reunification in the early 1990s and the rigidities in various sectors of the economy that prevented a more rapid correction. IMF staff analysis has highlighted the roles of structural impediments in labor, product, and financial markets, and examined their repercussions for public finances and long-term sustainability in conjunction with pressures from population aging.

Germany’s protracted, external-demand-led recovery since 2000 is symptomatic of the country’s difficulties in adjusting to shocks. Odenius (2006b) takes stock of a number of possible explanations for an altered connection between exports and domestic demand. Since the early 1990s, Germany experienced a series of shocks: a wage blowout following unification, intensified competition from regional and global markets, and public sector adjustment to prepare for emerging costs of the country’s aging population. This paper argues that a combination of factors—importantly rigidities in services and labor markets, and the need for fiscal adjustment—restrained domestic demand and employment growth, and led to protracted wage moderation. As a result, the traditional spillover from external demand to domestic activity took longer to occur than in previous cycles.

Sluggish growth is partly the result of inflexible labor markets. Analyzing wage regressions derived from a micro-panel dataset, Prasad (2004) shows that the German wage structure has been remarkably stable between and within skill groups despite important shifts in labor supply and demand. He attributes this rigidity to institutional factors and concludes that in the absence of relative price flexibility, labor markets have no alternative but to adjust by shedding labor. Economy-wide wage moderation, which was successful in creating employment in other countries coming into the 1990s, was undercut by the rapid wage convergence in the former East Germany following unification (Decressin and others, 2001). Productivity-adjusted labor costs declined gradually but from a high level, so that restoring price competitiveness required more time than in other countries.

Regulatory barriers also held back the domestic economy and employment. Berger and Danninger (2006b) argue that regulatory reforms lagged in key growth areas. Licensing requirements and entry barriers in services markets and crafts favor incumbents and stifle productivity growth. In labor markets, employment protection legislation for full-time jobs remains among the strictest in the European Union (EU), although there has been some liberalization for temporary employment. Berger and Danninger (2006a) estimate that joint deregulation of labor and product markets could boost employment growth by up to 1 percentage point a year. Their findings also point to sizable benefits from coordinating structural reforms.

Germany’s financial sector lacks dynamism and records lower productivity growth than in some comparator countries. German banks are less profitable, and the banking system is more fragmented, than in most European countries (Brunner and others, 2004). The performance of private banks lags that of their international peers, possibly owing to inadequate risk pricing and their insufficient involvement in high-value-added activities. The credit slowdown beginning in the late 1990s is therefore not only the result of low credit demand. Čihák (2006) presents evidence of a partial credit crunch exacerbated by regulatory barriers. He concludes that a greater degree of market-based restructuring and consolidation are needed to achieve more dynamism in the banking sector. Public sector ownership is still significant, and regional public banks (Landesbanken) have underperformed comparable banks. Čihák and Traa (2006) estimate that the opportunity cost of investing public capital in these banks was one-quarter of 1 percent of GDP annually since the early 1990s.

Political economy processes in Germany appear to be one reason why reforms have been implemented slowly. As Braumann and Decressin (2004) show, the consensus approach of the German political system influences the type and degree of reform. A political trade-off between structural and fiscal reform appears to prevent the implementation of broad-based and simultaneous reforms. Regression analysis of indicators of fiscal and structural reform shows that German governments with smaller majorities in the legislature pursued fewer fiscal and more structural reforms while the opposite was true of governments with larger majorities. Using a game-theoretic model for structural reform, Berger and Danninger (2006a) argue that a partial perspective of policymakers—who are focusing on either labor or product markets, rather than adoping a joint approach—may lead to suboptimal outcomes, because benefits from reform complementarities are not internalized.

With rather slow, policy-led adjustment, the parts of the private sector most exposed to competition—the tradables sectors—responded and moved ahead on their own with strong cost cutting, including through offshoring of production activities. Odenius (2006a) shows that cost cutting has been a major avenue toward the achievement of adjustment and improved corporate profitability, while use of other avenues, such as increasing productivity and revenue growth domestically, was restricted by barriers to competition in the domestic sector. Danninger and Joutz (2007) explore adjustment in the export sector and examine how Germany, in these circumstances, was able to improve its export market share since 2000 relative to other industrial countries. By estimating an error-correction model for exports, they show that exporters not only benefited from long-standing trade relationships with fast-growing partners but also engaged in cost cutting by importing intermediate inputs and shifting labor-intensive production abroad.

In the public sector, fiscal adjustment was hampered by headwinds from slow growth. Braumann (2006a) decomposes the fiscal deficit into a policy and an economic component. His analysis shows that the structural weakening of the economic component was caused by erosion of Germany’s main tax bases—wage income and household consumption—which complicated the government’s substantial adjustment effort.

From a longer-term perspective, Germany’s economic outlook is affected by declining labor input (hours worked), which is lowering potential growth at a faster rate than anticipated. Braumann (2006b) computes potential growth using a production-function approach and estimates it to be around 1.4 percent in this decade. Population aging will exert further pressures beginning in 2010 and is expected to slow down the annual growth potential to 1.0 percent over the following decade. Government policies aimed at improving labor utilization or increased productivity growth could help ease this constraint, but would still leave a challenging growth environment for policymaking.

In recent years, the German government has decisively reduced expenditure pressures exerted on public finances by the country’s aging population that appear to have slowed growth as households have stepped up their own precautionary saving. Traa (2006) presents a first public sector balance sheet for Germany and tracks the impact of recent reforms on public sector net worth. Estimated public sector net worth is highly negative but has improved in recent years as pension, health, and welfare reforms have lowered future fiscal liabilities related to aging. In IMF (2006), these estimates were refined and show that the Grand Coalition’s adjustment program from 2005 onward has further strengthened the public sector’s net worth. Using the IMF’s Global Fiscal Model, Botman and Danninger (2006) show that achieving structural balance by 2010 would significantly improve the public debt dynamics—thereby strengthening confidence in the sustainability of the welfare state and the economic recovery. Long-term estimates on spending trajectories remain uncertain, however, and hence the adjustment requirement needs to be monitored continuously. 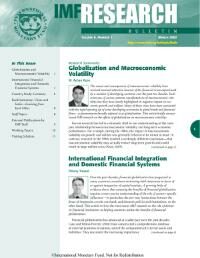