Price indices serve as measures of inflation, deflators for national accounts aggregates, and the basis for escalation payments. Good economic analysis requires a proper understanding of deficiencies in the practice of compiling these measures. Research by IMF economists has contributed to our understanding of what is good practice and to the price index manuals (ILO and others, 2004a and 2004b). These manuals set out internationally accepted standards for measuring inflation that are promulgated in the IMF Statistics Department’s training, technical assistance, and report on standards and codes (ROSC) data missions.

Sources of bias in consumer price indices (CPIs) are well researched. Most recently, IMF staff economists have focused on the accounting for changes in product quality and on the aggregation formula—areas found by Boskin and others (1996) to be the most important sources of bias in the U.S. CPI.

A first issue of CPI measurement is the accounting for changes in product quality. National statistical offices measure price changes using the matched-models method. The offices collect details and prices of a representative selection of items in a price reference period and collect their matched prices in successive periods, to compare the prices of like with like. But a potential quality adjustment bias arises when old models are replaced by new models of different quality.

Barcode-scanner data from retail outlets provide an alternative source of data to measure price movements for comparison with CPI indices. Such data include details on the quality of the models of items sold and allow researchers to measure price changes that properly adjust, using hedonic regressions, for quality changes. Silver and Heravi (2001, 2003, 2004) provide detailed studies on the quality-adjusted price movements of consumer durables across time. Heravi, Heston, and Silver (2003) and Silver and Heravi (2005a) focus on parity estimates across countries. These studies demonstrate the results from the use of alternative formulas and, as a result, provide estimates of substitution bias.

A particular problem with the matched-models method arises if there is a rapid turnover in differentiated models, as typically occurs for products such as personal computers (PCs). The sample of models used to measure price changes becomes unrepresentative when, for example, new models are introduced (but not included in the sample) and old models are retired (and dropped out of the sample). Scanner data have information on the universe of transactions and are thus ideal for identifying any selectivity bias owing to matching. Silver and Heravi (2005b) developed a hedonic analytical model for identifying and estimating such bias and, for consumer durables, found that price indices for matched quality-adjusted prices fell faster than price indices for the universe of transactions. Silver (2003) argues that the conceptual basis for a CPI in a dynamic market environment must be a cost-of-living index (COLI), as opposed to a cost-of-goods index (COGI).

The two principal methods for dealing with product groups with a high turnover of differentiated models are the hedonic imputation indices and the dummy time hedonic indices. Both methods not only correct price changes for changes in the quality of items purchased but also allow the indices to incorporate matched and unmatched models. They can yield quite different results, however. Silver and Heravi (2006a) derived an expression for the difference between the two methods, which enables national offices to consider the factors governing, and implications for, the choice of method. Further, many methods to operationalize such hedonic indices exist, including the period(s) of weights used, arithmetic or geometric aggregator, and chained or fixed base. Silver and Heravi (2006b) examine and discuss the results of 36 such methods for consumer durables, finding that the choice of method matters.

A second issue for CPI measurement is the choice of aggregation formulas. National statistical office staff compile CPIs at two main levels. At the lower level, elementary aggregation formulas use unweighted averages of prices and are typically applied to prices of finely defined goods, such as varieties of apples, sampled from outlets. Such finely defined goods are the building blocks of a CPI (Silver and Webb, 2002). At the higher level, the resulting elementary indices are weighted by (base-period) expenditure shares.

The two principal formulas used to calculate elementary indices are the unweighted ratio of arithmetic means (Dutot) and geometric means (Jevons). The differences between the formulas can be shown to be related to changes in the variance of prices, which, itself, has welfare implications—see Silver and Ioannidis (2001). Silver and Heravi (2006c) provide an improved analytical framework, based on sample estimators, to establish the difference between the Dutot and Jevons indices. The difference between the two formulas is decomposed into a difference owing to product heterogeneity and a difference owing to essentially different types of averages in the index formula. Silver and Heravi show the choice between the Jevons index and a heterogeneity-corrected Dutot index to depend on sampling/estimation considerations and expected elasticities. In their empirical example, they find that about half the difference between the formulas is due to product heterogene-ity—an important consideration, given that the Dutot index is biased if applied to heterogeneous items.

At the higher level of aggregation, national office staff apply expenditure-share weights to elementary price indices. CPIs can be fixed base or chain weighted, and Shelley Winston (2006) shows how high-frequency chaining applied to seasonal goods can lead to significant bias. A Laspeyres index requires the weights and price reference period to be the same. Yet, in practice, it takes time for statistical office staff to compile expenditure data from the household budget survey to use in compiling the index. The Consumer Price Index Manual (ILO and others, 2004b), hereinafter referred to as the CPI Manual, advises updating the out-of-date weights by the price change between the weight and price reference periods. Ruiz-Castillo, Ley, and Izquierdo (2002a) show, using Spanish CPI data, that following the practice of not price-updating weights can considerably understate an appropriate cost-of-living index. They further show that much of the bias from this practice can be explained by the gap between plutocratic and democratic CPIs—a related area of their research.

Invariably CPIs are plutocratic—that is, the weights for each household’s price changes are their relative expenditure shares, in contrast to an equally weighted democratic CPI. Analysts of the plutocratic-democratic (P-D) CPI gap have considered who suffers the most from the use of a plutocratic CPI for escalation payments—the rich or the poor? Izquierdo, Ley, and Ruiz-Castillo (2003) and Ley (2005) found, using Spanish CPI data, that plutocratic inflation has, on average over time, been anti-rich. The extent of this effect varied significantly, however, according to the time period selected. In a few of the periods studied, the reverse was true—plutocratic inflation was anti-poor. Ley (2005) stressed the difficulties involved in generalizing findings across countries and even within countries over time. He also provided a formal decomposition of the P-D CPI gap (see also Ley, 2002). Ruiz-Castillo, Ley, and Izquierdo (2002b) applied estimates of U.S. quality-change bias (QCB) to Spanish CPI data. They showed how some of the P-D CPI gap could be explained because the QCB was more pronounced for richer households. Izquierdo, Ley, and Ruiz-Castillo (2003) show that much of the P-D CPI gap could simply be explained by the different price changes for goods and services classified as “luxuries” and “necessities.”

The CPI, Producer Price Index (PPI), and (draft) Export and Import Price Index (XMPI) Manuals have been essential to developing and implementing international standards on price index numbers. Erwin Diewert’s contribution to the CPI and PPI Manuals was recognized by his receipt in Canada of the Purvis Award, 2005 and in the United States of the Julius Shiskin Award, 2005. IMF staff economists—notably Paul Armknecht (editor of the PPI Manual), Mick Silver, and Kim Zieschang—also contributed chapters to the manuals. They drew on papers by, among others, Armknecht and Maitland-Smith (1999) on seasonal goods, Zieschang (2000) on integrating price indices into the 1993 System of National Accounts (1993 SNA), and Dridi and Zieschang (2004) on the theory and practice of import and export price indices. These latter two papers clearly show how the 1993 SNA analytical framework and economic theory provide guidance on practical measurement issues.

Research by IMF economists should continue to contribute to our understanding of what is good practice, while the manuals and work of the IMF’s Statistics Department should contribute to its implementation. 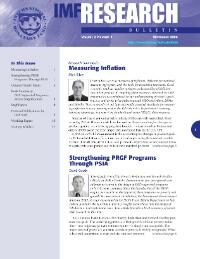