The Sixth Jacques Polak Annual Research Conference, held on November 3–4, 2005 at the headquarters of the International Monetary Fund in Washington, marked a departure from the forum’s usual focus on macroeconomic issues. Yet, as IMF Deputy Managing Director Agustín Carstens said in his opening remarks, “understanding reforms, what makes them happen, and their consequences is no less central to the daily work of the IMF than understanding the macroeconomics of stabilization.”

Among the questions posed by the conference was, if reforms are good for society, why is it so difficult to make them happen? According to Ernesto Dal Bó of the University of California at Berkeley and Pedro Dal Bó of Brown University, a possible explanation is that the standard view of the economy does not take into account social conflict and its interaction with reforms. These authors take the traditional 2 x 2 small model of international trade and add a third sector—social conflict—that destroys resources rather than uses them to produce new output. If conflict is a relatively labor-intensive activity, reforms enhancing the productivity of the capital-intensive sector, which in general would make a country better off, may hurt the country, because they result in more conflict. This may explain why politicians are reluctant to undertake apparently beneficial reforms.

That the IMF can play a role in spurring reform efforts is well recognized. The Fund’s Anna Ivanova discussed how this can happen using outcome-based conditionality in IMF-supported programs. With outcome-based conditionality, IMF financing is conditional on the member country meeting particular targets or objectives rather than implementing specific actions. This type of conditionality may be more practical for inducing countries to undertake complex reforms without jeopardizing ownership. While the literature on the effectiveness of conditionality has generally found only marginal effects, Bennet Zelner (University of California at Berkeley) presented evidence that countries with IMF loans are more likely to undertake market-oriented reforms. Zelner’s paper was coauthored by Mauro Guillén and Witold Henisz of the University of Pennsylvania.

How Reforms Can Run Aground

Sanjay Jain (University of Virginia) and Sharun Mukand (Tufts University) proposed a model in which some groups benefit and others lose from reforms, but losers can vote to have some of the gains redistributed to them. As reforms progress, however, the ranks of the losers shrink, and at some point, they may lose the political power to force redistribution in their favor. Anticipating this outcome, and unable to know for sure if they will be among the winners in the next stage of reform, losers may choose to block further reforms so that they can enjoy the fruits of the initial reform through redistribution.

Reform may also run aground because the public fears that elites will appropriate all of the gains. In this case, politicians can use the constitution as a commitment mechanism to boost support for economic reform, as illustrated in a paper by Anders Olofsgård and Raj Desai of Georgetown University. To support their view, they showed opinion poll data indicating greater support for reforms in countries with greater political accountability and judicial independence.

Andrei Levchenko of the IMF and Quy-Toan Do of the World Bank studied the effect of trade opening on institutional quality. In their theoretical model, bad institutions translate into high operating costs for firms and trade liberalization benefits mostly large firms, while small firms are forced to exit. Politically influential large firms may prefer higher fixed costs to prevent new entry and reduce competition. Thus, trade liberalization may worsen the quality of economic institutions.

In a careful empirical analysis of firm-level data from Colombia, John Haltiwanger (University of Maryland) and his coauthors also confirmed that trade liberalization leads to more forced exits by firms. However, this process leads to efficiency gains, as the companies that go out of business tend to be low-productivity firms. The joint paper was prepared with Marcella Eslava (Universidad de los Andes), Adriane Kugler (University of Houston and Universitat Pompeu Fabra), and Maurice Kugler (University of Southampton).

Another aspect of globalization is increased international financial flows. According to Pierre-Olivier Gourinchas (University of California at Berkeley) and Olivier Jeanne (Princeton University and IMF), the effects of financial globalization on reforms depend on investor confidence. If investors believe that the government will reform, they will keep their capital in the country, increasing wealth and making reforms more likely. But if investors do not believe that the government will implement reforms, they will take their capital abroad, impoverishing the country and making it optimal for the government not to implement any changes. This is a new model of self-fulfilling capital flight. The optimal policy in this case is to liberalize inflows but not outflows.

Impending disaster can spur even the most reluctant politician to action. So can crises force reform, particularly fiscal and monetary reforms that lower fiscal deficits and inflation. This is one of the key findings presented by Alberto Alesina, who delivered the Sixth Mundell-Fleming Lecture entitled “Who Adjusts? The Political Economy of Reforms.”

As a theoretical framework, Alesina described the war-of-attrition model. Different social groups fight over reforms by delaying a decision. Delay is costly, but caving in to the demands of the other group is even worse. While delays in reforms cost the society, it is rational for each group to wait, since the uncertainty about the cost of waiting for different groups is revealed as time passes. The winner of the game is the group with the lowest waiting cost. In this model, the passage of time alone increases the probability of reforms. A crisis can also generate reforms, especially if it makes one group worse off. By inducing reforms, then, a crisis can improve welfare. Political systems that allow more vetoes are less likely to generate early reforms, while external commitments accelerate the resolution of wars of attrition by increasing the cost of waiting.

In the empirical part of the lecture, Alesina showed that stronger governments—presidential systems and clear-majority parliamentary systems—stabilize more in time of crisis. On the other hand, he found little evidence that IMF conditionality generates a strong response, although this result is still tentative.

While the conference explored many aspects of the political economy of reforms, much remains to be studied, a point that came out during the proceedings. One important question preeminent for future consideration by policymakers was raised by IMF First Deputy Managing Director Anne Krueger: “While crises can spur reforms, what are the conditions that make countries reform so crises can be avoided?”

By Markus Rodlauer and Alfred Schipke

The Central American-Dominican Republic Free Trade Agreement (CAFTA-DR) with the United States will provide a new impetus for economic integration and bolster efforts by participating countries to compete successfully in the global economy. With a focus on the policy implications of increased integration, this Occasional Paper examines how policymakers can make the best of Central America’s considerable potential and set the isthmus on a path of rapid and sustainable growth.

The Central American nations already have made major strides over the past two decades in implementing social and economic reforms and consolidating democracy and macroeconomic stability. But poverty levels remain high, institutional weaknesses continue to undermine growth, and weak fiscal positions and financial sectors have left economies vulnerable to shocks.

The paper looks at these challenges and how Central America is attempting to meet them. The authors examine the macroeconomic implications of CAFTA-DR, fiscal sustainability, exchange rate regimes, financial sector issues, macroeconomic statistics, and the political economy of reforms. A core theme is the need to intensify regional collaboration in a number of areas to maximize the benefits of globalization. The study provides a framework for deepening cooperation in banking supervision and regulation, tax policy and administration, and economic statistics. It also notes that integration must be anchored in strong domestic economic policies, especially fiscal reforms to ensure sustainable public debt levels and structural reforms to raise productivity and competitiveness.

This study was issued as IMF Occasional Paper No. 243. 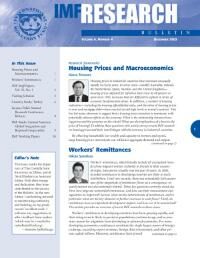