Thirty years ago, it was not uncommon to analyze economic developments within or across countries without much reference to international trade. That’s no longer the case. Globalization has prompted many countries to attach greater importance to the role of international trade in the process of economic development. World trade flows have grown faster than GDP over the last several decades, making it virtually impossible for individual countries to escape the consequences of world developments. This article selectively surveys recent IMF research on trade issues in three broad areas: (1) the effects of trade and trade policies; (2) the relationship between trade, growth, and inequality; and (3) the effects of trade liberalization in financial services.

Effects of Trade and Trade Policies

Does trade reform—often seen as a key component of structural reform—tend to improve welfare and growth? Does it also help the reforming country’s trading partners? A number of studies have demonstrated that trade barriers are quite costly to the countries that impose them. Wang (2001) investigated the impact of tariffs and nontariff barriers (NTBs) on imports of manufactured goods across 70 countries. He finds that a 1 percentage point increase in a tariff rate reduces imports by 2 percent, and that NTBs also significantly reduce imports. Tokarick (2003) used a general equilibrium trade model to show that the cost of support provided to farmers in Organization for Economic Cooperation and Development (OECD) countries is substantial. He finds that if all OECD countries removed support to their agricultural sectors—both tariffs and subsidies—world welfare would increase by about US$100 billion (in 1997 dollars), with about 92 percent of these gains going to the advanced countries themselves. Li (2003) finds that trade liberalization has an important impact on real exchange rates. Real exchange rates generally depreciate after a country opens to trade, although there is evidence to suggest that noncredible liberalizations lead to real-exchange-rate appreciations.

A number of studies have evaluated the progress in trade liberalization on a regional basis. For the Caribbean region, Egoume Bossogo and Mendis (2002) find that greater integration among countries in the Caribbean common market (CARICOM) has stimulated both intraregional trade and trade between CARICOM countries and those outside the region. For the Middle East and Africa, the picture is a bit different. Al-Attrash and Yousef (2000) find that there is considerable scope for expanding intra-Arab and Arab trade with the rest of the world, using a gravity model. Blavy (2001) reaches a similar conclusion regarding trade in the Mashreq region (Egypt, Jordan, Israel, Lebanon, and Syria). Subramanian and Tamirisa (2001) find that Africa, especially Francophone Africa, is underexploiting its trading opportunities, that is, trading less than would be predicted from a gravity-type model.

One way that advanced countries have often tried to spur development in poor countries is to grant trade preferences to these countries, often in the form of lower tariffs applied to their exports. Mattoo, Roy, and Subramanian (2002) examined how the African Growth and Opportunity Act (AGOA), which offers trade preferences to certain African exports to the U.S. market, would affect Africa. They concluded that the benefits to Africa could be large, but these benefits would be diminished by the onerous rules of origin that are part of AGOA.

All of the above studies examined the effects of trade policies in a static context. Recent contributions to trade theory have emphasized that changes in trade policies can lead to dynamic gains, through changes in productivity, technological change, and induced investment. Jonsson and Subramanian (2000) studied episodes of trade liberalization in South Africa since the early 1970s. They found evidence that trade liberalization contributed significantly to the growth process by raising total factor productivity (TFP).

Visiting Scholars at the IMF, January–March 2003

The relationship between greater openness to trade and rising income inequality, notably in advanced countries, has received a great deal of attention in recent years, partly because of the rapid increase in trade flows between industrial and many low-wage, developing countries in the 1980s and 1990s. Some researchers argue that the rapid rise in imports from low-wage countries has reduced the wages of unskilled workers relative to skilled workers in industrial countries. Tokarick (2002) decomposed the change in the skilled-unskilled wage gap in the United States between 1982 and 1996 into the portions that were attributable to changes in trade policy, factor supplies, and technology. Differences in the degree of skill-biased technical change across sectors is the main factor underlying the observed change in the wage gap in the United States; changes in trade policies had very little influence on the observed wage gap. When developments in a nontraded sector are considered, an expansion in trade, through a reduction in trade barriers, could narrow the wage gap. Bannister and Thugge (2001) study the link between trade reform and poverty and note that trade liberalization has an overall positive effect on the employment and income of the poor, but there may be winners and losers.

The relationship between trade, growth, and poverty has been the subject of heated debate in recent years. In a comprehensive survey of the literature, Berg and Krueger (2003) consider the effects of openness on both average income growth and the distribution of incomes for a given growth rate. The authors reach three conclusions: (1) a wealth of evidence supports that the principal cause of changes in absolute poverty is changes in average per capita income; (2) openness to trade is an important determinant of growth; and (3) growth associated with trade liberalization does not adversely affect the poor to any greater degree than growth in general does. Brunner (2003) argues that it is important to distinguish between the effects of trade openness on the level of income and on the growth rate of income. Using a panel data model, and instrumental variables to allow for trade and income being endogenous variables, he finds that a 1 percentage point change in trade is associated with a 1 percentage point change in average income, a finding that is significantly different from zero and robust to changes in alternative econometric specifications. Nonetheless, the estimated impact of trade on income growth is small and not robust to model specification. Rodrik, Subramanian, and Trebbi (2002) find that institutions are more important than trade or geography in influencing long-run levels of income, with the positive impact of trade felt through its role in improving institutional quality.

This study presents the IMF staff’s analysis of the causes, consequences, and risks of deflation. It develops a novel methodology for assessing and quantifying deflation risk and applies it to a wide range of industrial and emerging market economies. The following are the main findings: 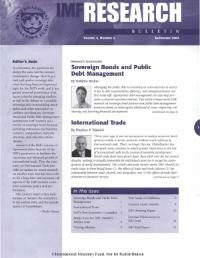