The policies that countries agree to follow as a condition for borrowing from the IMF—conditionality, for short—are at the heart of the IMF’s operations. Recent IMF research has focused on how conditionality, and the IMF’s process of interaction with borrowing countries, more generally, affect their commitment to implementing reforms. Theoretical research has stressed how strategic interactions between the IMF, borrowing governments, and other domestic actors that exert political influence have impacted ownership of reforms. Improvements in measuring conditionality have also made possible more rigorous empirical testing of the links between conditionality, the characteristics of borrowing countries, and the implementation and economic consequences of IMF-supported programs.

Country ownership of reforms is the idea that country authorities and other stakeholders will be primarily responsible for the design and implementation of reforms. How country ownership and conditionality are related is one of several important questions: Why is conditionality needed in IMF lending? How can conditionality become a better instrument of aid and development policy? IMF research has attempted to address these questions from different theoretical perspectives. Conditionality provides borrowing countries assurances that they will continue to receive IMF financing if they meet specified conditions, while also providing safeguards to the IMF that borrowers will repay their loans and adjust their policies in ways that are conducive to national and international prosperity.1

From the viewpoint of modern political theory, IMF influence on borrowing governments falls within a domestic political context, thereby providing a unifying framework for how to think about conditionality and its limits.2 Governments are motivated by self-interest as well as the objective of enhancing social welfare. Political incumbents will not pursue welfare-enhancing reforms advocated by the IMF if the cost, in terms of lost domestic political support, is high relative to the benefits. Domestic interest groups can influence authorities’ political cost-benefit calculus through advertising campaigns, contributions to political parties, bribes, and street protests.3 While conditional lending shifts the political equilibrium in the direction of better policies, compared with either no IMF assistance or unconditional assistance, it clearly has limits. All aspects of the strategic environment influence conditionality “leverage,” including the borrower’s systemic importance to the world economy; its weight in the IMF’s objective function; the interest rate charged; agenda-setting and other aspects of the negotiating process; and the strength, number, and nature of lobbying groups.

Conditionality must be appropriately tailored to countries’ circumstances to pass the political economy test—country ownership after an assessment of political cost/benefit—as well as for reforms to have the maximum possible effectiveness.4 In “unquestionably low ownership” cases, the world economy is better off if the IMF interrupts lending. In “questionable” ownership cases, building political support for reforms through persuasion, economic education, and other means can gradually weaken special interests’ hold over power.5 Big-bang reforms are appropriate when the IMF’s leverage is greatest, such as amid crises or when domestic opposition is disorganized. Commitments to international organizations help governments eschew inefficient policy instruments. Results-based conditionality and flexible loan tranches improve incentives, although action-based conditionality may be needed to safeguard the integrity of (and maintain popular support for) privatization and other complex reforms.6

As information is imperfect or ambiguous in most reforms, the IMF’s conditional lending is a useful signaling device. If conditionality has sufficient “bite,” only committed governments will sign on to programs, signaling their readiness to undertake reforms and to deter opposition.7 The IMF’s unmatched access to officials makes it a “confidential advisor” to sovereigns.8 The IMF, in backing programs with financial resources, underscores the seriousness of reform announcements and enhances the credibility of its advice.

On the Origins of the Fleming-Mundell Model

How Does Privatization Work? Ownership Concentration and Enterprise Performance in Ukraine

A Panic-Prone Pack? The Behavior of Emerging Market Mutual Funds

The Plutocratic Bias in the CPI: Evidence from Spain

IMF Staff Papers, the IMF’s scholarly journal, edited by Robert Flood, publishes selected high-quality research produced by IMF staff and invited guests on a variety of topics of interest to a broad audience, including academics and policymakers in IMF member countries. The papers selected for publication in the journal are subject to a rigorous review process using both internal and external referees. The journal and its contents (including an archive of articles from past issues) are available online at the Research at the IMF website at http://www.imf.org/research.

Can extensive agendas of structural reforms get in the way of ownership and effective conditionality? Decision makers tend to favor the status quo when faced with complex and infrequent events and the outcomes cannot be easily predicted. Multistage structural conditionality—conditions the IMF imposes on reforms of the financial, budgetary, trade, or pricing systems—can run against policymakers’ preferences, thus adversely affecting ownership and program implementation.9 Because cash-strapped governments will sometimes agree to conditionality even if they are not genuinely committed to reforms, lending must be interrupted early if conditions are not met—before countries become heavily indebted and the IMF has to roll over loans and wait for debt restructurings.10 Separating the IMF’s lending and surveillance functions could reduce reporting biases and ensure stricter enforcement of conditionality.

Does the Fund’s conditional lending limit moral hazard and international contagion? Moral hazard and its consequences, for the world’s taxpayers, is limited by the IMF’s senior creditor status and its excellent record of repayments.11 But lending to governments captured by special interests, without strong conditionality, would mean subsidizing the politically powerful at the expense of unorganized domestic taxpayers. Conditionality that links lending in a crisis to policies during normal times mitigates this moral hazard and limits contagion.

More generally, what is the role of conditionality in poverty reduction programs? Donors grant aid under the veil of partial ignorance about recipient governments’ intentions and capacity. If the ultimate uses of aid are not completely known, unconditional program support raises social spending but distorts its composition. Conditionality allows donors to screen “worthy” recipients but cannot achieve the full-information outcome.12 Aid should be tied to specific projects when recipient governments are poor or of questionable ownership. Program aid has higher monitoring costs but is more flexible and should be granted to relatively affluent governments or those that benefit the poor.13

Beneficial effects of IMF-supported programs will not be realized if conditionality is not implemented. Many programs are interrupted amid political or economic turmoil, under circumstances that make agreements on conditionality for new or revised programs impossible.20 And countries that come repeatedly to the IMF for financing continue to have larger imbalances than other IMF borrowers.21 Poor implementation of conditionality is associated with weak ownership resulting from strong special interests and other domestic political divisions.22 Variables controlled by the IMF, including financial and human effort and the breadth and depth of conditionality, do not seem to affect program implementation once domestic political economy variables are taken into account. Implementation is not related to the number of conditions or the number of prior actions—conditions that must be implemented before the IMF commits its financial resources.23,24 Structural conditionality does not influence medium-term fiscal developments.25

Case study evidence strongly corroborates the importance of ownership in program implementation.26 In some countries, the ambivalence of the top political leaders and resistance by senior officials were key to program failures. When lack of political commitment resulted in stop-and-go program cycles, imposing large numbers of prior actions had limited success, pointing to the need for greater selectivity in lending. In other countries, participatory processes that actively involved the country’s top leadership were instrumental in overcoming domestic divisions.

The research summarized in this article informed the IMF’s latest Conditionality Review, a two-year process that culminated in September 2002 with the Executive Board’s adoption of new guidelines on conditionality. The new guidelines, papers prepared by IMF staff as background for the Board discussions, external contributions, and summaries of the Board’s discussions can be found at www.imf.org/conditionality.

Ibid; and S. Nuri Erbaş, “Primer on Reforms in a Second-Best Ambiguous Environment: A Case for Gradualism,” IMF Working Paper 02/50, 2002.

IMF Independent Evaluation Office, “Evaluation of the Prolonged Use of Fund Resources,” September 2002. Available via the Internet at http://www.imf.org/external/np/ieo/2002/pu/index.htm.

Alun Thomas, “Prior Actions—True Repentance? An Evaluation Based on IMF Programs Over the 1992–1999 Period,” forthcoming IMF Working Paper.

IMF, “Structural Conditionality in IMF-Supported Programs,” 2001. Available via the Internet at http://www.imf.org/external/np/pdr/cond/2001/eng/struct/cond.pdf.

IMF, “Strengthening Country Ownership of Fund-Supported Programs,” 2001. Available via the Internet at http://www.imf.org/external/np/pdr/cond/2001/eng/strength/120501.pdf. Hugh Bredenkamp and Susan Schadler, eds., Economic Adjustment and Reform in Low-Income Countries (Washington: IMF, 1999); and ESAF Evaluation Board, External Evaluation of the ESAF, report by a group of independent experts (Washington: IMF, 1998). 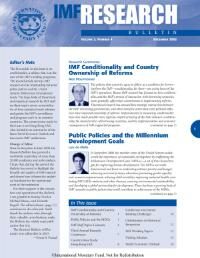