Existing pay-as-you-go (PAYG) pension systems in many industrial, Latin American, and transition economies are projected to come under pressure over the coming decades as the old-age dependency ratio, that is, the number of pensioners relative to the number of workers, increases dramatically in these countries. Two main strategies to address the demographic problem have been suggested: reforming the PAYG systems or introducing funded systems. For macroeconomic management, demographic changes and pension reforms pose important challenges. This article surveys recent research carried out at the IMF on pension reforms.

Under PAYG, each working generation pays for the retired generation’s pensions. Typically, PAYG systems pay defined-benefit pensions with the payroll tax set at a level that finances current pensions. In a funded system, each working generation accumulates savings to provide for its own retirement. Funded pensions are typically paid on a defined-contribution basis, that is, they are determined by the rate of return.

As the dependency ratio rises, working generations will face dramatic increases in payroll taxes under existing PAYG systems, unless governments run large deficits. For example, even if the payroll tax in Japan was increased from 17½ percent to 30 percent over the next 50 years, government transfers to the social security system would still double by 2050.1 Raising payroll taxes by this amount will be politically difficult. Moreover, raising payroll taxes when the demographic shock hits may negatively affect growth by reducing investment, labor force participation, and productivity growth.2

Other parameters besides the payroll tax can be adjusted to strengthen PAYG systems. Pension outlays can be lowered by reducing replacement rates, that is, the ratio of pensions to wages, or by moving toward less generous pension indexation formulas that give less weight to wages and more weight to inflation. Raising the retirement age in line with life expectancy would mitigate the effects of the demographic shock. In addition, the payroll tax could be raised by a small amount immediately (prefunding) to accumulate savings that would be used once the demographic shock hits. A combination of these measures, if undertaken early enough, could be sufficient to make existing systems sustainable.3

An alternative reform strategy is to replace the PAYG systems with funded systems. The latter are often thought to be superior to PAYG systems mainly because they are more conducive to growth. First, funding leads to increased capital accumulation because it raises national saving. Second, funding increases labor supply because the payroll tax is directly linked to benefits and is thus less distortionary than a PAYG payroll tax, which is usually only weakly linked to benefits. However, replacing PAYG systems with funded systems comes at significant transitional costs. The reform generation needs to provide for current pensioners through the PAYG system while also saving for its own retirement. Whether such a reform can help solve the demographic problem is, therefore, an empirical question. For the United States, Kotlikoff, Smetters, and Walliser (1999) argue that the introduction of mandatory funding would improve the position of future generations substantially, while leaving the reform generation only slightly worse off.4 In related work, these authors show that transition costs are lower if privatization is voluntary, and, focusing on intragenerational redistribution, privatization can be designed to pose a higher share of the transition costs on those with high lifetime incomes.5 Cubeddu (2000) finds that the U.S. social security system redistributes in favor of females and noncollege graduates; privatizing social security would reduce this redistributive effect.6

Stabilization Policies and Structural Reforms in Albania Since 1997: Achievements and Remaining Challenges

Foreign Direct Investment in China: Some Lessons for Other Countries

Issues in Electronic Banking: An Overview

The claimed advantages of funding are carefully assessed in a number of studies. Brooks (2000) shows that funding also suffers from the adverse effects of a demographic shock because asset prices fall as their relative supply—which is a function of the dependency ratio—increases.7 Barr (2000) casts doubts on the link between funding and growth because transition costs of moving from PAYG to funding would largely offset any increase in saving. Moreover, disincentives in existing PAYG systems could be removed through design changes.8 Finally, Valdivia (1999) shows that the welfare gains from longevity insurance provided by PAYG—benefits are paid until death, independent of contributions—outweigh the advantages of funding without such insurance.9 However, longevity insurance can also be provided in funded systems through annuities.10

A critical question is how national saving would react to the introduction of a funded system. Dayal-Gulati and Thimann (1997) find that social security expenditure lowers private saving and the existence of funding schemes increases private saving in a sample of Southeast Asian and Latin American countries.11 Kramer and Li (1997) show in a dynamic general equilibrium model that PAYG systems can have a negative impact on aggregate saving, income, and wages.12 For the United States, Walliser (1999) finds that the response of national saving would depend on the details of the reform.13 Mackenzie and others (2001) argue that changes in national saving, upon replacing PAYG with funding are likely to be small.14

The World Bank has suggested a three-pillar pension system which combines the advantages of PAYG and funding.15 The system’s first pillar is mandatory PAYG, providing minimum income during retirement. The second pillar is mandatory funding, ensuring that myopic individuals accumulate savings for retirement. The third pillar is voluntary funding. Hemming (1999) argues that the question of having a mandatory funded pillar in the pension system is a question about the role of government.16 A paternalistic government may favor mandated funding. A government that leaves more room for individual choice may favor providing only a minimum income during retirement, through a mandatory PAYG pillar. Heller (1998) points out that governments would acquire a conjectural liability when mandating a pension system based on private providers.17 Hence, moral hazard may distort the behavior of savers and providers. Moreover, conjectural liabilities complicate the assessment of fiscal policy in so far as they affect public sector size, the burden of fiscal measures, and the fiscal stance.

Researchers at the IMF have studied specific pension reform proposals. For example, Agulnik, Cardarelli, and Sefton (2000) find that the proposals for the United Kingdom in the 1998 Pensions Green Paper fall short of obviating further tax increases.18 IMF staff have analyzed pension systems in several countries, including Greece, the Baltics, the Czech Republic, and Albania.19 Current pension systems, even after some reforms, still appear vulnerable to the demographic shock. Further reforms should focus on strengthening existing PAYG systems through adjusting the system parameters. The introduction of mandatory funding should only be an additional step. In the case of India, which is not faced with a demographic shock, Gillingham and Kanda (2001) conclude that the pension system requires reform regarding management and administration of pension funds, financial soundness, and the provision of retirement income for the elderly poor.20

In addition to the dominant theme of pension reform, IMF staff have examined a number of specific issues. Razin, Sadka, and Swagel (2001) present a model that explains the empirical puzzle of a negative correlation between the dependency ratio and labor taxes as well as the generosity of social transfers.21 Immigration is shown to help alleviate the demographic burden on pension systems, even when immigrants are low earners and net beneficiaries.22 Baldacci (2000) suggests a statistical system for the provision of data to monitor the social security reform process.23 Other IMF research has examined: the effects of social security contributions on the size of the shadow economy; the possible effects of harmonization of social security systems on EU-wide labor mobility; and the effect of measurement errors in the CPI on social security payments in the United States.24

Robin Brooks, “What Will Happen to Financial Markets When the Baby Boomers Retire?” IMF Working Paper 00/18, 2000.

Assaf Razin, Efraim Sadka, and Phillip Swagel, “The Aging Population and the Size of the Welfare State,” NBER Working Paper No. 8405, 2001 (also forthcoming in Journal of Political Economy).

This special volume of IMF Staff Papers takes stock of the economic transformation in the formerly centrally planned economies of Eastern Europe and the former Soviet Union. The papers were written by IMF staff and distinguished academics who were invited to contribute to the volume. Some of these papers were presented at the American Economic Association meeting in Boston in January 2000.

Ten Years of Transition: Looking Back and Looking Forward

The Transition in Central and Eastern Europe: The Experiences of Two Resident Representatives

Ten Years After… Transition and Economics

Recovery and Growth in Transition: A Decade of Evidence

What Moves Capital to Transition Economies?

The Gains from Privatization in Transition Economies: Is “Change of Ownership” Enough?

Federalism With and Without Political Centralization: China Versus Russia

IMF Staff Papers is available online in full-text format at the Research at the IMF website: http://www.imf.org/research. 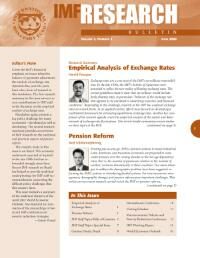