Recently, governments have become more interested in using private, nonmarket income transfers to supplement or substitute for government income transfers. The motivations for this include fiscal necessity, the belief that the private sector can allocate resources more efficiently than the government sector, and the negative effects of government transfer programs on their recipients′ behavior.1 Although private nonmarket transfers are driven by individual altruism, they can be manipulated by the government through the use of subsidies and taxes. Such an approach may be a more cost–effective way for governments to deliver social insurance, foreign aid, or debt relief, for example.

An essential question raised by this interest in private transfers is the size of the optimal subsidy. There is an established argument in the economics literature that private transfers ought to be subsidized because they give utility to both the giver and the recipient of the transfer.2 But this analysis has not recognized that nonmarket income transfers generally function as insurance against income risk. Income risk is endogenous risk, in that the level of the risk a person or country faces depends on the actions taken by the individual.3 A nation′s income risk, for example, depends on the fiscal, monetary, and development policy actions chosen by the government. Insurance provided in the presence of endogenous risk is subject to moral hazard problems, which can be seen by tracing the effects of the insurance through the affected market. This suggests that the optimal subsidy to private nonmarket income transfers needs to take into consideration the market reaction to the moral hazard problems created by the transfers.

We begin with an economy populated by two types of individuals: benefactors and recipients. Benefactors are paired with recipients, toward whom they feel altruistic. That is, the recipient′s utility is an argument in the benefactor′s utility function.4 Recipients′ utility is a function of only their own consumption and effort. We assume that altruism is asymmetric only for the sake of clarity. Making altruism reciprocal and symmetric will not change the qualitative results.5

where yb denotes the benefactor′s income, yr the recipient′s income, ur(yr) the recipient′s utility, and 0 ≤ β ≤ 1 is the altruism factor. We assume that the utility function u(.) is identical across agents, with ui′ > 0 and uj′′ < 0 for i = b, r.

We incorporate risk into the model by specifying the process that determines the recipient′s income. Suppose that the recipients enter the labor market for a single period and supply labor to firms. Output can be high (xH) or low (xL). The probability that the low–output state occurs is P(e), where e denotes the worker′s effort, which is unobservable to both the firm and the benefactor; we assume P′ < 0 and P′′ > 0. Wages are yL in state L and in state H, where yL < yH. The difference in wages across states of nature reflects a moral hazard in the labor market. Also, risk aversion on the part of recipients implies that yL > yH and yH < xH Competitive labor and output markets dictate that yL and yH will maximize expected profits, while competition drives expected profits to zero. Hence,

The recipient′s expected utility is

where v(e) is a strictly convex function reflecting the recipient′s disutility of effort and urL and urH are defined as above. The recipient chooses effort to maximize utility. The first–order condition for the recipient is

It is easy to show6 that , ∂e*/∂yL < 0, while ∂e*/∂yH > 0. The impact of private transfers on the optimal choice of effort by the recipient is

Equation (3) shows that the transfer essentially provides insurance against low output, so the recipient reduces the effort he puts into avoiding the low–output state. In other words, the recipient uses the income from the transfer to effectively purchase a reduction in labor effort.7 This reflects the moral hazard problem between the benefactor and the recipient.

The benefactor′s expected utility, EUb is

where Cb = yb – g is the benefactor′s net consumption, yb is her (exogenous) income, and g is the transfer to her beneficiary (the recipient). The benefactor decides how much to give to the recipient as a transfer.8 The first–order condition for the private transfer decision is9

and, using the envelope condition to substitute out condition (2), the above condition reduces to

which yields g* = g(yb, yL , yH ; e*, β). It is straightforward to show that higher altruism leads to higher transfers, g*β ≡ ∂g*/∂β > 0, and that higher wages in either state lead to lower transfers:

We now move to the market reaction to private transfers. We have shown that greater altruism on the part of givers (benefactors) leads to larger transfers, reduced labor effort, and a higher probability of realizing the low–output state, which implies lower expected profits for firms. Since expected profits are lower, firms must reduce costs by lowering expected wages. But they must also adjust the relationship between the high wage and low wage in order to motivate the recipients to put forth greater effort. Given that the expected wage must be lower, we focus our analysis on wage dispersion. In other words, given e*, g*, and the conditions already derived, we examine the impact of increases in β on yH/yL To analyze the impact of altruism on wage dispersion, we differentiate the zero–profit condition with respect to β:

where, as we have shown previously, ∂e*/∂g < 0 while ∂g*/∂β > 0. Since risk aversion on the part of the recipient implies that yL > xL and yH < xH, an increase in β moves the state–contingent wages yL and yH further apart. Thus, greater altruism results in lower expected wages and greater wage dispersion. The givers′ altruism toward the recipients exacerbates the moral hazard problem that already exists between recipients and firms. In other words, private transfers impose a negative externality on the labor market.

The market responds to the negative externality in private transfers by increasing the dispersion between the high wage and the low wage. This creates an increase in the recipient′s market income risk, which is inefficient.

First, consider the planner′s choice of transfer. Differentiating the social planner′s objective function with respect to the transfer yields11

The question raised by this result is how much the welfare effects of the negative externality offset the double–counting effect. Which effect dominates? In order to answer this question, we compare the optimal subsidies from the exogenous risk and endogenous risk models. Suppose that transfers are subsidized at rate s, where the subsidy is financed by a lump–sum tax that is taken as given by individuals, as in Kaplow (1995, 1998). This reduces the benefactor′s cost of making a transfer of size g to (1 – s)g. The optimal subsidy is the one that would induce the benefactor to behave like the social planner with respect to the choice of private transfers. The first–order condition in this case is

Solving for this s under exogenous uncertainty yields13

Now we derive the optimal subsidy in the endogenous risk case. First, we rewrite the social planner′s first–order condition (5) using the envelope condition to substitute out condition (2). Doing so gives

We know that owing to the moral hazard in the labor market, the recipient is not fully insured, so that urH > urL and (1 – P)u’rH < Pu’rL. We also know that ∂y*L / ∂g < 0. The benefactor′s first–order condition for subsidized private transfers is

Note that the optimal subsidy in the endogenous risk case has two terms. The first term, 1/(1 + β), which is positive, is equal to the subsidy from the exogenous risk case. The additional term, which is negative, represents the market response to the negative externality. As β increases, the first term decreases and the second term becomes more negative. The interaction of altruism and the response of the market to private transfers will determine whether the optimal subsidy is positive, zero, or negative (a tax).14 The higher the level of altruism, and the stronger the market response to private transfers, the lower the subsidy will be.

A useful way to demonstrate the effect of endogenous risk on optimal private transfers is to perform a simple calibration exercise that calculates the size of the optimal subsidy under various parameter values. Figure 1 shows the optimal

subsidy in equation (8) as a function of the altruism parameter β, for varying choices of the market response to private transfers, ∂y*L / ∂g. Each line in the figure corresponds to a progressively higher magnitude of ∂y*L / ∂g, beginning with the certainty or exogenous risk case of ∂y*L / ∂g = 0, which corresponds to the subsidy calculated by Kaplow (1995). The remaining parameters P and ur′ / ub′ are held constant over all calculations.15

Alternatively, we could view private transfers as motivated by the “warm glow” that giving imparts to benefactors, as is discussed in Atkinson (1976) and Andreoni (1990). This specification places the transfer itself in the benefactor′s utility function so that utility is given by Ub(yb, g)– Doing so would not alter any of the results. See Atkinson (1976, p. 15).

See Bernheim and Stark (1988) and Stark (1993) for the argument that symmetric altruism does not completely resolve conflicts between paired agents.

Please refer to the appendix for details.

Holtz–Eakin, Joulfian, and Rosen (1993) show, in an empirical study, that labor supply and labor force participation drop as a result of large inheritances.

Alternatively, we could choose to make the transfer state–contingent, so that it is gL in the low–output state and gH in the high–output state. Doing so does not affect any of the qualitative results presented below. See, for example, Chami (1998).

Please refer to the appendix for details.

See Chami and Fullenkamp (2000) for a complete discussion of the exogenous risk case.

This is also the optimal subsidy under certainty. See Kaplow (1995).

Alternatively, using a social welfare function of the form ub + EUr alters the result, in that the subsidy unambiguously becomes a tax.

These parameters were calculated as follows. The probability of realizing a bad output state was calculated as the average time the United States spent in recession relative to time it spent in expansion during 1945–96, using the National Bureau of Economic Research′s business cycle dates. This number, about 1/6, represents the probability that any given month will be a recessionary month. The ratio of marginal utilities was calculated using the constant–relative–risk–aversion (CRRA) utility function u(c) = c1 – γ/ (1 – γ) with the risk–aversion parameter y set equal to four. This value corresponds to estimates in the finance literature and represents a moderate level of risk aversion. The marginal utility of the recipient was calculated assuming a consumption level equal to the twentieth percentile of annual U.S. household income ($14,768), while the marginal utility of the benefactor was calculated assuming a consumption level equal to the median annual U.S. household income ($35,492). These statistics are from United States, Bureau of the Census (1998).

Large gifts from parents to children (more than $10,000 per year) are taxed in the United States. Perhaps this is a special case in which the altruism level is high enough, and the market response great enough, to justify such a tax. 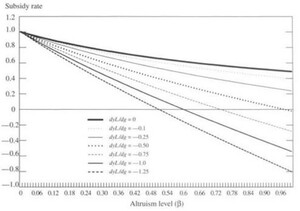