IMF Staff Papers draws on IMF Working Papers, which are research studies by members of the IMF’s staff. A list of Working Papers issued in 1998:4 follows:

IMF Staff Papers draws on IMF Working Papers, which are research studies by members of the IMF’s staff. A list of Working Papers issued in 1998:4 follows:

“The Effects of Tax Wedges on Hours Worked and Unemployment in Sweden,” by Alun Thomas [98/152]

“Monetary Policy in a Small Open Economy with Credit Goods Production,” by Jorge A. Chan-Lau [98/153]

“Are Currency Crises Predictable? A Test,” by Andrew Berg and Catherine Pattillo [98/154]

“Financial Market Contagion in the Asian Crisis,” by Taimur Baig and Han Goldfajn [98/155]

“Soft Exchange Rate Bands and Speculative Attacks: Theory, and Evidence from the ERM since August 1993,” by Leonardo Bartolini and Alessandro Pruti [98/156]

“Demand for Money in Mozambique: Was There a Structural Break?” by Marco Piñón-Farah [98/157]

“Determinants of Inflation, Exchange Rate, and Output in Nigeria,” by Louis Kuijs [98/160]

“The Impact of Human Capital on Growth: Evidence from West Africa,” by Emilio Sacerdoti, Sonia Brunschwig, and Jon Tang [98/162]

“The Volatility of the Relative Price of Commodities In Terms of Manufactures Across Exchange Regimes: A Theoretical Model,” by Hong Liang [98/163]

“The Decline of Traditional Sectors in Ureal: The Role of the Exchange Rate and the Minimum Wage” by Eric V, Clifton [98/167]

“Managing Capital Flows: Lessons from the Experience of Chile,” by Bernard Laurens and Jaime Cardoso [98/168]

“Do IMF-Supported Programs Work? A Survey of the Cross-Country Empirical Evidence,” by Nadeem UI Haque and Mohsin S. Khan [98/169]

“Monetary Policy in the Aftermath of Currency Crises: The Case of Asia.” by Ilan Goldfajn and TaimurBaig [98/170]

“International Capital Flows and National Creditworthiness: Do the Fundamental Things Apply as Time Goes By?” by Paul Cashin and C. John McDermott [98/172]

“Fixed-Income Markets in the United States, Europe, and Japan: Some Lessons for Emerging Markets,” by Garry J. Schinasi and R. Todd Smith [98/173]

“The Wage Bargaining Structure in Norway and Sweden and its Influence on Real Wage Developments.” by Alun Thomas [98/174]

“Will Fiscal Policy Be Effective Under EMU?” by Marco Cangiano and Eric Mottu [98/176]

“Fundamental Determinants of Inequality and the Role of Government,” by Vilo Tanzi [98/178]

“Correlations Between Real Interest Rates and Output in a Dynamic International Model; Evidence from G-7 Countries.” by Jahanara Begum [98/179]

“Why Do Countries Use Capital Controls?” by R. Barry Johnston and Natalia T. Tamirisa [98/181]

“The Dynamic Macroeconomic Effects of Tax Policy in an Overlapping Generations Model,” by Ben J. Heijdra and Jenny E. Ligthart [98/182] 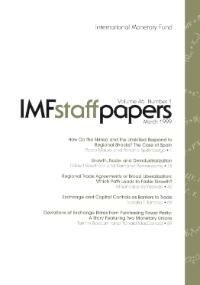