“Explaining Investment in the WAEMU” by Athanasios Vamvukidis [198/99]

“From Inflation to Growth: Eight Years of Transition” by Peter Christolferscti and Peter Doyle [98/100]

“Inflation and Money Demand in Albania” by Sanjay Kalra [98/101]

“Disinflation in Spain: The Recent Experience” by Nicolas Sobczak [98/106]

“Consequences of the Economic and Monetary Union tor the Coordination of Tax Systems in the European Union: Lessons from the U.S. Experience” by Vito Tanzi and Howell H. Zee [98/115]

“Deviations from Uncovered Interest Parity: A Global Guide to Where the Action Is” by Evan Tanner [98/117]

“Fixed Investment and Capital Flows: A Real Options Approach” by Jorge A. Chan-Lau and Peter B. Clark [98/125]

“Financial Crisis and Credit Crunch as a Result of Inefficient Financial intermediation—With Reference to the Asian Financial Crisis” by Jorge A. Chan-Lau and Zhaohui Chen [98/127]

“Output Decline and Recovery in Uzbekistan: Past Performance and Future Prospects” by Gunther Taube, and Jeromin Zettelmeyer [98/132]

“The Role of Allocation in a Globalized Corporate Income Tax” by Jack M. Mintz [98/134]

“Is the United Slates CPI Biased Across Income and Age Groups?” by Nuri Erbas and Chera L. Sayers [98/136]

“Managing Corporate Distress in the Philippines: Some Policy Recommendations” by Cheng Hoon Lim and Charles Woodruff [98/138]

“Can the Neoclassical Model Explain the Distribution of Foreign Direct Investment Across Developing Countries?” by Harm Zebregs [98/139]

“From Autarky to Integration: Imitation. Foreign Borrowing, and Growth” by Rachel van Elkan [98/140]

“Optimal Fiscal Policy and the Environment” by Jenny E. Ligthart [98/46] 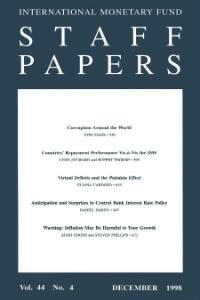