Staff Papers draws on IMF Working Papers, which are research studies by members of the Fund’s staff. A list of Working Papers issued in 1995:2 follows.

“The Employment and Wage Effects of Oil Price Changes: A Sectoral Analysis,” by Michael Keane and Eswar Prasad [95/37]

“Recession and Recovery in the United Kingdom in the 1990s: A Vector Autoregression Approach,” by Luis Catao and Ramana Ramaswamy [95/40]

“Exchange Rate Movements and Inflation Performance: The Case of Italy,” by Robert Ford and Thomas Krueger [95/41]

“Exchange Rate Bands and Shifts in the Stabilization Policy Regime: Issues Suggested by the Experience of Colombia,” by Alberto Carrasquilla [95/42]

“Stabilization in the Baltic Countries: A Comparative Analysis,” by Tapio O. Saavalainen [95/44]

“Growth, Nontradables, and Price Convergence in the Baltics,” by Anthony Richards and Gunnar Tersman [95/45]

“The Taxation of Financial Assets: A Survey of Issues and Country Experiences,” by Vito Tanzi and John King [95/46]

“The Burden of Sub-Saharan African Own Commitments in the Uruguay Round—Myth or Reality?” by Piritta Sorsa [95/48]

“Hysteresis in Exports,” by Giorgia Giovannetti and Hossein Samiei [95/52]

“Asset Market and Balance of Payments Characteristics: An Eclectic Exchange Rate Model for the Dollar, Mark, and Yen,” by Ronald MacDonald [95/55]

“NonLinear Effects of Inflation on Economic Growth,” by Michael Sarel [95/56]

“Capital Flows in Central and Eastern Europe: Evidence and Policy Options,” by Guillermo Calvo, Ratna Sahay, and Carlos A. Végh [95/57]

“Some Considerations Relevant to Prefunded Pensions in France,” by Joaquim V. Levy [95/64] 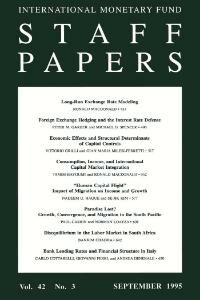