Staff Papers draws on IMF Working Papers, which are research studies by members of the Fund’s staff. A list of Working Papers issued in 1994 follows.

Staff Papers draws on IMF Working Papers, which are research studies by members of the Fund’s staff. A list of Working Papers issued in 1994 follows.

“ERM Money Supplies and the Transition to EMU,” by Marcel Cassard, Timothy Lane, and Paul Masson [94/1]

“Measuring the Transition: A User’s View on National Accounts in Russia,” by Vincent Koen [94/6]

“Export Instability and the External Balance in Developing Countries,” by Atish Ghosh and Jonathan D. Ostry [94/8]

“The Macroeconomic Determinants of Commodity Prices,” by Eduardo Borensztein and Carmen Reinhart [94/9]

“Shortage Under Free Prices: The Case of Ukraine in 1992,” by Alexander Sundakov, Rolando Ossowski, and Timothy Lane [94/10]

“Monetary Policy in Unified Currency Areas: The Case of the CAMA and ECCA During 1976–90,” by Jean-Claude Nascimento [94/11]

“Real Estate Price Inflation, Monetary Policy, and Expectations in the United States and Japan,” by Hossein Samiei and Garry Schinasi [94/12]

“Withholding Taxes and the Cost of Public Debt,” by Harry Huizinga [94/18]

“Real Exchange Rates and the Prices of Nontradable Goods,” by Stefano Micossi and Gian Maria Milesi-Ferretti [94/19]

“Targeting the Real Exchange Rate: Theory and Evidence,” by Guillermo A. Calvo, Carmen M. Reinhart. and Carlos A. Végh [94/22]

“Economics, Politics, and Ethics of Primary Commodity Development: How Can Poor Countries in Africa Benefit the Most?” by Uma Lele, James Gockowski, and Kofi Adu-Nyako [94/23]

“Systemic Requirements for Monetary Stability in Eastern Europe and the Former Soviet Union,” by Jacek Rostowski [94/24]

“An Overview of the Japanese Distribution System: The Case of the Automobile Industry,” by Sayuri Shirai [94/26]

“Changing Patterns in Public Expenditure Management: An Overview,” by A. Premchand [94/28]

“Labor Market Institutions and Flexibility in Italy: A Critical Evaluation and Some International Comparisons,” by Dimitri G. Demekas [94/30]

“The Use of Financial Spreads as Indicator Variables: Evidence for the U.K. and Germany,” by E.P. Davis and S.G.B. Henry [94/31]

“Economic Determinants of Fund Financial Arrangements.” by Malcolm Knight and Julio A. Santaella [94/36]

“Improving the Management of a Central Bank—A Case Study,” by John Mendzela [94/37]

“A Framework for the Analysis of Pension and Unemployment Benefit Reform in Poland,” by William R. M. Perraudin [94/40]

“The Internationalization of Yen and Key Currency Questions,” by Toru Iwami [94/41]

“A Formal Model of Optimum Currency Areas,” by Tamim Bayoumi [94/42]

“Information Externalities Affecting the Dynamic Pattern of Foreign Direct Investment: The Case of China,” by Dongpei Huang and Sayuri Shirai [94/44]

“Trade Reforms of Uncertain Duration and Real Uncertainty: A First Approximation,” by Guillermo A. Calvo and Enrique G. Mendoza [94/45]

“Searching for the Virtues of the European Model,” by Gilles Saint-Paul [94/46]

“The Trade and Welfare Consequences of U.S. Export-Enhancing Tax Provisions,” by Donald Rousslang and Stephen Tokarick [94/50]

“Refinance Instruments: Lessons from Their Use in Some Industrialized Countries,” by Bernard Laurens [94/51]

“Supply Pressure and the Export-Import Performance in the Japan–U.S. Bilateral Trade,” by Yusuke Onitsuka [94/53]

“Are the Unemployed Unemployable?” by Gilles Saint-Paul [94/64]

“Relative Prices and Economic Adjustment in the U.S. and the EU: A Real Story About European Monetary Union,” by Tamim Bayoumi and Alun Thomas [94/65]

“How Does Learning Affect Inflation After a Shift in the Exchange Rate Regime?” by Laura Papi [94/70]

“The Path of Output from Plan to Market,” by Thorvaldur Gylfason [94/71]

“Determining the Value of a Financial Unit of Account Based on Composite Currencies: The Case of the Private ECU,” by David Folkerts-Landau and Peter M. Garber [94/72]

“The Changing Mix of Disequilibria During Transition: A Romanian Background,” by Daniel Daianu [94/73]

“Fiscal Federalism in Europe—Is It a Necessary Precondition for a Successful European Economic and Monetary Integration?” by Norbert Berthold [94/74]

“The Behavior of Real Interest Rates in Exchange-Rate Based Stabilization Programs,” by Pierre-Richard Agénor [94/75]

“The Impact of Controls on Capital Movements on the Private Capital Accounts of Countries’ Balance of Payments: Empirical Estimates and Policy Implications,” by R. Barry Johnston and Chris Ryan [94/78]

“Restraining Yourself: Fiscal Rules and Stabilization,” by Tamim Bayoumi and Barry Eichengreen [94/82]

“The Political Economy of Budget Deficits,” by Alberto Alesina and Roberto Perotti [94/85]

“On Corruption and Capital Accumulation,” by Carlos M. Asilis and V. Hugo Juan-Ramon [94/86]

“Long-Run Determinants of the Real Exchange Rate: A Stock-Flow Perspective,” by Hamid Faruqee [94/90]

“Are Prices Countercvlical > Evidence from the G-7,” by Ban kirn Chadha and Eswar Prasad [94/91]

“How Does Industrialization Affect the Structure of International Trade? The Japanese Experience in the Pacific Basin, 1975–85,” by Sayuri Shirai and Dong-pei Huang [94/95]

“Sequencing of Financial Sector Reforms: A Review,” by Vicente Galbis [94/101]

“The Pay-As-You-Earn Tax on Wages—Options for Developing Countries and Countries in Transition,” by Koenraad van der Heeden [94/105]

“Tax Policy and the Environment: Theory and Practice,” by Ronald T. McMor-ran and David C.L. Nellor [94/106]

“The Role of Offshore Centers in International Financial Intermediation,” by Marcel Cassard [94/107]

“Disequilibrium in the Labor Market in South Africa,” by Bankim Chadha [94/108]

“Achy But Healthy: Lessons from the Israeli Health Sector,” by Yaakov Kop [94/112]

“Measures of External Competitiveness for Germany,” by Robert A. Feldman [94/113]

“Macroeconomic Policies and Smuggling: An Analysis of Illegal Oil Trade in Nigeria,” by Jian-Ye Wang [94/115]

“Defining, Measuring and Alleviating Poverty in an Economy in Transition: The Case of Lithuania,” by Peter K. Cornelius [94/116]

“Monetary Aggregation: A Reconciliation of Theory and Central Bank Practice,” by Hugh Pill and Mahmood Pradhan [94/118]

“Foreign Exchange Auctions and Fixing: A Review of Performance,” by Arto Kovanen [94/119]

“Public Education Expenditure and Other Determinants of Private Investment in the Caribbean,” by Benedict Clements and Joaquim V. Levy [94/122]

“Changes in the Relationship Between the Long-Term Interest Rate and its Determinants,” by William Lee and Eswar Prasad [94/124]

“The Equity Impact of Value-Added Tax in Bangladesh,” by Shahabuddin M. Hossain [94/125]

“Noise Trading, Transaction Costs, and the Relationship of Stock Returns and Trading Volume,” by Charles Kramer [94/126]

“Trade Reform and Inflation Stabilization,” by Vivek B, Arora and Manmohan S. Kumar [94/130]

“The Meaning of Balance of Payments Statistics in an Interdependent World,” by Jack J. Bame [94/131]

“The Payments System and its Effects on Monetary Operations: Recent Experience in the Russian Federation,” by Gabriel Sensenbrenner and V. Sundararajan [94/133]

“Fixed or Floating Exchange Regimes: Does It Matter for Inflation?” by Peter J. Quirk [94/134]

“Improving the Estimation Methodology of Monthly Data in Direction of Trade Statistics,” by Xiaoning Gong [94/142]

“Demographic Dynamics and the Empirics of Economic Growth,” by Michael Sarel [94/143}

“The Credibility of the United Kingdom’s Commitment to the ERM: Intentions versus Actions,” by Paul Masson [94/147]

“Toward a Framework for a Budget Law for Economies in Transition,” by Bill Allan [94/149]

“Asset Prices, Financial Liberalization, and the Process of Inflation in Japan,” by Alexander W. Hoffmaister and Garry J. Schinasi [94/153]

“How Large Was the Output Collapse in Russia? Alternative Estimates and Welfare Implications,” by Evgeny Gavrilenkov and Vincent Koen [94/154]

“Human Capital Flight: Impact of Migration on Income and Growth,” by Nadeem U. Haque and Se-Jik Kim [94/155]

“Analysis of the Yield on Foreign Exchange Bearer Certificates: Rationality and Financial Behavior in Pakistan,” by Karim Abdel-Motaal [94/156]

“The Response of Wages and Labor Supply Movements to Employment Shocks Across Europe and the United States,” by Alun H. Thomas [94/158]

“Sterilization of Money Inflows: Difficult (Calvo) or Easy (Reisen)?” by Jeffrey A. Frankel [94/159] 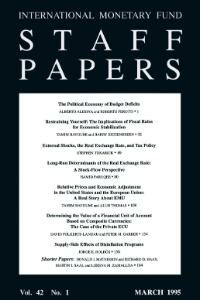