The capital requirements that will enable Eastern Europe to approach the standard of living enjoyed by the European Community (EC) are assessed. A Western constant elasticity of substitution (CES) production function, parameterized on the EC, is assumed to apply, with certain inefficiency factors, to Eastern Europe in 1992.1 Purchasing power parity (PPP) estimates are used to derive an initial position for Eastern Europe for 1992, including estimates of the starting capital stock. The model then illustrates the capital needed to achieve the postulated growth—12½ percent a year for Eastern Europe as a whole—given certain assumptions. A particular focus is the potential role of efficiency gains in this process.

I. Methodology and Initial 1992 Position

The basic approach is to characterize supply conditions in Eastern Europe in 1992 with a Western-style CES production function.2 This production function links productivity growth to capital accumulation and improvements in the efficiency of the use of labor and capital services. A series of assumptions—on output, capital stock, and inefficiency parameters—are required to apply this model to Eastern Europe. These assumptions are discussed below.

The aim is to value output of Eastern European countries in 1992 so that gross domestic product (GDP) and the resulting capital stock generated by the model are comparable with those of the EC. PPP exchange rates seemed best able to meet these twin objectives, although inevitably, these projections are highly uncertain. In all countries, the projected PPP exchange rate is considerably more appreciated than the 1992 official projected rates. Projected per capita GDP using PPP exchange rates ranges from $2,800 in Romania (14 percent of the 1992 EC average) to $8,400 in Czechoslovakia (41 percent of the EC average) (Table 1), Based on projected official exchange rates, per capita GDP of Eastern Europe as a whole is about 10 percent of the 1992 EC average; based on PPP rates, it is slightly over 20 percent.

(In percent, unless otherwise noted)

(In percent, unless otherwise noted)

Targets for per capita GDP levels were postulated for each Eastern European country in relation to the projected EC average (Table 1). A target of two-thirds of the projected EC average was chosen for Czechoslovakia and Hungary, and one-half for Bulgaria, Poland, and Romania; the average for the region as a whole is around 54 percent. The resulting required annual growth rates of GDP (allowing for population growth) range from 7.7 percent in Czechoslovakia to 17 percent in Romania; for the region as a whole, the rate is 12½ percent.

On the basis of a series of assumptions4 and assuming neither g nor h exceeds unity (the EC level), the initial capital stock for Eastern Europe as a whole would lie in the range of $2.6 trillion (g = 0.325) to $0.8 trillion (g = 1). In practice, the extremes of this range would appear implausible. The 1992 position of Eastern Europe is shown in Table 2, based on the assumption, admittedly arbitrary, that g equals h. Relative productivity for Eastern Europe as a whole (output per worker) is 21 percent of the EC average—ranging from 13 percent in Romania to 35 percent in Czechoslovakia. This lower relative productivity is attributable to the lower capital-labor ratio in Eastern Europe compared to the EC and the general efficiency in the use of production factors, and the labor-specific efficiency factor. The usable capital stock for the region as a whole is estimated at $1.3 trillion.

Note: Assumptions are as follows: σ (elasticity of substitution between labor and capital) = 0.5;f(elasticity of labor services with respect to the capital-output ratio) =0.5; labor share = 0.7; and g = h. EED5 is a composite of the five countries covered in this study.

Note: Assumptions are as follows: σ (elasticity of substitution between labor and capital) = 0.5;f(elasticity of labor services with respect to the capital-output ratio) =0.5; labor share = 0.7; and g = h. EED5 is a composite of the five countries covered in this study.

A series of simulations to 2002 was carried out on the basis of various assumptions and projections, such as growth of the labor force. A striking result is the importance of efficiency gains—that is, movements in the efficiency factors from their 1992 position. For Eastern Europe as a whole, with no changes in these efficiency factors, cumulative investment of $17 trillion would be required to achieve the annual growth target of 12½ percent. Reaching this target would require investment-income (GDP) ratios well in excess of 100 percent and a capital-tabor ratio nearly double the projected EC level for 2002 (reflecting the continued inefficient use of capital), with extremely low rates of return to capital. This scenario is clearly implausible. However, if EC efficiency levels could be achieved by 2002, cumulative investment needs would be around $2.5 trillion. Investment-income ratios would range around 30 percent, and the required 2002 capital-labor ratio would be less than two-fifths the EC level.

A key question therefore is what efficiency improvements can be expected in Eastern Europe. Clearly, movements in the efficiency factors are a function of the reform policies pursued. Improvements are likely to result from liberalization of markets (improving factor allocation), establishment of effective ownership (privatization), institution building in legal, statistical, accounting and banking systems, establishment of local administrations, and human and physical capital formation. It would not be unduly optimistic to expect most of the benefits from liberalizing markets and establishing effective ownership to be achieved by 2002—although the ownership structure may still differ substantially from that of most EC countries.

Most institution building may also be completed by 2002, but it is questionable whether these institutions will have achieved the standards of effectiveness of EC institutions. Accumulation of human capital in such areas as the law, accounting, customer service, product innovation, management, marketing, and banking—which is necessary to breathe life into the new institutional framework—takes years. Equally, the removal of infrastructural impediments is likely to be a lengthy process, extending beyond 2002.

This qualitative discussion suggests that it is reasonable to expect major efficiency gains over the projection period, but complete elimination of all inefficiencies is unlikely. On the assumption that half the current efficiency gap can be eliminated by 2002, cumulative investment needs would be about $6.5 trillion for Eastern Europe as a whole, with investment-income ratios from 65 percent to 82 percent.

Table 3 indicates the impact, on a country-by-country basis, of achieving current EC average levels of efficiency by 2002 and contrasts this with a more modest efficiency improvement of slightly more than one-half. Overall, cumulative investment needs are less than half with the more rapid efficiency gain. A key factor influencing relative country performance is the extent to which initial differences in efficiency between countries are expected to persist or efficiencies are expected to converge. If efficiencies converge, investment needs in the currently more efficient countries—Czechoslovakia and Hungary—rise in relative terms, while the reverse is the case if efficiency catch-up is limited.

The production function model described here should be used with caution. Projection of investment requirements calls for a heroic set of assumptions, and quantitative results are therefore bounded by large ranges. Further work on the experience in other countries with efficiency gains, the relative productivity of Eastern European countries, different definitions of capital stock and investment, and different depreciation assumptions would probably improve the application of the framework provided by the model. But the limits of any such further work should be emphasized. Given that the approach assumes the application of an EC production function in Eastern Europe and assumes efficiency parameters applicable to such a function, there is inevitably little firm economic grounding for either the initial value or the subsequent movement of these parameters. Further research will not eliminate a large element of conjecture.

The advantage of the production function model is that it provides a framework for illustrating the importance of factors that determine future capital needs in Eastern Europe. In particular, it emphasizes the crucial role to be played by efficiency improvements in determining both future capital needs and the likelihood that these will be met. Thus, if average EC efficiency levels can be achieved in ten years, growth close to the targets postulated—around 12½ percent a year for the region as a whole—is potentially achievable with investment-income ratios of about 30–40 percent, cumulative investment of about $2–3 trillion, and a high real rate of return to capital.

The policy implication of the framework described is the imperative to implement reforms, such as the liberalization of markets and the establishment of effective ownership and institution building in legal, statistical, and accounting systems. These reform policies will promote both efficiency gains and investment. Direct foreign investment will no doubt also play an important role in efficiency improvements.

But even with rigorous reform policies, it is questionable whether the elimination of alt current inefficiencies by 2002—particularly for the currently less efficient countries—is realistic. If significant inefficiencies persist, the capital needs required to achieve the postulated targets would be much higher than $2–3 trillion. It is doubtful whether, in such circumstances, these capital needs could be financed. It is also questionable whether rates of return would be sufficient to attract this level of investment. If current EC levels of efficiency cannot be achieved, the growth targets could well be unrealistic.

Anthony Boote is a Deputy Division Chief in the Policy Development and Review Department.

This paper, which is a shortened version of Boote (1992), was written while he was a Senior Economist in the European Department. The author thanks Jacques Artus, Donogh McDonald, Massimo Russo, and Thomas Wolf for helpful comments, and Balazs Horvath and Susan Becker for technical assistance.

For the purposes of this study, Eastern Europe includes Bulgaria, Czechoslovakia, Hungary, Poland, and Romania.

A similar approach applied to east Germany was used by McDonald and Thumann (1990).

On which data are, in any case, imperfect.

For details, see Boote (1992). Briefly, the assumptions are as follows: cr (elasticity of substitution between capital and labor services) = 0.5; f(elasticity of labor services with respect to the capital-output ratio) = 0.5: and the labor share in net domestic product = 0.7. 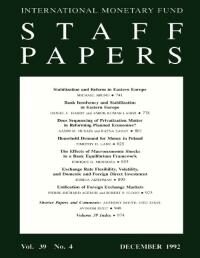