Jump to Content Jump to Main Navigation
Comments The Derivation of the Liquidity Ratio in the EMS Comment on Kremers and Lane
Author: IVO J.M. ARNOLD

Kremers and lane (1990) analyze the money demand in the European Monetary System (EMS) over the period 1978–87. They conclude that aggregate demand for Ml in countries participating in the Exchange Rate Mechanism (ERM) is a stable function of income, inflation, interest rates, and the ECU-U.S. dollar exchange rate. Therefore, a European central bank might be able to implement monetary policy more effectively than the individual central banks.

In this comment, I claim that Kremers and Lane made two errors in the derivation of their aggregate data. The first concerns the use of purchasing power parity (PPP) exchange rates. The second has to do with the procedure that has to be followed in aggregating and deflating data. I then assess the sensitivity of Kremers and Lane’s cointegration results to the questions I raise.

When estimating an ERM-wide money demand function, one has to find ways to convert national data in one currency. Kremers and Lane consider three methods. The first method uses current exchange rates.

In a system of fully floating exchange rates with large swings in the exchange rate, this method would cause equally large and undesirable swings in constructed aggregates. In a system like the EMS, this has not been much of a problem. In the second approach, which uses fixed base-period exchange rates, the measurement of aggregates is not influenced by nominal exchange rate fluctuations. This is a disadvantage when inflation differentials are large. The third method uses PPP exchange rates, which implies that national data are converted in proportion to the purchasing power of the national currency. The weight of each country in the aggregate thus reflects the size of the real economy. Because of this attractive property, Kremers and Lane prefer the PPP approach.

In Figure 1. I present the results of my own calculations, which show that for nominal money the PPP aggregate lies far below the base-period aggregate and somewhat below the aggregate derived with current rates.1 This is in line with what one expects in an exchange rate system where realignments (partly) compensate inflation differentials. The PPP aggregates in the paper by Kremers and Lane must be incorrectly calculated.

My second comment concerns the procedure that has to be followed in aggregating and deflating national data. The discussion will be restricted to aggregation using PPP rates.

As long as the right exchange rates and deflators are used, it doesn’t matter whether one first equalizes purchasing power across countries or through time. The conversion into deutsche mark of nominal national series using contemporaneous PPP rates and subsequent deflation using a German deflator yields the same result as the conversion into deutsche mark of real national series using a fixed PPP exchange rate of the base-year of the price indices (see the Appendix for a more formal discussion).

Figure 2 shows a comparison of the following three measures of the log of the ERM-wide liquidity ratio during the period 1978–87: (1) MPY: the original series used by Kremers and Lane; (2) MPY’: my reconstruction of (1). First, national series for nominal money and real income are aggregated using PPP rates. The aggregate nominal money series is subsequently deflated, yielding an aggregate real money series. The deflator is computed as a weighted average of national consumer price indices (CPIs), the weights being GNP/GDP shares based on PPP rates (see OECD (1991)). Finally MPY’ is calculated as the log of the quotient of the aggregated real income and real money series.3

(3) MPYN, the third measure, was obtained by first aggregating national series for nominal income and nominal money using PPP rates and then taking the log of the quotient of these two series. This is the correct procedure.

New estimates of equations (1) and (2) from Kremers and Lane’s paper are presented in Tables 1 and 2, respectively, along with the original estimates.4 Table 1 shows estimates for the level regression using the three different measures for the liquidity ratio discussed above. Table 2 presents the corresponding error-correction regressions.5 It can be seen that coefficients and t-values vary considerably across equations, the coefficients for RS, DY, and DRS3 being insignificant at a 5 percent level in the new equations. Furthermore, the standard errors of the new equations are much larger than for the original equations.

The claim, made by Kremers and Lane, that European money demand is stable, is based on questionable treatment of the data. Re-estimating the original specifications using a better series for the liquidity ratio results in a large decrease in almost all t-values and a significant increase in standard errors of the equation. This new evidence provides no support for Kremers and Lane’s claim to have identified a stable European money demand.

Specializing to a two-country case, consider two ways to derive an aggregate deflated series of some nominal variable, X:

It can easily be seen that both methods are equivalent if the definition of PPP rates is substituted in (ii):

Ivo J.M. Arnold is an Assistant Professor in the Department of Monetary Economics at Erasmus University, Rotterdam.

The author wishes to thank Jeroen J.M. Kremers for providing the aggregate series used in this paper, and Eduard Bomhoff and Dave Smant for useful comments.

I use the nominal money series as an example. The money series are taken from the International Financial Statistics (IFS) datatape (line 34b). I obtained quarterly PPP exchange rates by linear interpolation of the yearly OECD (1991) data. All other data are as in Kremers and Lane.

This error should be distinguished from the other error in the use of PPP rates, discussed in Section I.

In footnote 18 in Kremers and Lane (1990, p. 794), the aggregate price level is defined as a four-quarter moving geometric average of ERM-wide CPI. I assume, in conformity with their Figure 3 (p. 788), that this definition applies only to the inflation variable in their equation (1) and not to the price level appearing in (1) as a deflator of nominal money.

Nominal Money in the ERM

Alternative Measures of the Liquidity Ratio 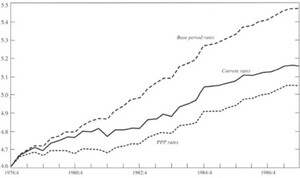 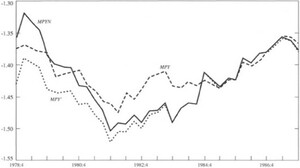