Trade liberalization in developing countries is frequently opposed on the grounds that, because it is likely to cause a deterioration in the external balance, it may not be a viable policy option for countries facing foreign exchange constraints. Recent literature suggests, however, an ambiguous relationship between tariff changes and the current account. This paper shows that if liberalization involves reducing tariffs on imported intermediate inputs (a reform that has figured prominently in developing countries), then the current account may improve or deteriorate, depending on the level of initial trade distortions and the structure of the economy.[JEL F13, F32, F41]

Trade liberalization in developing countries is frequently opposed on the grounds that, because it is likely to cause a deterioration in the external balance, it may not be a viable policy option for countries facing foreign exchange constraints. Recent literature suggests, however, an ambiguous relationship between tariff changes and the current account. This paper shows that if liberalization involves reducing tariffs on imported intermediate inputs (a reform that has figured prominently in developing countries), then the current account may improve or deteriorate, depending on the level of initial trade distortions and the structure of the economy.[JEL F13, F32, F41]

In recent paper, Bayoumi (1991) undertakes a macroeconomic analysis of recent reforms to U.K. local authority finance. In Section I he gives an admirably clear description of the reforms. However, for reasons given below, his empirical analysis of the impact of the change is flawed, and so the results should be treated with some caution. This note describes an alternative way of modeling local authority expenditure decisions that yields different estimates of the likely impact of the reforms.

Bayoumi’s analysis is based on the insight that the marginal price to the domestic sector of local authority expenditure is proportional to the per capita domestic tax base—or ratable value—in an area. This arises, it is claimed, because of the system of central government grants-in-aid in force in England until the 1990 reforms. Certainly, subject to certain reservations w e set out below, this result is true for the years up to 1988/89. However, the fiscal year 1989/90 studied by Bayoumi was anomalous. In that year the Government chose to abandon the matching element of grants-in-aid implicit in the kinked budget constraints described by Bayoumi. Instead, to facilitate transition to the reformed system in 1990, it converted the grant to a lump sum. This had the effect of dramatically altering the marginal price of extra spending in most local authorities. The entire burden of all extra spending was borne by local ratepayers. The portion borne by the residential sector was therefore indicated by the proportion of total ratable value in the domestic sector. It is consequently this proportion that should be used as an index of price in any econometric study of budgeting in 1989/90.

In an examination of the years preceding 1989/90, the kink in the budget constraint shown in Bayoumi’s Figure 1 (Bayoumi (1991, p. 219)) gives rise to a problem. For spending above the kink, the marginal price was increased by 25 percent. In 1988/89, for example, 17 of the 107 major authorities chose expenditure levels above the kink. Any econometric results are therefore derived from a jumble of at least two classes of authority facing different prices, for which modeling by ordinary least squares regression is inappropriate. An alternative procedure more suitable for modeling nonlinear budget constraints is described by Barnett, Levaggi, and Smith (forthcoming, 1992).

However, in 1989/90 the lump-sum nature of the grant removed the kink from the budget constraint. Unusually, therefore, ordinary least squares, as used by Bayoumi, is appropriate for the year studied, but the revised index of price described above is required.

Furthermore, an important implication of the reforms is that, as well as resulting in a change in the price of additional expenditure (the slope of the budget constraint), they also have important implications for the magnitude of the lump-sum element of grant. Under the previous system (before 1989/90), there was an implicit lump-sum grant of magnitude OM along the first segment of the budget constraint Mab, as shown in Figure 1. The remaining subsidy to the domestic sector was made up from two sources: the matching element implicit in the government grant system, and the matching subsidy implicit in the nondomestic property taxation.

Subsequent work (Barnett, Levaggi, and Smith (forthcoming, 1992)) has sought to model this situation in a more complete way than that described by Bayoumi. Fundamental to the analysis is a utility function of the sort

where Xi is per capita expenditure—a proxy for local services—and ti is per adult local taxation in locality Barnett, Levaggi, and Smith chose to employ a Stone-Geary utility function of the form

where a1i is some measure of per adult income available for local taxation, a2i is a measure of baseline needs, and β is a parameter reflecting preferences between local government expenditure and local taxes. Any linear segment of the budget constraint can be written as

where Mi is the per capita lump-sum grant implicit in the segment (the intercept with the vertical axis), and Pi is the marginal price, as discussed above. Maximizing (3), subject to (2), yields the following expression for demand for expenditure along the linear budget constraint:

The variables Xi, Pi, and Mi in equation (4) can be observed in each locality. Barnett, Levaggi, and Smith developed a proxy for local income a1i and assume that can be modeled by a normal distribution N(2, σ22). To maintain consistency with Bayoumi, we report results for 1989/90, which have not been reported elsewhere (see Barnett, Levaggi, and Smith (1991a) for results from earlier years). The 12 inner London boroughs are omitted from the analysis, because 6 of them had their budgets constrained by the Government in the year to be examined, and 1 was an outlier. For the 95 remaining authorities, the budget constraint can be represented by a single segment, and ordinary-least-squares regression is appropriate. It was found unnecessary to introduce any dummy variables, and the parameter 2 is insignificantly different from zero. As a result, the constant term is constrained to zero, yielding the following model, with standard error in parentheses:

Because of the revised basis of equalization and the nationalization of the business rate, the effective lump-sum grant under the reformed system (including business taxation) is in general larger than OM. This is illustrated by the line M’d in Figure 1, which represents the new budget constraint. The distance OM’indicates the new effective lump-sum grant (including entitlement to the national business rates). The reformed price is given by the ratio of total to adult population. Inserting these new values into the model estimated above yields an estimated drop in expenditure of 3.61 percent, a larger impact of the new system than that projected by Bayoumi.

Since Bayoumi’s paper was written, the Government has announced its intention to abandon the community charge. It is to be replaced by a revised form of property taxation (U.K. Central Government (1991)). The main reason for the failure of the tax was almost certainly the fact that its flat-rate nature offended many citizens’ concept of fairness. However, preliminary empirical analysis also suggests that the tax did not, in its first year, succeed in arresting the rise in local government expenditure (Barnett, Levaggi, and Smith (1991b)). We shall have to await more detailed analysis to develop an understanding of why the tax was failing to secure its macroeconomic objectives.

Richard R. Barnett is Professor of Public Finance and Management in the Department of Public Administration and Legal Studies, University of Ulster.

Peter Smith is a lecturer in the Department of Economics and Related Studies University of York.

This work was supported in part by a grant from the Economic and Social Research Council, reference R000231616. 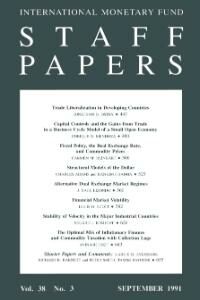 The Budget Constraint Under the Two Systems of Local Finance 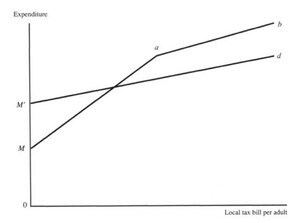