Staff Papers draws on IMF Working Papers, which are research studies by members of the Fund’s staff. A list of Working Papers issued in 1989:2 follows; additions will be noted in future issues.

Staff Papers draws on IMF Working Papers, which are research studies by members of the Fund’s staff. A list of Working Papers issued in 1989:2 follows; additions will be noted in future issues.

“Currency Switch and the Choice of an International Reserve Currency,” by Harry Delias [89/27]

“Government Purchases and Relative Prices in a Two-Country World,” by Jonathan D. Ostry [89/28]

“The Linkage Between Speculative Attack and Target Zone Models of Exchange Rates,” by Robert P. Flood and Peter M. Garber [89/30]

“Structural Determinants of the Natural Rate of Unemployment in Canada,” by David T. Coe [89/31]

“A Model of Adjustment and Growth: An Empirical Analysis,” by Carmen M. Reinhart [89/32]

“Real Exchange Rate and Output Variability: The Role of Sticky Prices,” by Bankim Chadha [89/35] “Gaining Policy Credibility in the EMS: The Case of Ireland,” by Jeroen J.M. Kremers [89/36]

“Balance of Payments Crises and the Structure of Adjustment Policies,” by Michael Frenkel and Martin Klein [89/37]

“Optimal Taxation Policies in the EMS: A Two-Country Model of Public Finance,” by Carlos A. Vegh and Pablo E. Guidotti [89/40]

“European Financial Integration and Revenue from Seigniorage: The Case of Italy,” by Lazaros Molho [89/41]

“An Economic Analysis of Tax Amnesties,” by Peter Stella [89/42]

“International Spillovers of Taxation,” by Jacob A. Frenkel, Assaf Razin, and Steven Symansky [89/43]

“Indexation and Maturity of Government Bonds: A Simple Model,” by Guillermo A, Calvo and Pablo E. Guidotti [89/46]

“From Deficit Delusion to the Fiscal Balance Rule: Looking for an Economically Meaningful Way to Assess Fiscal Policy,” by Laurence J. Kotlikoff [89/50]

“Private Consumption and Saving: The Cases of Mexico and Chile,” by A. Gomez-Oliver [89/51]

“The Purchasing-Power-Parity Criterion for Stabilizing Exchange Rates,” by Kenichi Ohno [89/52]

A limited supply of IMF Working Papers is available free of charge to interested scholars and research institutions. In requesting a particular paper (or papers), please indicate the Working Paper number (for example, WP/89/1), title, and author(s). Requests should be made to:

NEW FROM THE INTERNATIONAL MONETARY FUND

Macroeconomic Policies in an Interdependent World

This volume, a collection of papers delivered at a December 1988 conference in Washington, examines the theoretical basis for, and practice of, macroeconomic policy coordination. It represents the findings of various econometric models and examines interdependence in the context of European integration plans and North-South relations. The conference was cosponsored by The Brookings Institution, The Centre for Economic Policy Research, and the international Monetary Fund.

Settling Defaults in the Era of Bond Finance

Imports under a Foreign Exchange Constraint

dots (…) indicate that data are not available;

a dash (—) indicates that the figure is zero or less than half the final digit shown, or that the item does not exist;

a comma (’) separates thousands and millions;

a colon (:) is used between a year and the number indicating a quarter within that year (for example, 1989:2);

components of tables may not add to totals shown because of rounding. 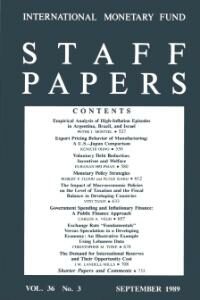