Staff Papers draws on IMF Working Papers, which are research studies by members of the Fund’s staff. A list of Working Papers issued in 1988 follows; additions will be noted in future issues.

Staff Papers draws on IMF Working Papers, which are research studies by members of the Fund’s staff. A list of Working Papers issued in 1988 follows; additions will be noted in future issues.

“The Impact of Agricultural Support Policies in the United States and Other Major Countries: A Survey,” by Owen Evans [88/1]

“The Balance of Trade, the Terms of Trade, and the Real Exchange Rate: An Intertemporal Optimizing Framework,” by Jonathan Ostry [88/2]

“Financial Reform and Monetary Control in Indonesia,” by V. Sundararajan and Lazaros Molho [88/4]

“The Effects of Currency Substitution on the Response of the Current Account to Supply Shocks,” by Carlos Vegh [88/5]

“Change of Ownership and Time of Recording in the National Accounts,” by Robert A. McColl [88/6]

“The Role of the Public Sector in the Market Economies of Developing Asia: General Lessons for the Current Debt Strategy,” by Vito Tanzi [88/7]

“The Debt-Equity Composition of International Investment,” by S. Ramachandran [88/8]

“On the Statistical Properties of Floating Exchange Rates: A Reassessment of Recent Experience and Literature,” by Shinji Takagi [88/11]

“The Growth of Government Expenditure: A Review of Quantitative Analysis,” by Jack Diamond and Alan A. Tait [88/17]

“The Case for Earmarked Taxes: Theory and an Example,” by Ranjit Teja [88/18]

“The Strategy of Debt Buy-Backs: A Theoretical Analysis of the Competitive Case,” by Carlos Alfredo Rodriguez [88/20]

“Stabilization and Growth in an Open Islamic Economy,” by Abbas Mirakhor and Iqbal Zaidt [88/22]

“The Relative Impact of Income and Consumption Taxes,” by Hirofumi Shibata [88/24]

“Urban and Rural Household Savings in China,” by Yingyi Oian [88/25]

“The Fiscal Role of Price Stabilization Funds: The Case of Cote d’Ivoire,” by Christian Schiller [88/26]

“Controlling Inflation: The Problem of Non-Indexed Debt,” by Guillermo A. Calvo [88/29]

“The Simple Analytics of Debt-Equity Swaps and Debt Forgiveness,” by Elhanan Helpman [88/30]

“The Incidence and Efficiency Costs of Corporate Taxation When Corporate and Noncorporate Firms Produce the Same Good,” by Jane G. Gravelle and Laurence J. Kotlikoff [88/32]

“Tax Policy and Business Investment in the United States: Evidence from the 1980s,” by Robert Corker, Owen Evans, and Lloyd Kenward [88/34]

“Debt and Conditionality Under Endogenous Terms of Trade Adjustment,” by Joshua Aizenman and Eduardo Borensztein [88/38]

“Balance of Payments Stabilization Policies in the Dependent Economy and Their Short-Run Impact on Economic Activity,” by Henri Lorie [88/44]

“The International Monetary System: Developments and Prospects,” by Jacob A. Frenkel and Morris Goldstein [88/45]

“How Resilient Are Military Expenditures in the Context of Fund-Supported Programs?” by Paula De Masi and Henri Lorie [88/48]

“Dynamics of Asian Savings: The Role of Growth and Age Structure,” by Ashok K. Lahiri [88/49]

“The Implications of Fiscal Conditions and Growing Internationalization for Monetary Policies and Financial Market Conditions,” by Peter Isard [88/52]

“The International Coordination of Economic Policies: Scope, Methods, and Effects,” by Jacob A. Frenkel, Morris Goldstein, and Paul Masson [88/53]

“Theoretical Aspects of Growth in Developing Countries: External Debt Dynamics and the Role of Human Capital,” by Ichiro Otani and Delano Villanueva [88/54]

“The Impact of Macroeconomic Policies on Income Distribution: An Empirical Study.” by Mario I. Blejer and Isabel Guerrero [88/57]

“Fiscal Restraint, Demographic Change and Social Services in Israel, 1985-87, and Application of the Methodology to Latin America,” by Yaakov Kop [88/58]

“Input Controls in the Public Sector: What Does Economic Theory Offer?” by David B. Heymann [88/59]

“International Effects of Tax Reforms,” by Jacob A. Frenkel and Assaf Razin [88/62]

“Agricultural Trade and Protection in Asia,” by Dean A. DeRosa [88/63]

“Issues in the Design of Growth Exercises,” by Ernesto Hernandez-Cata [88/65]

“Determinants of the Spread in a Two-Tier Foreign Exchange Market,” by Robert P. Flood and Nancy Marion [88/67]

“Empirical Analysis of High-Inflation Episodes in Argentina, Brazil, and Israel,” by Peter Montiel [88/68]

“International Coordination of Fiscal Policies: A Review of Some Major Issues,” by Vito Tanzi [88/70]

“Economic Interdependence and the International Implications of Supply-Side Policies,” by Vito Tanzi and A. Lans Bovenberg [88/71]

“Macroeconomic Interdependence under Capital Controls: A Two-Country Model of Dual Exchange Rates,” by Pablo E. Guidotti and Carlos A. Végh [88/74]

“Capital Mobility and Monetary Policy in Colombia,” by Robert Rennhack and Guillermo Mondino [88/77]

“Economic Structure, the Exchange Rate, and Adjustment in the Federal Republic of Germany: A General Equilibrium Approach,” by Thomas Mayer [88/79]

“The Potential Role of the SDR in Diversified Currency Portfolios of Central Banks,” by Carlos Medeiros and Simon Nocera [88/81]

“A Working Model of Slump and Recovery from Disturbances to Capital-Goods Demand in a Closed Non-Monetary Economy,” by Edmund S. Phelps [88/82]

“Pension Policies in the OECD Countries: Background and Trends,” by Robert Holzmann [88/85]

“Commodity Prices as a Leading Indicator of Inflation,” by James M. Boughton and William Branson [88/87]

“The ‘Gulliver Effect’ and the ‘Optimal Divergence’ Approach to Trade Policies: The Case of Nepal,” by Mario I. Blejer and Gyorgy Szapary [88/92]

“A Note on the Public Choice Approach to the Growth in the Government Expenditure,” by Jack Diamond [88/93]

“The Impact of Macroeconomic Policies on the Level of Taxation (and on the Fiscal Balance) in Developing Countries,” by Vito Tanzi [88/95]

“Ricardian Equivalence and National Saving in the United States,” by Liam P. Ebrill and Owen Evans [88/96]

“Government Spending and Inflationary Finance: A Public Finance Approach,” by Carlos A. Vegh [88/98]

“Trade Policy and Macroeconomic Balance in the World Economy,” by W. Max Corden [88/101]

“The Fiscal Implications of Trade Liberalization,” by Mario I. Blejer and Adrienne Cheasty [88/102]

“Commodity Markets and the International Transmission of Fiscal Shocks,” by Carmen M. Reinhart [88/104]

“The Demand for International Reserves and Their Opportunity Cost,” by J.M. Landell-Mills [88/105]

“An Analysis of Reserve Tranche Positions and Their Use,” by Samir Fawzi [88/107]

“Exchange Rate ‘Fundamentals’ Versus Speculation: The Case of Lebanon,” by Christopher M. Towe [88/109]

“Tax Policy and National Savings in the United States: A Survey,” by A. Lans Bovenberg [88/110]

“Equilibrium in a Non-Interest Open Economy,” by Abbas Mirakhor [88/111]

“Are All Summary Indicators of the Stance of Fiscal Policy Misleading?” by G.A. Mackenzie [88/112]

“Model Uncertainty, Learning, and the Gains from Coordination,” by Paul Masson and Atish R. Ghosh [88/114]

“Optimal Intertemporal Taxation on Consumption and the Term Structure of Government Debt,” by Howell H. Zee [88/115]

A limited supply of IMF Working Papers is available free of charge to interested scholars and research institutions. In requesting a particular paper (or papers), please indicate the Working Paper number (for example. WP/88/1). title, and author(s). Requests should be made to: 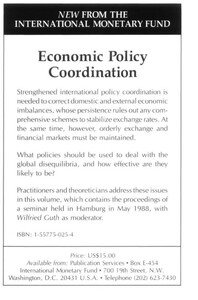 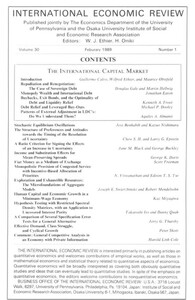