WILLIAM. white, who joined the International Monetary Fund in 1948, spent his entire professional life in the Research Department. Present and past staff members, many of whom benefited from his advice, have asked that his contribution-to the work of the Fund should receive recognition in Staff Papers. This appreciation draws on excerpts from written recollections of some of his colleagues.

WILLIAM. white, who joined the International Monetary Fund in 1948, spent his entire professional life in the Research Department. Present and past staff members, many of whom benefited from his advice, have asked that his contribution-to the work of the Fund should receive recognition in Staff Papers. This appreciation draws on excerpts from written recollections of some of his colleagues.

William H. White joined the International Monetary Fund in its early days, in 1948, and spent his entire professional life in the Fund’s Research Department. Present and past staff members, many of whom benefited from his advice, have asked that his contribution to the work of the Fund receive recognition in Staff Papers. This appreciation draws on excerpts from written recollections of some of his colleagues and includes a selected bibliography of his work in monetary economics.

Monetary policy is among the indirect policy instruments that are increasingly being relied upon in China as a result of the process of economic reform launched in 1979. Previously, the main function of monetary policy was to support the implementation of the central plan while maintaining financial stability. Credit was granted whenever it was deemed necessary for plan implementation, and the monetary authorities monitored the various uses of the liquidity thus created. They especially focused on the volume of cash in circulation, since in the Chinese economy cash was the only means of payment that was not administratively controllable.

The ongoing reforms, however, are now giving various agents in the economy greater material incentives to organize their activities so as to supply goods and services in response to demand rather than in response to centralized planning directives. The banking system is being reformed to support this process. The paper explains how the monetary authorities are being given greater responsibility for ensuring macroeconomic balance and how credit policy is being assigned the role of stimulating greater efficiency in resource allocation. The reform of the banking structure and the development of monetary policy instruments supporting these new responsibilities of the banking sector are discussed, and the implications of these developments for the targets of monetary policy are examined. Monetary developments in the 1979–85 period and the enhanced scope for financial intermediation are briefly described. The paper concludes that, although much progress has been made in monetary reform, the full benefit of the automaticity of monetary policies will be obtained only gradually and in tune with reforms of the whole economic system, in particular of the price system,

Inflation magnifies the distorting effect of taxes on the allocation of resources through the credit market. Distortions arise because of the difference between the after-tax real return to lenders and the real cost to borrowers. These distortions could be avoided by indexing to inflation the taxation of interest and investment income and of deductible interest expense. Although a number of earlier discussions concluded that such indexing would decrease the fiscal deficit, the present paper shows that, under the assumptions used in the analysis, indexing would increase the size of the deficit.

This difference in results is attributable to differences in assumptions. Some earlier studies explored the effects of inflation on interest rates under the assumption that inflationary investment returns are not taxed; in contrast, the present paper assumes that at least some inflationary investment returns, such as realized capital gains, are taxed. Some earlier studies specified that government deficits are financed at a before-tax interest rate, under the assumption that there is no feedback from government interest payments to government revenues. The present paper specifies, instead, that such deficits are financed at an after-tax rate, since government revenues are assumed to be increased by tax receipts on government interest payments to the public.

The procedure adopted is to organize the discussion of exchange rate policies in developing countries by using a single, integrated framework, an approach widely regarded as appropriate for analyzing an economy in which quantitative adjustments tend to be more important in the short term than are price adjustments. In the model, sometimes called the “dependent economy model” to emphasize that the country is assumed to be a price taker in the world market for importables and exportables alike, industries are conceptually divided into tradables and nontradables sectors. This distinction makes it possible, in turn, to distinguish between the effects of aggregate and relative disturbances, as well as between those of internal and external disturbances. The model examines an economy characterized by wage and price rigidity and takes into account the effect that rationing of consumers and producers in this economy has on their demands and supplies in other markets.

The analysis shows that the short-run effects of currency depreciation depend critically on whether the labor and output markets are in equilibrium. In contrast to the implication of the elasticities approach—that a currency depreciation improves the trade balance of a small open economy—the analysis shows that in some disequilibrium states a depreciation can negatively affect the trade balance. Furthermore, including credit rationing and imported intermediate goods in the model shows that the contractionary effects of devaluation on the supply side of the economy have important implications for macroeconomic equilibrium and full employment. Hence, analysis of the balance of payments must be integrated into broader macroeconomic analysis of the economy, and a currency depreciation is most useful not in isolation but as part of an integrated policy package.

In the context of the continuing debate on Fund conditionality, many researchers both inside and outside the Fund have attempted to estimate the effects of Fund programs through the use of multicountry samples. A key challenge in such work is to estimate the counterfactual—that is, what would have happened in program countries in the absence of Fund programs.

Both approaches are subject to potentially serious statistical problems. Because the problems associated with the control-group approach are less well known (at least in the context of evaluating Fund programs), the paper focuses on the potential sources of bias in this methodology. In particular, the paper shows that, unless the program group is randomly selected, observed outcomes in the control group may be systematically different from what would have happened in the program-country group in the absence of programs. Further, there are good a priori reasons for believing that the assignment of countries to program and nonprogram groups is not random. The paper presents some empirical evidence, drawn from the experience of the 1970s, to support this view. Estimates of program effects that control for observable preprogram differences between program and nonprogram countries turn out to be quite different from those that do not control for these differences. Application of the control-group methodology to multicountry samples therefore requires the removal of “sample-selectivity bias,” which can arise from a variety of sources. On a broader level, the paper demonstrates that considerable caution is needed in attempting to estimate and interpret the effects of Fund programs by using multicountry data.

This paper examines the linkage between economic developments in industrial economies and the economic performance of six Asian countries. A simple model is constructed to investigate these links, with particular emphasis on developments in the Asian countries’ external positions and their domestic growth and absorption. Unlike earlier studies, the paper explicitly examines the role of policy adjustments in the Asian countries to offset any deterioration in their current accounts associated with slower growth in the industrial countries.

The model is used to simulate the outcomes for 1985 and 1986 in the six Asian countries under a high-growth scenario (in which industrial country growth is maintained at its 1984 rate of about 5 percent) and a low-growth scenario (in which industrial country growth is about 3 percent). The simulation results provide answers to three questions: How much has the reduction in export market growth weakened the current account position of developing countries and thereby enlarged debt and the debt service burden? Have the negative effects of slower industrial country growth been mitigated by the simultaneous drop in interest rates? To what extent has the tightening of policies in the Asian countries contributed to containing the current account effects of slower export market growth, and at what cost in terms of forgone growth of output and domestic expenditure?

The simulation results indicate that, given the actual degree of restrictiveness of demand management policies in the Asian countries, the slowdown in industrial country growth, together with the easing of U.S. interest rates and changes in exchange rates and inflation in industrial countries, accounted for a worsening in the current account position of the six Asian countries by US$1 billion (0.3 percent of gross national product, GNP) in 1985 and by about $4 billion (0,7 percent of GNP) in 1986 relative to the outcome with the same policy stance but with higher industrial country growth. Correspondingly, the changes accounted for a drop in GNP growth in the Asian countries of about half a percentage point both in 1985 and in 1986. Although lower interest rates initially improved the debt service ratio by almost 1 percentage point relative to the high-growth scenario, this improvement is found to erode by 1986 under the higher level of debt associated with larger current account deficits. Thus, by 1986 the debt service ratio would be identical in both the high-growth and the low-growth scenarios, The simulations show that a tightening of the Asian countries’ demand management policies helped contain the deterioration in their current account positions, but at a substantial cost in expenditure growth forgone. 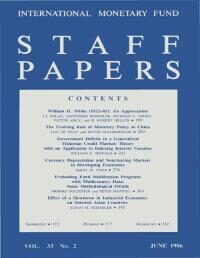