Jump to Content Jump to Main Navigation
A Note on Heller’s Use of Regression Analysis
Author: ALAN RABIN and LEILA J. PRATT

This note attempts to show that Robert Heller’s use of regression analysis in his important 1976 article, “International Reserves and World-Wide Inflation,” is inadequate. Heller’s study supposedly indicates that over the long run (1951–74), changes in global international reserves had a significant impact on the aggregate world money supply. Our study concludes that there are serious limitations in the use of regression analysis to illustrate this relationship.

Heller regressed changes in the world money supply on changes in world international reserves for the period 1951 to 1974. The following are Heller’s results, which were corrected for autocorrelation: 1

As can be observed from equation (1), Heller found that current and lagged international reserves expressed in U. S. dollars can account for 57 per cent of the variation in the world money supply. He concludes that “the evidence examined shows that changes in global international reserves have a significant impact on the aggregate world money supply.” 2

Heller’s data are portrayed graphically in Charts 1 and 2. Close observation reveals that large deviations from the trend occurred in both Rt and Mt during the early 1970s. Since such large deviations may tend to bias the results obtained using ordinary least squares, we ran Heller’s regressions for the period 1951 to 1969, omitting the period (1970–74) of extreme departure from the trend. The following are our results, which were corrected for autocorrelation:

As can be seen in equations (3) and (4), there is little if any relationship between the percentage change in world money supply and the percentage change in international reserves. These results support the findings of Henry Goldstein (1972), who used regression analysis and found that virtually no association whatsoever can be discerned between quarterly increments in money supply and quarterly changes in external reserves for any of six countries (Belgium, the Netherlands, the Federal Republic of Germany, France, Italy, and Japan) for a period of 52 quarters ending in 1971. 3

Although Heller is aware of the problems in using regression analysis, he casually dismisses these limitations:

It should also be borne in mind that the use of least-squares regression techniques gives considerable weight to large deviation from the trend, such as occurred in the early 1970s in all the variables studied. One might therefore argue that the use of these techniques gives an undue weight to one historic episode. On the other hand, it is evident that substantial changes in the relevant variables deserve the particular attention of economists and policymakers alike. Fractional changes in any of the variables studied are of relatively little consequence—especially when one considers the inherent deficiencies in the global aggregates analyzed here. One might therefore want to consider the increased emphasis given to large deviations from the trend by the use of regression techniques as entirely appropriate under the circumstances. 4

We strongly disagree with Heller’s interpretation of his regressions. As we showed, the large deviations from trend do indeed severely bias his results. By omitting the period of extreme departure from trend, we demonstrated that there is little correlation between changes in global money and changes in international reserves. If anything, the regression analysis can be used to show lack of correlation for the period 1951–69. However, it most certainly should not be used to establish correlation over the entire period, 1951–74.

Professors, University of Tennessee at Chattanooga.

Ibid., p. 84. Heller’s regressions were significant at the 5 per cent level. 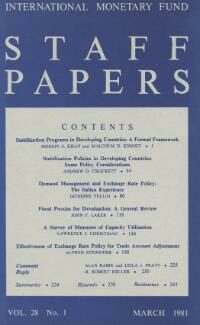 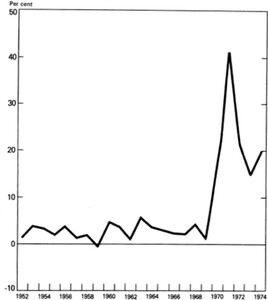 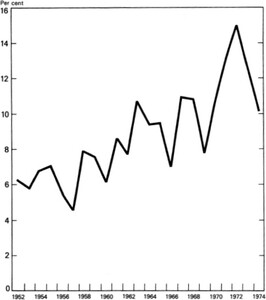