The pace of price inflation in Germany has recently accelerated strongly. In the case of industrial producer prices, the acceleration began with the first signs of a new upswing in the beginning of 1972. In earlier business cycles industrial producer prices showed a distinct pattern of at least slow rises, if not declines, during the downswing and even after the lowest point of the cycle was reached. Chart 1 shows the development of industrial producer prices during the cyclical downswings and at the beginning of upswings for the past three cycles. While the increase of the index of industrial producer prices during the downswing of the earlier two cycles, which lasted for over two years, amounted to about 2 percent, the increase in the last cycle, which was of a similar length, was of the magnitude of 8 per cent. Consumer prices rose at an annual rate of about 5 per cent in the first half of 1972 and then accelerated in the second half to an annual increase of about 8 per cent. Since the cost of living index plays a great role in public opinion and in the price expectations of the public, price development became a major concern for economic policy.

Analysis of price inflation has recently focused increasingly on the role of price expectations in influencing the rate of inflation. A general view has emerged that when the rate of expected price increases is high the implementation of effective stabilization policies becomes much more difficult.1 Accelerating price expectations could lead to higher wage demands to compensate for the anticipated price increases; and also in such a situation, it is much easier for enterprises to raise prices (even in the absence of excessive demand pressures). By the operation of such a mechanism, price expectations might have an impact on actual price behavior.

I. Quantification of Price Expectations

Price expectations are not directly observable, but a great deal of qualitative information is available.2 German businessmen in industry 3 (in common with their counterparts in other countries of the European Economic Community) are asked on a regular basis whether they expect that their selling price will rise, stay about the same, or fall during the next three to four months.4 The results of such surveys are recorded as:

In order to make these results useful for obtaining a time series of expected prices, a method of quantifying these qualitative data has been developed.5

(1) Each individual asked in the survey has a subjective probability function over the expected price change. It may vary across individuals and over time.

(2) If the expected price change is within a certain interval (—s, +s), the individuals will answer that they expect prices will stay about the same.

(3) Since the number of individuals asked is large, the expected rate of price change over all individuals can be assumed as normally distributed (Chart 2).

Under above assumptions, a (the per cent of people answering that they expect prices will rise) is equal to the probability that the random variable “expected rate of price change” (X) takes a value greater than s:

where Fx(s) is the value of the distribution function of the random variable (X) for the argument(s).

Chart 3 shows the results of the quantification of the qualitative data as given in Results of the Business Survey Carried Out Among Heads of Enterprises in the Community (s is assumed to equal 2). The expected rate of price change of industrial producer prices is an annual rate of change, comparing quarters with the same quarters in the preceding year. In short, price expectations are shown to have a clear cyclical pattern and recently started to accelerate.

Several hypotheses for expectations were tested. In general, it was assumed that expectations for the future depend on past experience.

is the expected rate of price increase for period (t+l), expressed at period t.

This hypothesis assumes that the price expectations depend on the actual rate of inflation in the past.

A modification of the hypothesis in equation (1) would be:

The hypothesis in equation (3) makes an adjustment for some form of learning process. If the expected and the actual rate of inflation were equal in the preceding period, it is assumed that no adjustment of price expectations is made. If the expected rate of inflation differed from the actual rate, then price expectations for the next period are corrected accordingly.

A modification of equation (3) is:

Besides the assumption that the expected rate of inflation depends on past actual rates, it seems plausible that the individuals also would take into account past and expected cost increases, as well as past and expected demand pressure, in the formation of their price expectations. Therefore, such variables were also included in the tests of the formation of price expectations.

The adaptive expectations hypotheses did not give satisfactory results. When past actual rates of inflation were used as the only explanatory variables, the hypothesis in equation (2) gave the best results:

When, in addition to past actual rates of inflation, cost and demand pressure variables were used as explanatory variables, the best results were given by equation (6):

where cut represents capacity utilization in manufacturing, in period t:

The Durbin-Watson statistics in equations (5a), (5b), and (6) are not satisfactory. This is probably partly due to the use of overlapping rates of change and to the operation of other factors that are difficult to quantify, that cannot be explained sufficiently by demand pressure and most recent price developments, and that influence price expectations. Chart 4 shows the results of equation (6) in graphic form. As can be seen, the equation overestimates price expectations considerably in 1966, when the beginning of a sharp economic downswing occurred, and underestimates price expectations systematically at the end of 1971 and 1972, when a mild downswing and the beginning of an economic upswing occurred.

In summary, it is evident that price expectations depend to a large degree on past experience, in particular on past rates of inflation and demand pressure (see equation (6)),

The next step in the analysis was to assess the impact of price expectations on actual price behavior. For this purpose, a price equation 8 for industrial producer prices was estimated:

The basic hypothesis on the price mechanism, as shown in equation (8), relates the rate of price increase to cost increases, demand pressure, and price expectations. It should be noted that the explanatory variables are probably not independent of each other; in particular, it is plain that cost increases are not independent of demand pressure. But experience shows that there is a lag between those variables and that the relationship is not constant. On the other hand, it has already been shown (see equation (6)) that price expectations depend on past demand pressures. The purpose of the estimation process is to show which of the variables best explain the actual price development.

The price equation was estimated with the stepwise regression program of the Fund’s data processing division. Several cost and demand pressure variables—lagged and current—and involving linear and nonlinear transformations were used in the estimation process.9

The price index for industrial producer prices, as published in German sources, includes the turnover tax up to 1968. From 1968 on, after the introduction of the value-added tax (VAT), the price index excludes VAT. Therefore, in order to take account of the break in the series, a dummy variable (D) was introduced. It has the value of one for each of the four quarters of 1968 and zero otherwise. The estimation period is from the first quarter of 1965 to the third quarter of 1972.

The results of the analysis can be summarized in two statements:

(1) There is empirical evidence that price expectations influence the actual rate of inflation (see equation (9));

(2) Price expectations depend to a large degree on past experience, on past rates of inflation, and demand pressures (see equation (6)),

This analysis suggests that the actual rate of inflation at any point in time depends directly on three principal and separable factors: (1) cost pressures, (2) the degree of capacity utilization, and (3) the rate of inflation experienced in the recent past through its effect on the formation of current price expectations. These conclusions, if valid, have important policy implications.

In a situation of accelerating inflation (the current situation in Germany), it may be very difficult to moderate the pace of inflation by applying demand management policies in conventional degree. For such policies it is unlikely to be sufficient, for example, to bring pressures on capacity down to some medium-term norm, because the analysis suggests that it is necessary not only to eliminate excess demand pressure but also to take additional action that will offset the inflationary pressure built up as a result of recorded past price performance. In other words, if demand management policy is being used, it has to be sufficient, inter alia, to break rising price expectations. The implication of this approach is that a “break” in such expectations may be achievable by demand management policies only at the cost of an unusually high degree of restrictiveness and an associated cost in unemployment.

However, the analysis suggests that, in a situation in which price expectations have been broken by such policies and the contemporary rate of inflation is thus acceptably moderate, it would be possible for unemployment to return to its earlier lower level, with restoration of demand management policies to the earlier single role of avoidance of excess demand pressure. In other words, very tight demand management policies in the short term may be a means of improving the unemployment-inflation trade-off in the medium term.

Another approach to the breaking of built-up price expectations would be the implementation of prices and incomes policies, possibly involving a wage-price freeze. Arguably, this approach could mitigate the degree of severity of restrictive demand management policies that would be required if inflationary expectations were to be broken by such measures alone, while offering a perhaps broadly similar prospect for an improvement in the unemployment-inflation trade-off in the medium term.

Mr. Knöbl, an economist in the Central European Division of the European Department, is a graduate of the Hochschule für Welthandel, Vienna, and was a scholar at the Institute for Advanced Studies and Scientific Research, Vienna.

This view has been variously expressed in the German Government’s Annual Economic Report, 1973, in the reports of the German Council of Economic Experts, and in the Deutsche Bundesbank’s Monthly Report (Frankfurt am Main), various issues.

The Directorate-General for Economic and Financial Affairs of the Commission of the European Community publishes the Report of the Results of the Business Surveys Carried Out Among Heads of Enterprises in the Community (Brussels).

The conduct of the surveys and the presentation of results are described in detail in: Commission of the European Community, The Harmonized Business Surveys in the Community: Principles and Methods (Brussels, November 1967).

The method was developed in collaboration with two Austrian colleagues. Details are given in Wilfrid Grätz and Adalbert Knöbl, “Erwartungswerte in der Ökonomie, Investitions- und Preiserwartungen, Quantifizierungsmethode,” Forschungsbericht, Nr. 70 (Institut für Höhere Studien, Vienna, July 1972). At about the same time, basically the same method was developed by J. S. Carlson and M. Parkin. The method was presented at the Fund by Mr. Parkin in September 1972.

Solow tested basically the same price equation for the United States and the United Kingdom, but he did not have an observed series of price expectations available. Therefore, pe was created by use of the adaptive expectations hypothesis. See R. M. Solow, Price Expectations and the Behavior of the Price Level, (Manchester University Press, 1969).

Germany: Development of Industrial Producer Prices During Three Cyclical Downswings and the Beginnings of Upswings

Germany: Density Function of Expected Rate of Price Changes Over All Individuals Asked 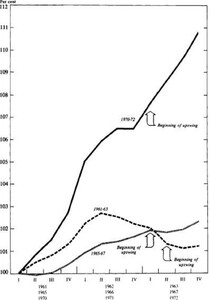 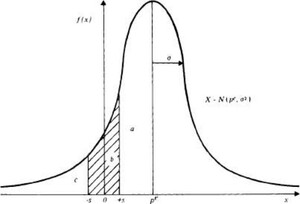 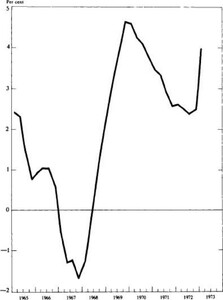 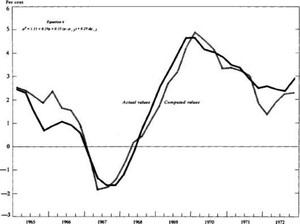 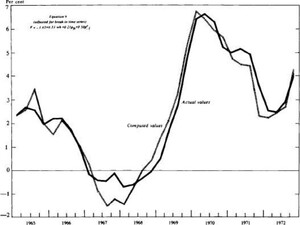 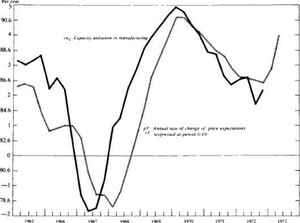