Jump to Content Jump to Main Navigation
A Brief for the Defense
Author: Robert Triffin

The main issue is not whether admittedly crude forecasts of future reserve deficiency are “unproven” or even "incorrect, at least for the next five or ten years” (paragraph 72). As to this too—to quote Mr. Altman—opinions may differ, and do indeed, as to whether it is wise to refuse to look five or ten years ahead, as he seems to argue in his concluding paragraphs.

The utter absurdity of such a “system”—if we can call it that—would, in comparison, lead me to prefer even the “mechanistic” 3 per cent annual increase in world reserves which Mr. Altman bizarrely, but obstinately, persists both in reading into my proposals (paragraphs 31, 35,42, 63, etc.) and in admitting that I never advocated it (Appendix I). I certainly would never have dreamed of applying it to such a short and abnormal period (1957–59) as that retained in his elaborate example (paragraphs 53–65), and in which reserve estimates were dominated and distorted by the Suez crisis, the writing off of $1.4 billion of EPU balances, the 50 per cent increase in capital subscriptions to the IMF, and large transfers of reserves from central banks to private banks following the restoration of convertibility. Using Mr. Altman’s own figures in his Table 4, but correcting them for the impact of this reshuffle in countries’ reserves, one will find that these increased by about 9.7 per cent over these three years, i.e., by more than 3 per cent a year, rather than the “less than 1 per cent a year” quoted by Mr. Altman at the end of his paragraph 57. The increase was even far larger, of course (more than 20 per cent over the three years), for countries other than the United States.

Mr. Altman’ s qualms about the long-term growth of Fund claims against net debtor countries (paragraphs 43 through 47) are, to my mind, the most solid argument in his paper. Yet, it is precisely the role of any banking system to channel loans from net creditors to net debtors, and to use relatively short-term liabilities for longer-term lending.

1. They are based on the most extreme and unrealistic assumptions conceivable as to members’ preference for sterile gold metal over interest-earning, gold-guaranteed Fund deposits, and as to the Fund’ s desire to liquidate at the maximum permissible pace its dollar and sterling investments;

2. They ignore—totally in his table, and with a mere passing nod in his text—my suggestions for indirect Fund lending to the less developed countries via the International Bank and traditional financial centers;

3. He conveniently forgets that the key currency countries have long assumed similar risks of borrowing short, from dollar and sterling holders, and lending long to net debtor countries. My proposals would transfer this function to the Fund in part, and in part diffuse it among a larger number of financial centers, but under conditions which would greatly decrease the risks of sudden conversions of the short-term claims of the ultimate creditors, either from one currency into another, or into gold metal.

There is much more that would need be said on this, but space does not permit it here. May I refer the reader to an excellent paper by Alexandre Lamfalussy, “La Liquidité du Système Montéaire International,” presented to the Société Royale d’Economie Politique de Belgique at a special colloquium, on April 22, 1961?

Mr. Altman’ s vehement objection against exchange rate guarantees on central banks’ dollar and sterling holdings are, of course, an argument in favor of letting the debtors of these obligations be free to write them down at any time through currency devaluation. I fail to see as much virtue as he does in such a system. If he is really confident that the key currencies will not be devalued, he should regard such guarantees as costless, and welcome them as an adjunct to confidence in the system and a means to discourage destabilizing flights from one key currency into another or into gold. His objections to the potential cost of such guarantees cannot but imply an expectation that the key currencies may in fact be devalued. But in this case, how can he feel confident that other countries will blandly continue to invest more than half of their international reserves in such exchange-risky assets? And, if they do not, how will he ward off the consequences upon the international monetary system and the key currencies themselves of those massive conversions into gold which scare him so much—and far less justifiably—with regard to the gold-guaranteed XIMF deposits?

Mr. Altman, himself, exorcises expertly in the last sentence of his paragraph 39 this bogy of excessive gold demands upon the XIMF, conjured up earlier in the same paragraph. He resurrects it, however, a few paragraphs later (44 and 50) on the basis of assumptions which he—as well as I—used for illustration but agreed to be totally unrealistic.

The confusion between (a) convertibility into any and all currencies needed for international settlement and (b) convertibility into gold hoards continues to lurk throughout his paper, and he sees no escape from a gold shortage except in either a “100 per cent gold reserve” system or complete inconvertibility into gold (paragraph 51). I leave it to him to reconcile this extreme pessimism with the facts of history, both with respect to the present functioning of the gold exchange standard—certainly far more vulnerable in this regard than the XIMF—and to the operation of national monetary systems under the old, nineteenth century gold standard.

Lack of space—and time—prevents me from delving further here into the formidable array of variegated objections spread throughout the 73 paragraphs of Mr. Altman’ s prosecution brief. Most of them could be applied, with equal or greater force, to the system which he wishes to maintain. I remain, however, deeply grateful to Mr. Altman for his searching criticism of my views. If it has not led me to abandon them, it has contributed to my understanding of the obstacles—psychological as well as other—to be surmounted, and of various ways in which my proposals could be amended in the course of the exploration and negotiations now under way regarding future reforms in the IMF structure and policies.

“Altman on Triffin: A Rebuttal,” Quarterly Review (Banca Nazionale del Lavoro), March 1961, and reproduced in the Hearings Before the Joint Economic Committee of the Congress of the United States (86th Congress, Second Session, December 7 and 8, 1960), pp. 208–17.

As for the “stabilizing” operations of the IMF over that period, they consisted nearly exclusively of dollar loans, thus aggravating further the over-all deficits of a country which was losing reserves on a scale unprecedented in world history. Drawings of surplus countries’ currencies remained practically insignificant until very recently. 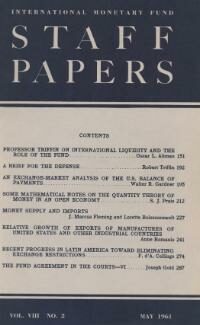