Hungary and Ukraine were among the first in a series of countries to approach the IMF about loans to help fend off the impact of the global financial crisis, which has triggered a worldwide economic downturn.

The $15.7 billion IMF loan for Hungary is part of a program designed to ease financial market stress in the East European country, buffeted by global financial turmoil.

Hungary’s 17-month Stand-By Arrangement is part of a $25 billion financing package to which the European Union has committed €6.5 billion ($8.4 billion) and the World Bank $1.3 billion.

The IMF approval makes $6.3 billion available immediately and the remainder in five installments subject to quarterly reviews. The Stand-By Arrangement entails exceptional access to IMF resources, amounting to 1,015 percent of Hungary’s IMF quota, and was approved under the Fund’s fast-track Emergency Financing Mechanism.

Specifically, the IMF-supported economic program is based on two key objectives: to implement a substantial fiscal adjustment to ensure that the government’s debt-financing needs will decline; and to maintain adequate liquidity and strong levels of capital in the banking system. Ultimately, the program should help restore stability in the financial sector and create the conditions for an economic recovery.

“The economic program rightly focuses on the fiscal and the banking sectors, which were the two key areas of vulnerability at the outset of the difficulties,” said Anne-Marie Gulde, the IMF’s mission chief for Hungary, who was involved in discussions on the financing package.

“In the fiscal sector, a necessary reduction in the size of the public sector through lower expenditures will ease the country’s short-term financing pressures and bring down the high levels of debt,” she said.

“In the short term, the rollover of debt will become easier and debt will become more sustainable in the medium term. The fiscal measures are also in line with the country’s goal to slowly reduce the large size of its public sector and to provide more room for private activities to grow,” she added.

Given the structure of the Hungarian budget, among other areas, adjustment will need to include revisions of wages and pensions. Under the authorities’ program, expenditure restraint will be achieved in part through reductions in the overall government wage and pension bill. Nominal wage adjustments will be postponed and pension bonuses suspended.

While this path is painful, the authorities have chosen it because failure to achieve credible budget goals could have led to a government financing crisis with more severe consequences for the entire economy. In designing the measures, low-income pensioners were excluded from benefit reductions. Furthermore, Hungary’s comparatively good social benefits will also help to buffer the social effects of these measures.

Hungary, a country of around 10 million people, became a member of the European Union in 2004. It made a successful transition from a centrally planned to a market economy, but the government deficit and the size of the public sector are still relatively large compared to other countries at similar income levels.

The second pillar of the program is decisive measures in the banking sector. They include a preemptive recapitalization of eligible banks and a strengthening of the supervisory and crisis management abilities of the Hungarian supervisory agency. These steps will ensure that banks’ capital remains high and that the supervisory authorities are well prepared to recognize risks and take necessary early measures should vulnerabilities occur.

Hungary was among the first emerging market countries to suffer from the fallout of the current global financial crisis. As financial difficulties in advanced economies led to a decline in global liquidity and an increase in risk aversion, investors increasingly started differentiating among emerging markets.

Hungary’s high external debt levels—which amounted to 97 percent of GDP at end-2007—and significant balance sheet mismatches negatively affected investor appetite for Hungarian assets. Even though macroeconomic and financial policies had been strengthened since 2006, with substantial fiscal consolidation and tax administration improvements, Hungary was hit hard by the global deleveraging. Financial markets in Hungary have come under significant stress in recent weeks, reflecting the rise in perceptions of counterparty risk.

The IMF estimates that growth in Hungary is expected to contract to -1 percent in 2009 from around 1¾ percent in 2008. Already weak private consumption and investment will be negatively affected by both a sharp reduction in new bank lending and the depreciation of the exchange rate. Inflation, which peaked at 9 percent in early 2007, is projected to continue a downward trend and reach 4 percent at end-2009.

In a difficult global environment and with low domestic demand, the economy is projected to recover only gradually owing to the fact that the slowdown is simultaneously occurring in Hungary’s main trading partners and because of the global deleveraging process that will leave less foreign capital available to quickly return to Hungary. Growth is not expected to resume until 2010 or converge toward its estimated potential of 3 percent until after 2011.

The $16.4 billion loan for Ukraine, approved by the IMF’s Executive Board on November 5, will help the government strengthen confidence and restore economic stability after the country became the latest victim of the financial crisis sweeping the global economy.

Until the financial crisis hit the world economy in mid-2008, Ukraine was riding on the coattails of a global economy that had an insatiable demand for steel—a commodity that constitutes 40 percent of the country’s exports, earning $17 billion a year in revenues. The government passed on the gains from high economic and steel exports growth to the population through generous incomes policies.

Together with rising capital inflows, this fueled an unprecedented consumption boom—and a rising current account deficit. By 2008, the economy had overheated, with inflation running at 25-30 percent, wages rising by 30-40 percent, and the import bill growing by 50–60 percent.

From boom to bust

When the financial crisis hit the world in the summer of 2008, Ukraine was among the many emerging markets to suffer from the fallout. Access to international capital markets was curtailed sharply, currency markets sold off the hryvnia, and the credit rating agencies downgraded the country’s debt.

Ukraine’s government acted proactively by putting together a comprehensive package of policies and requesting IMF support in mid-October. Later that month, a tentative agreement on a program was reached through use of the IMF’s emergency lending procedures. And on November 5, the IMF’s Executive Board gave the agreement its stamp of approval.

“The authorities’ program, supported by a two-year Stand-By Arrangement with the IMF, aims to restore financial and macroeconomic stability,” Deputy Managing Director Murilo Portugal said in a press release. “The commitment of leaders of the main political parties to the core elements of the program increases the prospects for successful program implementation. All these elements give confidence that the program will succeed in stabilizing economic and financial conditions.”

Ukraine’s program is underpinned by policies aimed at restoring economic and financial stability. The package includes a flexible exchange rate, measures to recapitalize the banking system, and prudent fiscal and incomes policies that take into account the need for additional social spending to address the impact of the recession on the population.

The government is hoping to achieve three key goals.

• Help the economy adjust to the new economic reality. Allowing the exchange rate to float will act as a shock absorber, and will help the economy recover some of its lost competitiveness. The government is also planning to achieve a balanced budget in 2009, although this goal will be reviewed in light of economic developments. To achieve this, the authorities intend to phase in increases in energy tariffs. They also plan to pursue a balanced incomes policy that protects the population while slowing the rapid increase in prices: the minimum wage and other social transfers will be adjusted in line with projected inflation.

• Restore confidence and financial stability. Recapitalizing viable banks will help shield the economy from a potential credit crunch. Dealing promptly with banks in difficulty will help the rest of the financial sector recover more quickly, and will allow solvent banks to resume lending to households and companies.

Ceyla Pazarbasioglu, the IMF’s mission chief for Ukraine, told reporters on November 5 that the IMF believes the Ukrainian economy could be back at its estimated potential growth rate of 5-6 percent by 2011 while inflation will come down to single-digit levels, assuming that the global economy starts recovering in the second half of 2009.

“The road ahead is difficult,” Pazarbasioglu told reporters. “But Ukraine has enormous potential and should be able to reach it with consistent implementation of adequate policies.”

Asked about the worst-case scenario for Ukraine, Pazarbasioglu said that the country’s recovery could be impeded if global conditions continue to deteriorate and if there is further deleveraging in global financial markets. But she pointed out that the authorities’ program is based on conservative assumptions and that contingency plans have been specified. 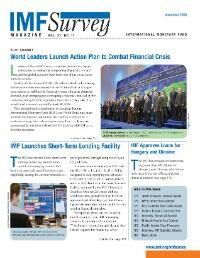