There is mounting concern that rapid growth in India is leaving poorer states behind and may increase the proportion of the population living in poverty. What are the implications for India if the rising tide of growth fails to lift all states? A new IMF Working Paper takes a closer look at state-level data and examines which policies have been successful in spurring rapid growth and what poorer states can learn from their neighbors.

Rising income inequality in India is potentially a serious matter. It could lead to social, political, and economic difficulties and erode support for economic reforms and the further opening of the Indian economy. These concerns are deepened when population growth projections are considered. Between 2006 and 2051, about 60 percent of the projected 620 million increase in the Indian population is expected to occur in three of its poorest states (Bihar, Madhya Pradesh, and Uttar Pradesh).

The pace of growth in real per capita incomes in India’s fastest-growing states—just over 3 percent a year—has been more than twice as fast as that in the slower-growing poor states.

To better gauge the nature and extent of the problem, a new IMF Working Paper explores how growth has varied across India’s 27 largest states over the past three decades. It finds evidence of a widening income gap between rich and poor states (see chart). The ratio of average per capita income in India’s richest state, Punjab, to that in its poorest state, Bihar, rose to 4.5 percent in 2004, from 3.4 percent in 1970. The pace of growth in real per capita income in India’s fastest-growing states—just over 3 percent a year—has been more than twice as fast as that in the slower-growing poor states.

There are also stark differences across states in how growth has translated into poverty reduction and job creation. On average, richer states have been about 50 percent more effective in reducing poverty, for each percentage point of growth, than poorer states. The pace of job creation in middle- and high-income states has far outstripped that in poorer states. India’s poorest and most populous states account for about 40 percent of the population but capture only one-fourth of jobs in the organized sector.

One might also expect that capital and jobs—attracted by a pool of low-paid or unemployed workers—would tend to move to poorer states. This has not occurred, however. About 55 percent of outstanding bank loans in India in FY2004/05 were to borrowers in the five richest states, whereas borrowers in the five poorest states accounted for a mere 15 percent. Moreover, over half of the foreign direct investment inflows into India in recent years have gone to five largely prosperous states.

Another possible mechanism tending to reduce disparities in incomes across states would be labor migration from poorer to richer states. In fact, labor in India does migrate to the richer states, but labor mobility across state borders is very low by international standards and does little to assist the convergence process. Only 6 percent of migra-tion in rural areas and 20 percent of migration in urban areas in recent years has occurred across state borders.

Closer examination of economic performance at the state level, however, uncovers interesting exceptions to these trends. Some of the fast-growing states rank among the least successful in reducing poverty and generating jobs, whereas some slower-growing states have had immense success in improving living standards. Take, for example, one of India’s richest and fastest-growing states, Maharashtra (which includes the financial capital of India, Mumbai). It was less successful in translating its growth into jobs and poverty reduction over the past three decades than Rajasthan, which grew much more slowly than the national average (see table).

This all suggests that differences in policies across states could have important ramifications for economic performance. Indeed, other studies have found that states that have sought to liberalize factor markets and promote good institutions have fared better than others. For example, research by Timothy Besley and Robin Burgess in 2000 found that states that amended labor laws in favor of workers experienced lower growth in output, employment, investment, and productivity in the formal manufacturing sector and increases in urban poverty. Using district-level data, Abhijit Banerjee and Lakshmi Iyer in 2005 found that areas in which proprietary land rights were historically given to landlords had significantly lower agricultural investment and productivity after independence than areas in which these rights were given to cultivators.

An empirical analysis of the drivers of real income growth across states between FY1973/74 and FY2002/03 finds that the economic policies adopted by states influence their subsequent growth performance. In common with much of the literature on the subject, the Working Paper found evidence that poor states grew faster than rich states once controls that proxy for differences in the policies and economic structure across states were held constant.

The rate at which the gap in incomes between poor and rich states closes—about 1–2 percent a year—is very slow, however. This implies that it can take anywhere between 44 and 62 years to close half the gap between any state’s initial level of per capita income and its long-run steady-state level. This is disheartening in that it suggests that a large part of the differences in state income levels reflects differences in their long-run income potential.

But the news is not all bad. The types of economic policies states adopt can have long-run growth effects. Greater invest-ment—proxied by the stock of real private credit per capita—can lead to faster economic growth over a number of years.

The size of government also matters: states with leaner and smaller governments have generally grown faster than relatively high-spending ones. States with a greater initial dependence on agriculture and/or industry also grew more slowly than states in which services played a larger role. Interestingly, the analysis does not find robust evidence of the effects of labor regulations and education on growth, owing to shortcomings in the measurement of these policy variables.

What does all this mean? While growth has so far resulted in widening disparities in average per capita incomes across India’s states, the findings indicate that states can take actions to correct this and that the future need not repeat the past. By adopting better economic policies, states can improve their relative growth performance. They can enhance their long-run economic position by raising investment, improving infrastructure, and pursuing sound fiscal policies. There is also a need, particularly in the poorly performing states, to diversify the economic production base away from agriculture and industry or to adopt policies that make these sectors more productive.

This article is based on IMF Working Paper No. 06/103, “Mind the Gap: Is Economic Growth in India Leaving Some States Behind?” by Catriona Purfield. Copies are available for $15.00 each from IMF Publication Services. Please see page 192 for ordering details. The full text is also available on the IMF’s website (www.imf.org).

The rich got richer 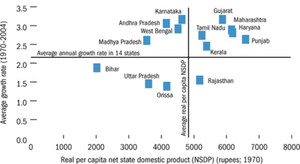