Some have argued that there is a global savings glut, but this is misleading, Rajan said, because the true problem is that in many parts of the world there is too little investment. He saw the current global economic situation as originating in a series of financial crises—in Japan, in emerging markets, and in the information technology (IT) sector—that were triggered by excessive investment. Investment has subsequently fallen off sharply, recovering only tentatively since 2002.

Policy responses have differed considerably across countries. In industrial countries—especially the United States and other Anglo-Saxon countries—low interest rates and expansionary budgets have led to consumption- or credit-fueled growth. Government savings are down, particularly in the United States and Japan, and household savings have fallen in countries experiencing housing booms. By contrast, emerging markets drew lessons from their crises and tightened policies so that they now have fiscal surpluses and have brought inflation down. With corporations cautious about investing and governments similarly prudent about expenditure, growth has become export led, and many emerging markets have been running current account surpluses for the first time. The financing of consumption in rich countries was thus provided by emerging markets.

But this temporary (and effective) response to the crises now needs to be reversed. The world needs two transitions to accomplish this reversal: a transition from consumption to investment, and a reduction of current account imbalances through a shift in demand from deficit countries to surplus countries. Low-income countries, emerging markets (with the notable exception of China), and oil producers need to invest more—high-quality investment that would be promoted by product, labor, and financial market reforms. Strong external demand has allowed a number of these countries to generate growth through exports without the reforms that can create the right incentives to invest, while that demand, originating mainly in a few industrial countries, has been fueled by an increasingly unsustainable fiscal stimulus and inflated housing prices.

Rajan termed oil prices—which hit a new high in late August of $65 a barrel (average petroleum spot price) and are now at more than $62 (see chart)—a “clear and present danger” Oil prices have risen by over $20 a barrel since end-2004, and a substantial further increase cannot be ruled out. The rise in oil prices in the past two years has thus far had little effect on growth, partly because it has stemmed more than have earlier oil shocks from strong demand. Lately though, supply shortages and concerns about potential shortfalls have been fueling price increases, which have been weakening confidence and, in economies that are close to capacity, may create stronger inflationary pressures. Rajan stressed that countries need to pass the higher oil cost on to consumers and refrain from subsidies that disguise the real cost. Conservation measures need to be considered. And the oil market should become more transparent so that investors in all links of the supply chain can make informed decisions.

Against the background of these concerns, Rajan reviewed the WEO projections for the various regions.

U.S. growth slowing. Despite the devastating loss of human life and property, Hurricane Katrina is projected to affect U.S. growth in 2005 by only about 0.1 percent. Until recently, solid growth and booming house prices have allowed consumers to “boldly spend like no one has spent before,” quipped Rajan. But now rising inflation is cutting into the spending power of wages, and increasing interest rates are slowing the growth of house prices, so consumer spending is expected to decelerate. The WEO projects 3.5 percent U.S. growth for 2005 and 3.3 percent in 2006, slightly below 4.2 percent in 2004.

Euro area continues to disappoint. Weak domestic demand has prompted the WEO to lower its projected growth for the euro area to 1.2 percent for 2005 (down from 2.0 percent in 2004 and a drop of 0.4 percentage points from the April projections) and to 1.8 percent for 2006. “Europe’s citizens do not seem convinced the bitter medicine of structural reforms will cure the stasis that afflicts much of the continent,” Rajan remarked. “Economists can only prescribe, but it takes politicians to persuade. It is a failure of politics that people have not come to see that the more they want to retain the European way of life, the more the way they work will have to change.”

Japan looking up. Japan’s economy is regaining momentum. Stronger private consumption and business investment mean Japan is becoming less reliant on exports for growth. The first half of 2005 saw very strong growth, and the WEO now estimates 2005 growth at 2 percent (up from April estimates of 0.8 percent).

Mixed picture for rest of world. China continues to enjoy rapid economic expansion. Growth for 2005 is projected at 9 percent, moderating somewhat to 8.2 percent in 2006. While China has to increase consumption, it also needs to improve the quality of investment. India has been growing robustly, Rajan noted, “basking in the glow” of domestic business confidence and increased international interest in its services, including IT. But further reforms and fiscal consolidation are needed if India is to maintain or accelerate the current strong growth. The government needs to build consensus to take the steps that it knows are needed. “As Shakespeare wrote, ‘There is a tide which taken at the flood leads on to fortune,’” Rajan quoted, “and India cannot afford to miss the tide again.” Growth in other emerging Asian economies has moderated because of higher oil prices and the bursting of the information technology sector bubble, but is expected to pick up again in the second half of 2005 if the IT sector rebounds as expected and if oil prices do not take too much of a toll.

One region for which higher oil prices mean stronger prospects is the Middle East. Rising production and prices, and the associated improvements in external accounts and fiscal positions, have combined to fuel growth. But the healthy growth in Africa is forecast to moderate to 4.8 percent in 2005, a cut of 0.4 percentage point from the WEO’s April projections, partly because of a sharp slowdown in Nigeria as oil production reaches capacity. Exports of non-oil commodities, whose prices have held strong, have helped oil-importing countries weather the higher price of oil.

Increased demand and, more recently, supply contraints are driving oil prices to their highest point since the early 1980s. 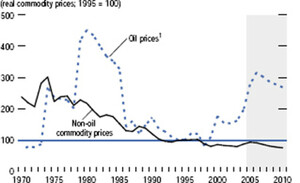