When launched four decades ago to appeal to a select group of wealthy private individuals, the hedge fund industry went relatively unnoticed by both financial regulatory authorities and the general public. Much has since changed, however. Over $1 trillion in assets are now managed by more than 8,000 hedge funds, which share a fee structure whereby fund managers retain a portion—typically, 20 percent—of profits earned. Many funds today reach ordinary retail investors, with the minimum investment having fallen from an average $1 million to $25,000 and to as low as $2,500 for a few funds.

To increase public understanding of hedge funds, the American Enterprise Institute for Public Policy Research (AEI) is sponsoring a series of conferences. The first one, on the role these funds play in capital markets, was held June 26 and featured a panel of practitioners and academics discussing associated policy issues including prospects for regulating hedge funds and the industry’s future direction. Adam Lerrick (AEI and Carnegie Mellon University) moderated the discussion. 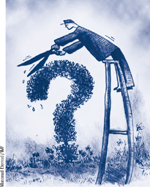 How did hedge funds come into being? The first hedge fund was set up in 1949 as a way to use (then) innovative investment strategies to seek to minimize risk while enhancing returns. But as John Makin (Caxton Associates) explained, the industry really took off in the 1980s as an alternative to the equity-focused, benchmark-evaluated mutual and pension fund industries. The largest hedge funds emerged around major traders in volatile markets for commodities, currencies, and fixed-income instruments.

But since 2000, the role of many new hedge funds has changed radically, Makin said, with increasing numbers of investors viewing them as “a kind of octane additive” to their pension and mutual fund portfolios. Today’s numerous hedge funds follow a wide range of investment strategies, with some indistinguishable from mutual funds—although hedge funds are less stringently regulated.

As with other investment activities, Makin pointed out, a moral hazard problem exists both across the industry and within hedge funds themselves. He warned that a scenario where a number of hedge funds simultaneously pursue a “shoot-for-the-moon” investment strategy could heighten systemic risk, as occurred with the collapse of major hedge fund Long-Term Capital Management (LTCM) in 1998.

Arguing that LTCM should have been allowed to fail, Makin said the “only way” to protect unsophisticated investors is to “show them what happens if they don’t do their homework.” He cautioned against central banks and other authorities stepping in to accommodate liquidity needs in these situations because it could encourage some funds to again follow overly aggressive investment strategies.

In contrast, Chester Spatt (U.S. Securities and Exchange Commission) warned that regulation is needed for “issues involving the stability of the market” and to protect less sophisticated investors, particularly since the recent “retailization” of these funds means that newer investors often do not fully understand the risks involved. Some policymakers are also concerned, he added, because investment advisers may have incentives to substantially add to the risk their hedge funds bear if those risks are not fully understood or detected in the marketplace. Systemic risk—the possibility of correlated defaults across the economy—is another reason why hedge funds have been receiving increased attention from policymakers, Spatt said, also drawing on the example of LTCM’s collapse.

Tanya Beder (Citigroup Alternative Investments) agreed that there are critical questions about how best to regulate such an industry, especially since she expects it to undergo some “massive changes” over the next few years to meet new demands. Beder took a more benign view of hedge funds, however, arguing that their activities can actually make for more stable markets, as hedge fund arbitrage trading has been known to help “smooth out” volatility during periods of high market turbulence.