Policymakers trying to attract foreign direct investment (FDI) to their countries often have exaggerated expectations of what their efforts can accomplish. A recent IMF Working Paper confirms that factors outside the reach of policymakers are at least as important as policies. But policies do matter, and the paper discusses what influences FDI and what does not. It also argues that above a certain level of foreign investment, some policies lose significance while others become more important. By estimating “potential FDI” and contrasting this with actual levels of FDI, the paper tries to give authorities a more realistic expectation of what the right policies can achieve.

The benefits of FDI for a host country have long been recognized: knowledge and technology transfer, productivity spillovers, enhanced competition, and improved access for exports abroad, notably in the source country. But FDI can have negative aspects, too. Large foreign companies often try to coax concessions from host country governments, and sometimes abuse their dominant market position or use transfer pricing to minimize their tax obligations. On balance, however, the consensus is that the benefits of foreign investment tend to outweigh its costs, especially in transition economies that have extensive restructuring and modernization needs and limited domestic capital and other resources.

The decidedly mixed experience of the European transition economies provides an interesting case study (see chart, this page). Some Central European countries, like Hungary and the Czech Republic, have been very successful in attracting foreign investment, accumulating a stock of FDI per capita of $4,000-$4,500 by the end of 2003. Others, notably the countries of Southeastern Europe (Albania, Bosnia and Herzegovina, Croatia, the former Yugoslav Republic of Macedonia (FYR of Macedonia), Serbia and Montenegro, Bulgaria, and Romania) have been much less successful, with some barely reaching the level of $500 of FDI per capita. And the gap between Central and Southeastern European countries is persistent and significant whether FDI is measured in absolute dollar terms or in per capita terms.

What explains FDI patterns in Southeastern European countries—a region largely absent from the existing literature—and how can policies help? To examine this, the study assembled a database with bilateral FDI stocks and flows between 15 host countries (all of Central, Eastern, and Southeastern Europe plus the Baltics) and 24 source countries (the EU-15—the European Union’s pre-expansion members—plus Croatia, Cyprus, the Czech Republic, Hungary, Poland, Russia, Slovenia, Switzerland, and the United States). Advanced economies of Central and Eastern Europe that received FDI in the 1990s and more recently have been sources of foreign investment appear in both groups.

The force of gravity

All previous empirical studies have found that gravity factors (size of the host country market and proximity to the source country) are the most important determinants of FDI. This study uses population—either alone or in conjunction with GDP per capita— as a proxy for market size, the distance between source and host capitals as a measure of geographic proximity, and a dummy capturing cultural or historical ties between source and host country as a proxy for “cultural proximity.” Its findings confirm that gravity factors explain about 60 percent of FDI flows between countries—a sobering finding for policymakers eager to make their countries more attractive to foreign investors. Factors that they cannot influence, such as country size, location, and history, explain over half of the variation in foreign investment.

Do policies matter, then?

But there are steps that policymakers can take to improve their countries’ chances of attracting FDI. The study finds that high unit labor costs, high corporate tax burdens, and, to a lesser extent, high import tariffs discourage foreign investment, whereas liberal foreign exchange and trade regimes and public sector infrastructure reforms, including deregulation to improve competitiveness, stimulate it. In contrast, tax holidays and domestic corruption do not seem to have a statistically significant impact. The results concerning institutional variables, however, should be interpreted with caution, because the indicators used as proxies are not always accurate.

Taken together, these results provide a basis for evaluating the policies aimed at attracting foreign investors and highlight the limits of what these policies can achieve. Take, for example, the emphasis placed by international financial institutions and policymakers in Southeastern Europe and elsewhere on liberalizing the trade and foreign exchange regime and controlling labor costs. The findings suggest that these policies are indeed likely to have a direct impact on FDI. On the other hand, efforts to improve governance and combat corruption— their broader economic benefits notwithstanding—may not have a major direct impact on FDI. Of course, they could still stimulate foreign investment, indeed all investment, indirectly through their positive effects on the economy.

Identifying the policies that are most effective in attracting foreign investment in a large sample of countries is only half the story. The effect that policies have on FDI is dependent upon individual country circumstances. Using a quantitative technique that tests for “threshold effects,” the study finds that policies have different effects once FDI increases beyond a level of around 12 percent of GDP (excluding privatization receipts), roughly that in Poland in 2003 (see chart, this page). When FDI is below that level, gravity variables and labor costs are the predominant determinants of foreign investment. As FDI rises above that level, however, the importance of these factors declines, and the host country’s level of income and broader institutional factors increase in importance.

What the right policies can accomplish

Even if policymakers know exactly which levers to pull to attract FDI, there is a limit to the discretion they have. Tax or tariff rates cannot be driven to zero, even if this were beneficial. In the real world, policymakers often look over each other’s shoulders and use the policies of their most successful neighbors and competitors as a benchmark.

To estimate the impact that policies can have on FDI, the study distinguishes between exogenous variables—the gravity factors—and endogenous variables that are under the policymakers’ control. It defines a “potential” level of FDI for each country using the actual values of exogenous variables (size, location, and cultural links to source countries) and the best values of the policy variables across the entire sample of countries. In other words, it identifies the highest value of the foreign exchange and trade liberalization and infrastructure reform indices, and the lowest unit labor cost, tariff level, and corporate tax burden across the countries in Central and Southeastern Europe in 2003. The gap between actual FDI and this “potential” measures how much each country stands to gain from getting its policies right.

The comparison between “potential” and actual nonprivatization FDI at the end of 2003 shows that Bosnia and Herzegovina, Albania, the FYR of Macedonia, Croatia, and Serbia and Montenegro have the most to gain from getting their policies right. That margin is smaller for Romania and Bulgaria, which have already attracted considerable FDI.

This concept of “potential” FDI should, of course, be seen as a benchmark, not a ceiling. Using the best values of the policy variables across the sample does not mean that “better” values are not possible. But this approach can give policymakers an idea of the amount of FDI that could realistically be expected if each country emulated its most successful neighbors. To continue attracting sizable FDI inflows, countries that are closer to their “potential” should strive to go beyond the policy norms prevailing in the region.

This article is based on the work of Balázs Horváth, Elina Ribakova, and Yi Wu, who, with Dimitri Demekas, authored IMF Working Paper No. 05/110, Foreign Direct Investment in Southeastern Europe: How (and How Much) Can Policies Help? Copies are available for $15.00 from IMF Publication Services. See page 248 for ordering details. The full text is also available on the IMF website (www.imf.org).

Southeastern European countries have attracted less FDI than their Central European neighbors in per capita terms.

As FDI increases above a certain threshold, the impact of policies changes. 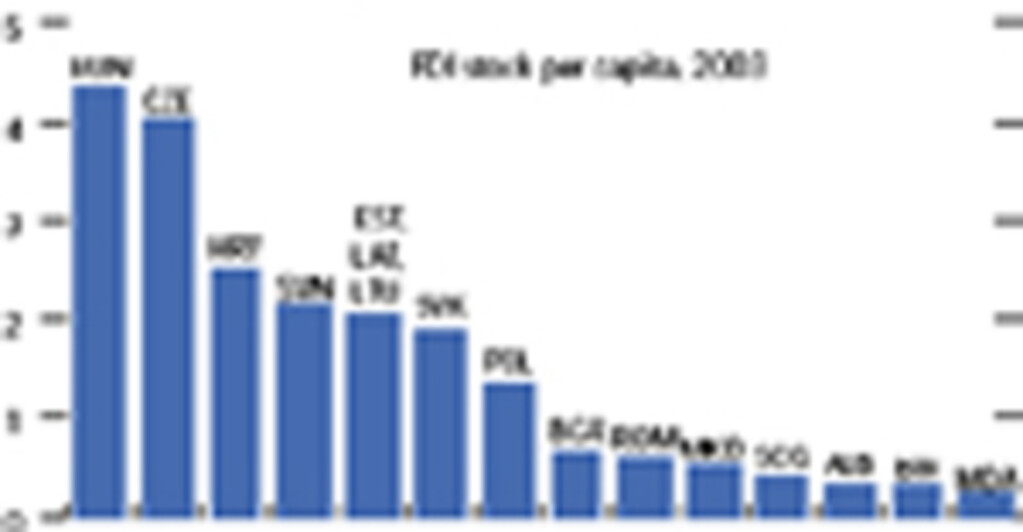 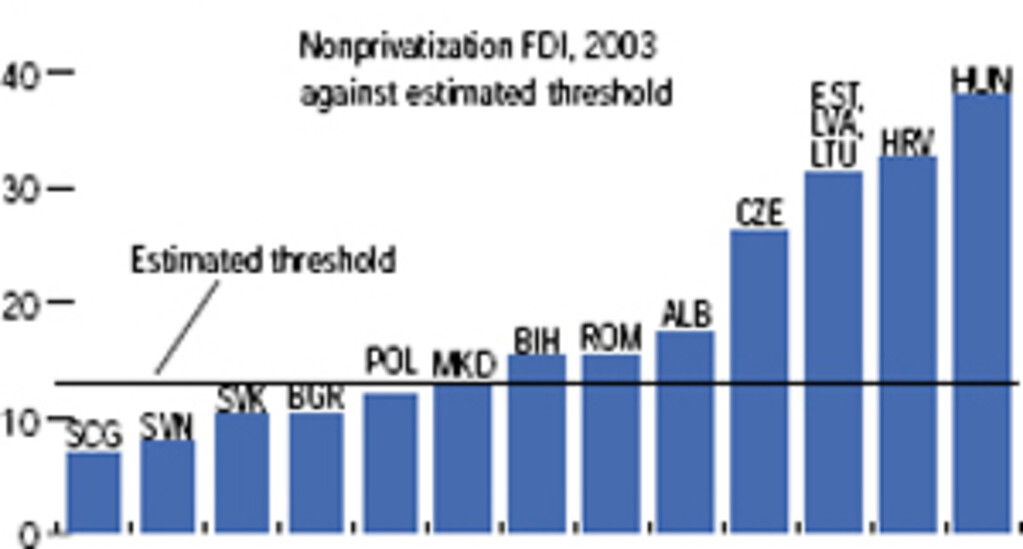