Situated at the heart of the European continent, Austria benefits from access to diverse markets, both mature and emerging. Historically, Austria’s strong economic ties to Germany have provided a relatively stable growth path and a buffer against external shocks. Signs are emerging, however, that the Austrian economy is gradually becoming less dependent on Germany than before, while its links with the faster-growing economies of the Central and Eastern European countries are strengthening.

Austria’s economic outlook is increasingly affected by its changing international economic and financial relationships. In particular, its growing economic and financial links with Central and Eastern Europe have helped diversify the economy and, recently, cushion it from relatively less favorable developments in Western Europe and Germany in particular. Indeed, among the European Union (EU)-15 countries, Austria is likely to have benefited most from Central and Eastern Europe’s transition to market economies and the subsequent entry into the EU of 10 new member states.

Austria’s early focus on building economic and financial relationships with Central and Eastern Europe, including through the banking, industry, and transport sectors, is now bearing fruit; it has increased its exposure to a relatively fast-growing area in Europe, while reducing its dependence on traditional trade partners. This diversification of the economy is likely to bolster both future economic growth and stability.

For decades, developments in the Austrian economy have been closely associated with economic conditions in Germany, particularly on the trade side. Austria had much to gain from its close proximity to a large, prosperous economy. Over the past 20 years, Austria’s exports to Germany more than tripled in constant U.S. dollar terms, accounting for just under 13 percent of Austria’s GDP in 2004—roughly double the rate in the early 1980s. Today, Germany remains Austria’s largest trading partner by far, responsible for about 31 percent of Austria’s total exports.

German and Austrian business cycles also appear to be less synchronized than they once were. Estimates of the degree of comovement among key Austrian macro-economic aggregates and the German economy suggests some decline in correlation of growth rates between the two economies. For example, the correlation between Austrian and German real GDP growth, calculated over a 10-year rolling window, has fallen in recent years, albeit moderately.

More revealing is the pronounced downward shift, since the late 1990s (see chart, next page), in the 10-year rolling correlation between the growth rates of Austria’s real GDP and Germany’s domestic demand. This development reflects the divergence in recent years between the growth rates of the Austrian economy, which averaged 1.6 percent between 2002 and 2004, and German domestic demand, which contracted in each of those three years.

Austria’s economic performance is increasingly influenced by its growing economic and financial links with Central and Eastern Europe, which have provided it with important new markets. Austrian foreign direct investment (FDI) in the region has also played an important role in the integration process, having risen significantly over the past decade and reaching close to €16 billion on a cumulative basis. On an annual basis, Austrian FDI in Central and Eastern Europe has risen to about 2 percent of Austrian GDP.

The role of Austrian FDI has been particularly crucial in the financial sector. Austrian banks’ market share in Central and Eastern Europe, based on total assets, has reached approximately 20 percent, and in several countries this share is appreciably larger. Furthermore, in 2004, the three largest Austrian banks derived more than 40 percent of their pretax earnings from operations in the region.

Austria’s stronger ties to Central and Eastern Europe appear to have coincided with reduced dependency on German economic conditions. On the trade side, Germany’s market share of Austrian exports fell from nearly 40 percent in 1992 to about 32 percent in 2004. Conversely, Central and Eastern Europe saw its market share of Austrian exports roughly double to about 15 percent (see chart, right). Moreover, while comovement indicators between Austria and Germany have weakened, the correlation of macroeconomic aggregates between Austria and key Eastern European economies (particularly Hungary, Austria’s largest trading partner among the Central and European countries) appears to show a steady increase in business cycle synchronization in recent years.

Austria’s success in sustaining positive growth rates, especially at a time when German domestic demand is contracting, is testament to the resiliency and flexibility of the Austrian economy and its ability to reorient itself to areas where potential growth rates are higher. Austrian companies have been looking not only to Central and Eastern Europe but more recently to Southeastern Europe to diversify their trade and investment opportunities.

That said, it is too early to say whether this process is temporary or reflects a more permanent structural shift. Once the transition economies have matured and become less of a magnet for new investment and export markets, Austria’s trade intensity may well shift back in the direction of Germany and other Western European economies.

This article is based on IMF Country Report No. 05/249, Austria: Selected Issues. Copies are available for $15.00 each from IMF Publication Services. Please see page 248 for ordering details. The full text is also available on the IMF’s website (www.imf.org).

Central and Eastern European markets are rising in importance

While Germany’s share of Austria’s exports has dropped by nearly 8 percentage points, Central and Eastern Europe’s share has nearly doubled. 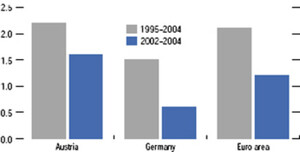 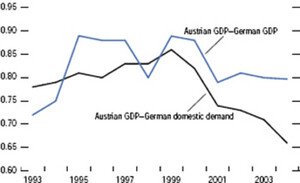