The U.S. economy has proved resilient in the face of sharply higher energy costs, with its expansion and low interest rates providing a substantial boost to the world economy at a time of significant global slack. As the IMF’s Executive Board recently noted, this strong short-term growth outlook leaves the United States well positioned to begin to address some longer-term concerns, including a historically low national saving rate and the severe underfunding of its Medicare and Social Security systems.

As recent indicators suggest, the U.S. economic expansion remains on track. While the economy slowed somewhat in recent quarters, growth continues to be above potential and seems set to speed up in the second half of the year. Household spending has been robust, fueled by rising asset prices, low interest rates, income growth, and steady improvements in employment. Growth remains broad-based, with a rebound in investment supported by low interest rates and strong corporate profits. There are also few signs of overheating in the labor market, despite an unemployment rate of only 5 percent. Inflation, too, remains contained, although in recent months higher energy prices have pushed headline consumer price inflation to 2½ percent.

The global economy is likely to continue to benefit from the U.S. momentum. Net U.S. imports are estimated to have increased growth in the rest of the world by about ¼ percentage point a year since 2001. Favorable financial conditions in the United States have also helped to compress risk premiums on interest rates, lower interest rate spreads, and support activity across a wide range of emerging markets.

The expansion has, however, been marked by a relatively unusual—and likely unsustainable—set of domestic and external imbalances that is characterized by:

As a result, the U.S. economy is in the unusual situation of having foreign savings and domestic corporate profits financing a still-large government deficit and strong household consumption (see chart, previous page). The U.S. economy is, nevertheless, well positioned to sustain its strong performance in the next few years, underpinned by productivity growth, which—despite having eased somewhat as the recovery matured—remains above longer-term trends. Barring shocks, growth is projected to be around 3½ percent in 2005 and 2006. This is slightly above potential and should allow for some rebalancing of domestic financial flows. The current account deficit, however, is projected to remain around 6 percent of GDP, as growing foreign debt and higher interest rates increasingly weigh on the income balance.

On the policy side, the focus appropriately remains on the removal of stimulus. The U.S. Federal Reserve, which cut the federal funds rate aggressively over the downturn, reversed course as deflation risks receded. Since mid-2004, it has raised the rate by a cumulative 2¼ percentage points, and markets expect further cuts in the coming months. For its part, the U.S. Administration has made headway toward its commitment to reducing the budget deficit to below 2 percent of GDP by FY 2009 through rigorous spending restraint, and to making earlier tax cuts permanent. Moreover, an advisory panel to the President is working on proposals to streamline the tax system and strengthen incentives to boost private saving and investment.

The U.S. housing market has boomed in recent years, with real estate prices in many regions rising considerably faster than personal incomes and rents. In 2005, increasing signs of speculative activity—including more widespread purchases of second homes and an uptick in the use of interest-only and other mortgage loans that defer principal repayment—have concerned regulators and fueled a debate over whether the market may be subject to a correction in the near future.

To better understand the attendant macroeconomic risks, IMF staff examined how changes in the structure of mortgage finance have affected the real estate market. It found that the shift from bank to market financing—particularly the development of a national securitized market for mortgages—has helped spread risk and may also help reduce the amplitude of boom-bust financing cycles, thus lowering the volatility of both real housing activity and prices.

Until the late 1980s, mortgage lending was mainly a local business, and most mortgages were kept on the balance sheets of local depositories for the lifetime of the loan. The availability of mortgage credit depended on local financial conditions, including the level of deposits and capital at local banks and thrifts. In the aftermath of the savings and loan crisis in the 1980s, however, the U.S. mortgage market saw a dramatic shift from local to nationwide funding through mortgage securitization. This loosened the link between depository balance sheets and mortgage flows, and reduced the extent of stop-and-go credit cycles.

Changes in the structure of the mortgage market have also coincided with sharply lower volatility in real housing activity (see chart, next page). Residential investment spending exhibited pronounced cycles prior to the 1990s, with growth rates of 40 percent or more during booms, and similar declines during busts. This cyclical volatility has now diminished markedly, with housing activity growing at a more stable pace.

Housing prices have shown a similar convergence toward more steady growth over this period, helped by securitization and less volatile lending conditions. With mortgage lending subject to (partly regional) boom-bust financing cycles prior to the 1980s, even qualified home buyers were at times unable to obtain financing. This may have induced households to pay a premium over a home’s fundamental value during periods of easy financing, and vice versa. The shift in mortgage financing to a securitized national market has reduced the volatility of credit flows, lowering the incentive for such “over” and “under” payments, and possibly reducing swings in house prices.

Empirical evidence supports this hypothesis. The link between fundamentals—such as interest rates, income, and unemployment—and housing prices appears to have become tighter after the mid-1980s, with fundamentals accounting for a larger share of variation in housing prices in the 1990-2004 period than before. The unexplained portion of house price developments (“pricing errors”) has also tended to shrink in the later period, suggesting the reduction was associated with mortgage market securitization rather than with an overall reduction in macroeconomic volatility.

This analysis should help allay some concerns about the housing market’s future. It suggests, first, that current pricing errors are not particularly large and that rising incomes, employment, and low interest rates still explain much of the recent gains in housing prices. Second, recent above-trend growth in the real estate market follows a decade of negative surprises, especially on the coasts. This may mean that recent housing price gains partly reflect a catch-up of prices relative to fundamentals.

This article is based on IMF Country Report No. 05/258, United States: Selected Issues. Copies of the report are $15.00 each and can be ordered from IMF Publication Services. See page 248 for ordering information. The full text is also available on the IMF’s website (www.imf.org).

The IMF’s Executive Board saw broadly favorable prospects for the U.S. economy (see table, previous page). It noted some risks, citing continued higher oil prices (which could begin weighing more heavily on domestic demand) and an external current account deficit that is expected to remain large well into the medium term.

With slightly above-potential growth slowly eroding economic slack and real interest rates at low levels, Directors viewed the Federal Reserve’s gradual removal of monetary stimulus as effective and appropriately balanced for achieving the twin goals of price stability and growth. They also noted that a key element of the strategy’s success has been the combination of interest rate hikes with clear messages that more forceful action would be required if price pressures continued to intensify.

The Board welcomed the U.S. authorities’ commitment to fiscal deficit reduction, as well as recent revenue-driven improvements in the budget outlook. Most Directors argued that the present cyclical strength of the U.S. economy provided an auspicious opportunity to accelerate the pace of fiscal consolidation, which is still critically important given the impending pressures on entitlement programs as the baby boom generation begins to retire. In this context, most Directors felt that options for revenue enhancements—including a broadening of the income tax base or consumption or energy taxes—should be explored, given the strict spending discipline already assumed in U.S. budget projections.

Fiscal consolidation would also help raise national saving— a U.S. Administration priority and a concern for the IMF Executive Board, which viewed the extremely low saving rate as a key policy challenge going forward. Directors stressed that complementary efforts were needed in other parts of the world to implement the agreed strategy for reducing global imbalances.

Directors continued to emphasize the need to address the severe underfunding of major entitlement programs, which would be key to restoring long-term fiscal sustainability. With public health care spending projected to triple as a ratio to GDP in coming decades, they called for further steps to improve the efficiency of the overall health care system. Directors also welcomed the Administration’s recent support for specific measures to place the Social Security system on a sustainable basis, stressing that delays in legislative action would only increase the adjustments that will eventually be needed.

Before the 1990s, real residential investment in the United States was highly volatile, with booms and busts of 30 percent and more. 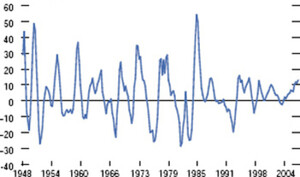