The ongoing dialogue between the IMF and its member countries on their economic policies—surveillance, in IMF-speak—is a key component in the institution’s mission to help ensure a stable international monetary system and prevent crises. Given the importance of surveillance, the IMF carries out biennial reviews to maintain and improve its effectiveness. While every review makes recommendations for strengthening surveillance, the IMF’s Executive Board did something new at its most recent review in July 2004. It identified six priorities and charged staff with monitoring progress toward achieving these priorities. Lynn Aylward of the IMF’s Policy Development and Review Department reports on the staff’s role and the progress to date.

The ultimate objectives of the IMF’s economic policy oversight and advice remain the same today as they did in 1977, when the Executive Board adopted the decision that put surveillance into effect. But the framework for surveillance is far from static. Lessons learned from major international developments and events have helped shape its evolution. In its most recent review, the Executive Board recommended that the IMF prioritize and monitor the goal it sets for surveillance. In particular, the review established six priority objectives: a sharpened focus in the IMF’s regular (“Article IV”) consultations with member countries; a deeper treatment of exchange rate issues; enhanced financial sector surveillance; greater attention to regional and global spillovers in country surveillance; progress in improving debt sustainability and reducing balance sheet vulnerabilities; and further work on surveillance in low-income countries.

In the wake of the 2004 review, IMF staff is being more selective in the level of coverage given to trade matters and to macroeconomica My relevant areas outside traditional areas of Fund expertise.

As a first step in pursuing these priorities, the IMF updated and fine-tuned the guidance that it provides to its own staff. These guidelines reflect what the institution has learned about how to carry out a well-focused and highquality assessment. What do these guidelines emphasize in the six priority areas?

Sharpening the focus. To sharpen the focus of Article IV consultations, surveillance must take into account the breadth of potentially important topics but, ultimately, maintain a selective approach, focusing on the issues that are key for each country. The IMF’s surveillance is no longer limited to fiscal, monetary, and exchange rate policies—as was the case in its earliest days. It now also covers financial sector issues and those structural and institutional issues that affect macroeconomic conditions and prospects. Capital account developments, debt sustainability analyses, assessments of vulnerability to balance of payments or currency crises, and attention to governance and social issues are also part of the package.

While this evolution—some would say expansion—keeps surveillance effective, it is also a challenge for staff to maintain a fine balance between focus and breadth. To respond to the Board’s call for greater focus, the staff has, among other steps, taken a more discriminating approach in its coverage of issues outside the Fund’s traditional areas of expertise. The staff has always selected topics for Article IV consultations based on their macroeconomic relevance and, within the selected topics, concentrated on the issues at the top of the Fund’s “hierarchy of concerns”— that is, topics related to external sustainability, vulnerability to balance of payments or currency crises, sustainable growth with price stability, and the systemic or regional impact of policies in large economies.

In the wake of the 2004 review, IMF staff is being more selective in the level of coverage given to trade matters and to macroeconomically relevant areas outside traditional areas of Fund expertise. In particular, there is greater attention to whether such topics are well integrated with the overall policy discussions and make good use of existing sources of information from the Fund (such as Reports on the Observance of Standards and Codes (ROSCs)) as well as from the World Bank and other reputable sources. Staff are also working toward a strategic identification of topics for each country’s consultation, through “pre-brief meetings” within the IMF and through an exchange of views with country authorities on priority topics at an early stage.

More attention to exchange rates. In response to the Executive Board’s call for a more candid and pointed treatment of exchange rate issues, the staff are making more systematic use of a broad range of indicators and other analytical tools to assess external competitiveness. They are ensuring that each Article IV consultation report includes an accurate description of the exchange rate regime, a candid appraisal of its appropriateness and consistency with underlying policies, and a forthright assessment of the exchange rate level. Renewed efforts to strengthen the treatment of exchange rate issues include presenting the policy dialogue between staff and the authorities in a comprehensive and balanced manner, particularly when views differ between them. 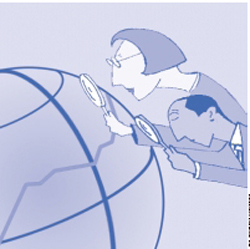 Stronger oversight of the financial sector. The Asian financial crisis, which demonstrated that even countries with relatively sound macroeconomic policies can get into serious trouble when their financial systems have weaknesses, prompted the IMF to make the financial sector a core area of its surveillance. While substantial progress has been made in this area, including through the joint IMF-World Bank Financial Sector Assessment Program (FSAP), the July 2004 review found that the coverage of financial sector issues was not yet on a par with coverage in the IMF’s traditional core areas of fiscal, exchange rate, and monetary policies.

To remedy this, the Board called for enhanced financial sector surveillance. Staff now aim to make use of all available options to bring the necessary expertise to bear on the analysis of the financial sector. This means drawing on FSAP reports, reassessments, and updates, and involving experts from the IMF’s Monetary and Financial Systems and International Capital Markets Departments in Article IV consultations or in “stand-alone” missions that would concentrate on financial sector issues and contribute to an Article IV team’s overall assessment of the economy. The main conclusions of financial sector analyses are also being better integrated into the overall vulnerability assessment and policy discussion for a given member country.

Where relevant, staff reports outline the potential impact of important economic developments in major regional or trade partners and offer more detailed analyses of the issues raised under multilateral surveillance and relevant to particular countries. IMF economists who carry out surveillance in large countries are paying closer attention to the regional or systemic impact—the spillover effects— of these countries’ economic developments and policies. And, related to the call for integrating country, regional, and multilateral surveillance, the staff are deepening country analysis by making more use of the IMF’s cross-country comparative studies.

With regard to the conduct of surveillance in low-income member countries, staff are using Article IV consultations to strengthen analysis of external shocks that could derail growth trends in poor countries and they are analyzing alternative macroeconomic frameworks under different aid flow assumptions.

All of these measures are providing a good basis for assessing whether the IMF is indeed improving the effectiveness of its surveillance, a quintessential question for the next review of country surveillance.