For the past 25 years, Mauritius has enjoyed strong economic growth and, since its independence from the United Kingdom in 1968, seen peaceful political transitions. But with global competition heating up and several preferential trade arrangements lost or sharply curtailed, this open and resilient economy must step up its competitiveness and adapt its products to continue its economic success.

Mauritius has bucked the trend of stagnation and poverty and succeeded in building a vibrant economy and raising the living standards of its population of 1.2 million. Between 1980 and 2004, economic growth averaged 5½ percent a year and annual per capita income rose from $1,610 to $4,340 at constant 2000 prices and exchange rates (see chart, below). To achieve this success, the country over the past quarter century has diversified its economy from a reliance on a single export commodity—sugar—to other activities such as tourism, export processing (mainly textiles), financial services, and, more recently, information and communications technology.

Despite this diversification, however, sugar remains an important part of the economy, generating about 15 percent of merchandise exports. Through its participation in the African-Caribbean-Pacific group, Mauritius has been exporting sugar to the European Union (EU) under the so-called Sugar Protocol that permits about 510,000 tons of its raw cane sugar to enter the EU duty free and at a preferential domestic price that is about three times the international free market price. Indeed, Mauritius is the protocol’s main beneficiary, claiming some 40 percent of the total quota.

Following a recent successful challenge of the EU’s sugar regime before the World Trade Organization, however, the EU agreed to cut the domestic price for sugar by 39 percent over two years. The EU will partly compensate European growers for lost income, but this decision is expected to cost Mauritius as much as $125 million a year in lost export revenue.

While this downward revision in the EU sugar price was perhaps not a surprise, the depth of the cut and the short transition period do present formidable challenges. It is hoped that the sharply lower EU prices will reinvigorate the Mauritian sugar industry’s determination to cut production costs by improving productivity. The sugar industry is likely to continue to shed excess labor through a voluntary retirement scheme, consolidate milling operations, and diversify its markets into such areas as electricity cogeneration, and rum and ethanol production.

Textiles have been the driving force behind Mauritius’s successful industrialization over the past 25 years, dominating its export-processing zone and benefiting from unrestricted access to the European, and to a lesser degree the U.S., markets. Beginning this year, however, the lifting of quotas has given low-cost producers, such as China and India, unrestricted access to the major textile markets in Europe and the United States.

The impact on Mauritius was felt well in advance of January 2005. For the third year running, the contribution of its export-processing zone to output growth has shrunk by about 5-6 percent, reducing its share in the economy from 12 percent in 2000 to less than 9 percent in 2004. More important, employment in the zone has dropped from a peak of 90,700 in December 2000 to 68,000 in December 2004, with some 20 of the largest, mainly foreign-owned, companies closing shop and relocating to China and Taiwan Province of China (see chart, next page).

The recent U.S. and European response to the surge in Chinese textile exports may provide a temporary reprieve for Mauritius’s textile exports. Over the longer run, however, its textile industry will survive only if it succeeds in specializing in high-value niche markets with a dedicated commitment to high-quality products.

But not all is gloom and doom. Tourism and financial services continue to provide sound opportunities for growth.

While most of Mauritius’s “economic miracle” in the 1980s and 1990s focused on the export-processing zone, the performance of the country’s tourism sector was equally remarkable. Indeed, between 1985 and 2000, the Mauritius tourism sector, measured by the number of tourist arrivals, grew by some 340 percent, far outpacing other regional competitors such as Maldives and Seychelles. Another sign of the resilience of Mauritius’s tourism industry is its performance following the September 11, 2001, attacks in the United States. Unlike most international tourist destinations, including those in the Indian Ocean, Mauritius’s tourism sector continued to grow in 2001 and 2002.

The Mauritius tourism sector is largely homegrown, with a number of luxury hotel chains based in Mauritius and majority-owned by Mauritian entrepreneurs. The authorities have contributed to the sector’s success by promoting Mauritius as an exclusive destination, including by discouraging mass tourism through a restrictive air access policy. They have justified this strategy by the need to avoid overcrowding and to preserve the island’s delicate ethnic and social balance. The result has been the development of a tourism product that is directed primarily at the highspending European market. Tourism is expected to continue to grow in the foreseeable future and will remain an important sector that provides valuable employment opportunities.

Mauritius has one of the oldest and most sophisticated financial systems in Africa. It is not only well capitalized, it is also highly profitable. While the banking system was already well developed at independence, the robust economic performance over the past quarter century strongly contributed to its further expansion. At the same time, the solidity and sophistication of the financial sector facilitated the economy’s diversification. Thus, a virtuous cycle was established in which the financial system and the productive sector strengthened in parallel, with each sector supporting the other and contributing to its modernization and profitability. A strong regulatory framework and monetary policy aimed at maintaining macroeconomic stability also helped bolster the soundness of the financial system. There is every reason to believe that the financial sector will continue to play this critical role in the Mauritius economy.

All of that said, however, if the economy’s transition to new and more dynamic activities is to be facilitated, policymakers will need to redouble their efforts to maintain macroeconomic stability and an open economy, while preserving social cohesion. Markets will also need increased flexibility, particularly in the highly regulated labor market.

Mauritius has succeeded in establishing strong institutions, including a well-functioning government administration, an independent judiciary, an efficient and well-regulated financial sector, a vibrant private sector, and, most important, a stable and democratic political system. Given the strength of these institutions, and the social consensus of its people, Mauritius is well positioned to take on the economic challenges it faces.

While real per capita income has stagnated in sub-Saharan Africa, it has nearly tripled in Mauritius.

Mauritius’s export-processing zone has suffered steep declines in jobs and value added since 2000. 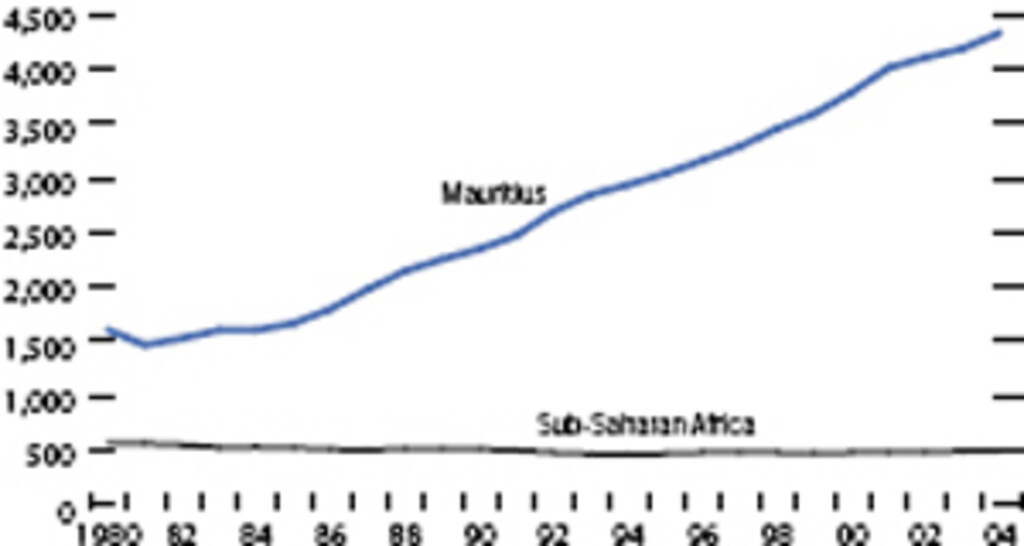 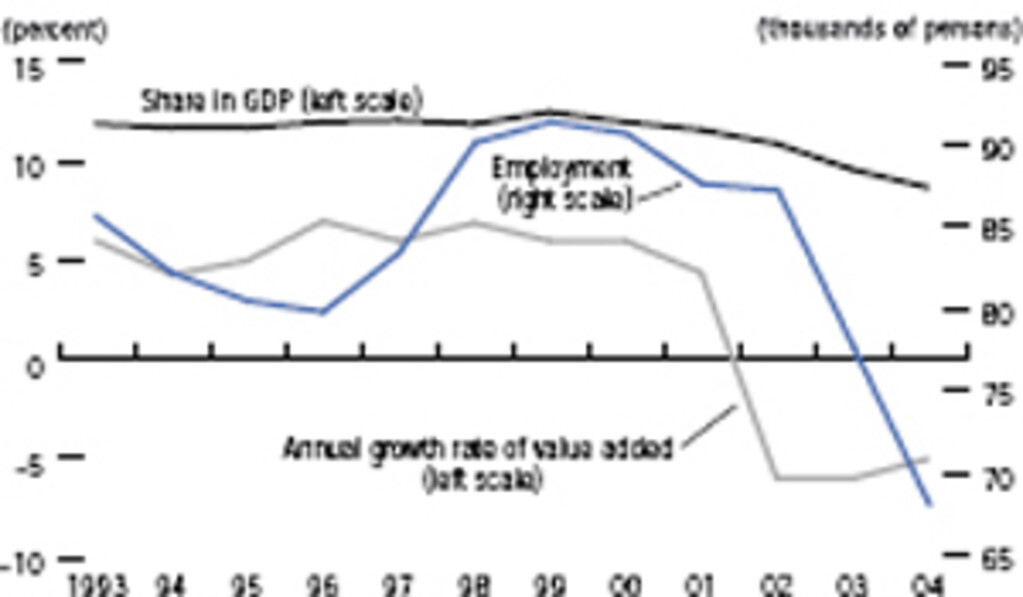