Over the next few years, Georgia—situated between the Black Sea on the West and the Caspian Sea on the East—will become an increasingly important transit point for oil and natural gas exports from its neighbor, Azerbaijan, and from the Caspian Sea to Europe. Two new pipelines under construction hold out the promise of increased revenues from transit fees. How lucrative will this be for Georgia? In an IMF Working Paper, Andreas Billmeier, Jonathan Dunn, and Bert van Selm of the IMF’s Middle East and Central Asia, and Asia and Pacific Departments make some revenue projections and suggest policies that could help to ensure effective use of these revenues.

Azerbaijan today uses two pipelines to export its oil (see map). One takes the western route to the Georgian Black Sea coast; the other a northern route through Russia. The western route is the preferred one for taking Azeri crude oil to world markets; it is much shorter, and, as a result, has much lower transport costs. In addition, Azeri light crude using the Russian pipeline system loses value when mixed with Siberian crude.

The western and northern routes, however, share a common disadvantage. They use Black Sea ports that require passing through crowded Turkish straits to reach the Mediterranean. With oil exports from the former Soviet Union rising rapidly, the traffic bottleneck at the Bosporus and the Dardanelles has become increasingly problematic, prompting governments and oil companies with a stake in Azeri oil exports to build a new pipeline that will take Azerbaijan’s crude oil directly to the Mediterranean. In 1995, two groups of companies—led by British Petroleum—began work on this pipeline, along with another that will carry gas from Azerbaijan to Turkey through Georgia.

The Baku-Tbilisi-Ceyhan (BTC) pipeline, expected to become operational by the end of 2005, traverses 1,760 kilometers (1,094 miles) of often remote and challenging terrain and has the capacity to transport up to 1 million barrels of crude oil a day from a cluster of sources in the Caspian Sea, known as the Azeri-Chirag-Gunashli field.

The South Caucasus Pipeline (SCP), expected to be operational by the end of 2007, will carry gas from the Shah Deniz field (one of the biggest gas fields in the world, off the Azerbaijan shore) to Azerbaijan, Georgia, Turkey, and other countries. It will follow the same route as the BTC crude oil pipeline through Azerbaijan and Georgia to Turkey, where it will then link to the Turkish gas distribution system. Spanning 690 kilometers (429 miles), it can carry up to 7 billion cubic meters of gas a year upon completion, with the possibility of doubling this capacity in the future.

How much can Georgia expect to earn from the transport of oil and gas via the BTC and the SCP? According to the authors’ assumptions (see box, next page), Georgia is projected to receive around 1 percent of GDP in additional revenues (around $80 million) a year over the medium term. While these transit revenues would make a significant contribution to the government’s resource envelope, given the country’s relatively low tax revenue (the 2004 tax-to-GDP ratio amounts to 18 percent), they are not of the same order of magnitude as revenues in oil- or gas-extracting countries. In Azerbaijan, for example, oil-sector receipts account for almost half of all government revenues, or 10 percent of GDP in 2004.

What can Georgia do to boost revenues from the new pipelines? The authors suggest that the authorities develop plans to monetize in-kind fees from transiting gas—a strategy that would require a significant improvement in payments discipline among consumers in the domestic gas sector—or consider taking cash as a transit fee.

Consumers fall into three different categories: large power generation/industrial clients, distributors, and others, mainly small-scale businesses. Payments discipline is highest in the latter segment. Enforcing discipline from large-scale direct clients has proven much more difficult, because these entities are perceived as “systemically important,” complicating the enforcement of a tough disconnection policy. Payments discipline for gas sold to distributors has also been poor, because they have been unable or unwilling to enforce discipline on their own customers. For example, the cash collection rate of Tbilgazi, the municipality-owned distributor in the capital, amounted to less than 30 percent in 2002 and approximately 23 percent in 2003, although it did improve to 33 percent in 2004.

Monetization of gas received as a transit fee is further complicated by Georgia’s commitment to buy additional gas from the SCP consortium at a discounted price for at least the first five years of the project. The authorities need to develop as soon as possible a strategy to deal with these issues—especially to find paying customers at home or abroad and to build or rent storage capacity. If it becomes difficult to monetize the additional gas (which Georgia is now committed to purchase) at low transaction and storage costs, the authorities may want to consider taking cash as a transit fee.

Recent experience in the Commonwealth of Independent States (CIS) reinforces the conclusion that monetizing in-kind gas transit fees may be difficult. Ukraine receives about 25 billion cubic meters a year in in-kind transit fees from Russia to compensate for the use of its gas pipeline network to transport Russian gas to Western and Central Europe, as well as to southern parts of Russia and to other CIS countries. If sold at $50 for every thousand cubic meters, these fees would be worth more than $1 billion a year. But the company that receives and handles the fees, Naftogaz, is the largest delinquent taxpayer in Ukraine, runs arrears on its payments for imported gas from Russia and Turkmenistan, and has not been able to make the investments needed to properly maintain trans-Ukrainian pipelines in recent years. Owing to a combination of underpricing and poor collection rates, Naftogaz’s cash flow is inadequate. Clearly, Georgia will need to do a much better job in monetizing in-kind transit fees— or take the cash option instead.

Given Georgia’s limited expected revenues from transit fees, the country will not need to concern itself with the fiscal issues associated with price volatility, exhaustibility of the revenue stream, or exchange rate volatility that oil-producing or other resource-rich countries typically face. It will therefore not be necessary to create a natural resource fund for stabilization or saving purposes. Instead, the authors conclude, additional resources should be incorporated in the general government budget and used to defray the cost of urgent social and infrastructural needs.

To ensure that transit fee revenues are appropriately used, the authors urge the Georgian government and British Petroleum to practice maximum transparency in reporting and utilizing transit fees. To this end, they say, the Extractive Industries Transparency Initiative could provide Georgia with a useful framework for adequate reporting. But the template that has been developed by the initiative—prepared with oil-and gas-producing countries in mind—should be extended to allow for easy reporting by oil- and gas-transiting countries. The Georgian authorities have taken a promising first step in this regard by agreeing in principle to become a pilot country under the initiative.

This article is based on IMF Working Paper No. 04/209, In the Pipeline: Georgia’s Oil and Gas Transit Revenues, by Andreas Billmeier, Jonathan Dunn, and Bert van Selm. Copies are available for $15.00 each from IMF Publication Services. Please see page 232 for ordering details. The full text is also available on the IMF’s website (www.imf.org). 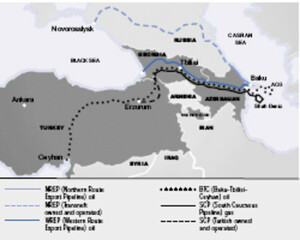