With weak growth and high unemployment continuing in much of Europe, and with key reforms stalled for lack of popular support—including the much maligned directive that would have liberalized the European Union’s (EU’s) trade in services—obstacles to a revitalization of economic activity seem formidable. In a recent IMF Working Paper, Professor Tito Boeri from Bocconi University researched the political economy of labor and product market reform in Europe over the past two decades. His findings suggest that there may be effective strategies for those increasingly discouraged policymakers who still wish to fight eurosclerosis but don’t know how to.

With weak growth and high unemployment continuing in much of Europe, and with key reforms stalled for lack of popular support—including the much maligned directive that would have liberalized the European Union’s (EU’s) trade in services—obstacles to a revitalization of economic activity seem formidable. In a recent IMF Working Paper, Professor Tito Boeri from Bocconi University researched the political economy of labor and product market reform in Europe over the past two decades. His findings suggest that there may be effective strategies for those increasingly discouraged policymakers who still wish to fight eurosclerosis but don’t know how to.

Institutional “rigidities”—a catch-all phrase used by economists for barriers that keep markets from operating effectively—exist because, somewhere, there is a group benefiting from them and lobbying for their preservation, Boeri writes. What’s more, such barriers rarely operate in isolation; a regulation in one area calls for regulations in another area. That’s why countries with the most restrictive labor markets usually also have the most tightly regulated product markets.

Removing these rigidities is proving extremely difficult, not because governments do not wish to carry out reforms, but because reforms usually encounter strong political opposition. So what can politicians do? While there are similarities between labor and product markets, there are also important differences, which matter tremendously when it comes to adopting a viable reform strategy.

Boeri and his colleagues looked at labor market reforms in EU countries during 1985-2003 and categorized them as either marginal or radical. This analysis revealed that— contrary to popular belief—many reforms have, in fact, been carried out over the past two decades. Boeri and his colleagues counted 414 reforms, amounting to more than 1.6 reforms per year per country. But almost all of the reforms—roughly 95 percent—were marginal. What’s more, they were almost evenly split between initiatives aimed at increasing labor market participation (for instance, tightening unemployment benefits and making employment contracts more flexible) and policies that moved in the opposite direction.

But as the research also showed, even marginal reforms can help build strong momentum for change. “Reforms ‘at the margin’ or the unbundling of reforms offers a very powerful way to enforce politically difficult reforms,” Boeri writes, adding that “the trick is to devise them in such a way as to gradually extend the new rules to everybody.” But since there are potential distortions associated with maintaining a two-tier system for a long time, the speed of the transition from the old to the new rules is crucial to success.

Reforms ‘at the margin’ or the unbundling of reforms offers a very powerful way to enforce politically difficult reforms . . . the trick is to devise them in such a way as to gradually extend the new rules to everybody.

As part of such a strategy, it also pays to target changes to groups that are more likely to have a positive attitude to reform. Younger workers are, for instance, more likely to approve of reforms that expand the scope of private pensions than individuals closer to retirement age are. A similar approach can be used to introduce more flexible working arrangements for new hires or school leavers, with the new rules eventually extending to everybody as old workers leave the workforce.

The findings also show that politically difficult reforms (such as tightening benefits, reducing employment protection, and cutting pensions) often are carried out during recessions, whereas many reforms do the popular job of increasing generosity and protection during times of strong growth. According to Boeri, “a tentative explanation for this rather surprising result is that there may be a stronger perception of emergency when macroeconomic conditions are less favorable—recessions are often times of ‘extraordinary politics’.” When growth is strong, lobbies often try to appropriate a larger share of the economic pie.

For his study of product market reforms, Boeri looked at the same group of EU countries and once again classified reforms according to their scope (were they radical or marginal?) and orientation (did they increase or decrease competition?). His findings revealed some important qualitative differences between reforms in the two sectors.

In contrast to labor market reforms, product market reforms almost invariably sought to increase competition. Reforms were also much less likely to be marginal. According to Boeri, this is because marginal reform, by nature, cannot succeed in product markets. A marginal reform in a specific sector (for instance, electricity) would result in a market with a different set of rules applied to different firms. Incumbent firms would operate under the old set of rules, providing them with protection and rents (for instance, in the form of government subsidies), whereas new entrants would be forced to operate without, creating an inherently uneven playing field and making it easy for old firms to force out new ones.

To complicate matters further, radical reform in product markets is difficult to undertake for at least two reasons. First, the lobbying power of incumbents is strong— monopolists are likely to oppose any attempt to undo their coveted privileges. Second, the public does not typically care strongly about reforming a specific sector, which diminishes voter pressure for the change. According to Boeri, this is because people are much more likely to identify themselves as workers than as consumers. So while they will happily demonstrate against attempts to undo their pension or unemployment compensation privileges, they care much less about achieving lower electricity prices.

Devising a strategy that works

What can politicians do to overcome these obstacles? Boeri suggests that delegating the regulation of product markets to the supranational level may be a viable option. “This strategy is ultimately what lies behind the success of European countries in liberalizing their product markets in the early 1990s,” he writes. EU competition policy—aimed at eliminating anticompetitive agreements, liberalizing monopolistic sectors, controlling mergers between firms, and monitoring state aid—has been very important in liberalizing product markets and in preventing the undoing of earlier reforms. More recently, the introduction of the euro has led to greater price transparency and increased capital flows, which has also encouraged product market reform.

In contrast, a supranational strategy would not work for labor market reform, Boeri says. “In the case of labor market and social policies, the case is instead strong for keeping decentralized, country-level decision making in place. Public insurance schemes, for instance, can be better run at a decentralized level. There is also evidence of diseconomies of scale in social security provisions. The most effective social security systems (those achieving more redistribution relative to the resources allocated to them) in Europe are those of the smallest EU members.

Finally, there are country-specific clusters of institutions, and imposing the same approach on all may end up getting the worst of the various systems. It is much better to rely on competition among systems, forcing reforms that imitate best practices,” he concludes.

So what does all this mean for the ill-fated services directive, which would have liberalized the product markets that make up 50 percent of the EU’s GDP? If it had been adopted, it would have given a strong impetus to freeing up trade in services ranging from plumbing to investment banking. But with the public mood seemingly swinging against a further devolution of power to the EU, national politicians are left fending for themselves—for the moment, at least.

Copies of IMF Working Paper No. 05/97, “Reforming Labor and Product Markets: Some Lessons from Two Decades of Experiments in Europe,” are available for $15.00 each from IMF Publication Services. Please see page 216 for ordering information. The full text is also available on the IMF’s website (www.imf.org). 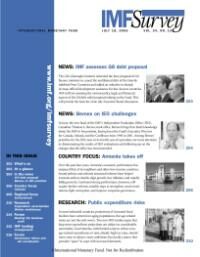