Many countries, particularly in Asia, including some key emerging markets, have accumulated vast international reserves since the late 1990s. While higher reserves bring many advantages for these countries, some observers have raised questions about the costs of reserve holdings. After all, reserves could as well be used to other ends. A new IMF Working Paper examines the cost of reserves for the world’s 100 largest economies and finds tentative indications that for many countries the cost of international reserves has indeed risen substantially in recent years.

Many countries, particularly in Asia, including some key emerging markets, have accumulated vast international reserves since the late 1990s. While higher reserves bring many advantages for these countries, some observers have raised questions about the costs of reserve holdings. After all, reserves could as well be used to other ends. A new IMF Working Paper examines the cost of reserves for the world’s 100 largest economies and finds tentative indications that for many countries the cost of international reserves has indeed risen substantially in recent years.

The world’s stock of international reserves has risen rapidly since the late 1990s. Import cover, a popular relative measure for reserve holdings, for the median of the world’s 100 largest economies has risen from about three months during the first half of the 1990s to about five months in 2003-04 (see broken line in chart). The increase comes mostly from developing countries: for the advanced economies (outside Asia), import cover has been falling steadily over the 1990s and beyond. Among developing countries, however, the increase in reserves was pervasive: 56 of the 79 largest developing economies included in the study increased their import cover from 1990 to 2004.

Most countries have reaped significant benefits from increasing their reserves. In particular, they have been buying “insurance” against domestic and external economic and financial market shocks. By reducing credit risk, higher reserves have contributed to the sovereign rating upgrades many developing countries have seen in recent years. Better ratings, in turn, have contributed to narrower spreads and lower borrowing costs. Thus, higher international reserves have often provided not only the relatively intangible benefits of reducing crisis risk but also the very tangible benefit of a lower public interest rate bill, freeing up fiscal space.

At the same time, however, reserves have costs attached to them. First, there is an opportunity cost: instead of being invested in usually low yielding instruments like treasury bills issued by reserve currency countries, reserves could be used to finance public capital expenditure or to pay down external debt and reduce the associated interest bill. Second, there often is a cost from sterilization of reserve increases: many central banks offset at least part of the increase in liquidity created by reserve accumulation by selling domestic instruments, which usually bear higher interest than the assets in which international reserves are invested. Third, there is often a cost from revaluation: if a country’s domestic currency appreciates against the currencies it holds as reserves, there is a quasifiscal loss—of course, there might also be a gain if the domestic currency depreciates, but reserve growth is more likely to be followed by appreciation. Together, the opportunity cost, the sterilization cost, and the revaluation cost can have a substantial (quasi) fiscal impact, either directly through lower central bank profits or indirectly through forgone alternative uses of public funds.

There is anecdotal evidence that the net cost of many countries’ reserves has been rising in recent years. Clearly, higher reserves have saved many countries money through better ratings and lower interest payments. But at the same time, higher reserves—in tandem with lower world interest rates—have increased opportunity and sterilization costs, and many central banks have suffered losses as their currencies have appreciated against the reserve currencies.

A closer look at the benefits and costs of international reserves for the world’s 100 largest economies tentatively confirms that reserves have become costlier during the past couple of years: rough estimates suggest that while most countries “made money” on their reserves during 1990-2001, most of them “lost money” during 2002-04 (see solid line in chart). Over 1990-98, countries were reaping an estimated median net gain of about 0.5 percent of GDP. In 1999, when the U.S. dollar appreciated significantly against a large number of other currencies, the estimated net gain amounted to a record 1.3 percent of GDP. In 2003-04, however, when the U.S. dollar weakened across the board, the estimated median net gain turned into an estimated net loss of about 0.2-0.4 percent of GDP. These estimates do not include the potentially substantial cost of sterilization, because of the limited availability of data on sterilization operations in most countries.

Clearly, the recent weakness of the U.S. dollar has been the most important driver of the increasing cost of holding reserves. But a number of other factors have been at play as well: on the benefit side, the estimated savings from lower borrowing costs have been rising; on the cost side, rising reserve holdings have driven up opportunity costs. Falling world interest rates worked both ways: they increased costs by lowering financial returns on the reserves, but reduced costs by lowering the cost of not repaying external debt.

Dividing the 100 countries into five regions reflects some of these insights. During the 1990s, the estimated median net benefit from international reserves was generally lowest in the advanced economies and in the Middle East and Central Asia. This reflected in the first case mainly relatively low reserves-to-GDP ratios that limited the potential for financial returns relative to GDP, and in the second case numerous U.S. dollar pegs, which limited revaluation gains when the U.S. dollar was strengthening against many currencies, and high opportunity costs due to relatively low capital stocks. The estimated net benefit was generally highest in the emerging market economies of Europe and Latin America, reflecting relatively high estimated revaluation gains and relatively high estimated savings from lower borrowing costs. Estimated median gains or losses in the Asia-Pacific region and sub-Saharan Africa mostly fell in the middle between the other four regions. In Asia, this reflected many U.S. dollar pegs and generally low external debt and high capital stocks; in Africa, it reflected generally low levels of reserves relative to GDP (until recently) and little external debt at market rates.

The 2004 estimates for some of the countries with the largest reserve accumulations in recent years also reflect differences in the incremental impact of reserves on borrowing costs and the revaluation costs from the weaker U.S. dollar. The estimated net cost tended to be highest in some of the emerging markets that combined large reserves with strong credit ratings and sometimes floating currencies or euro pegs. At the same time, the estimated net cost was lowest (often negative) in some of the higher-risk emerging markets.

There are a number of tricky issues to bear in mind when putting a fiscal price tag on international reserves: ideally, data on individual countries’ reserve asset allocation and sterilization operations would be needed for a more accurate assessment; the relationship between reserves and spreads is likely to change over time; and the social cost of forgone public investment is difficult to pin down both conceptually and empirically. However, sensitivity tests have shown that the results cited here are sufficiently robust against changes in the underlying assumptions for general conclusions to be drawn, although the findings for individual countries may display higher sensitivities.

What does this mean for policies? This will ultimately depend on the individual country circumstances that determine the benefits and costs of holding reserves. Many countries, however, are increasingly considering alternative ways of self-insurance (such as the development of local securities markets) or improvements in reserve management (see, for example, IMF Global Financial Stability Report, September 2004) against the background of rising costs of holding international reserves.

Copies of IMF Working Paper No. 05/81, A Fiscal Price Tag for International Reserves, are available for $15.00 each from IMF Publication Services. Please see page 168 for ordering details. The full text is also available on the IMF’s website (http://www.imf.org). 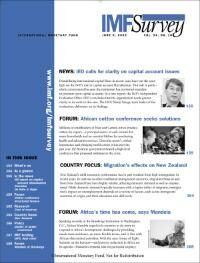