The joint IMF-World Bank Global Monitoring Report 2005: From Consensus to Momentum warns that without bold, tangible action, the Millennium Development Goals (MDGs) will be seriously jeopardized—especially in sub-Saharan Africa, which is off track on all goals. What is at stake, the report underscores, is the opportunity for hundreds of millions of people to escape poverty, disease, and illiteracy, and in so doing boost prospects for long-term global security and peace.

Five years ago, 189 countries signed the Millennium Declaration, an agreement that spelled out a set of targets— the MDGs (see box below)—that, if achieved by 2015, would represent substantial progress in reducing poverty and promoting sustainable development. Clearly, if these goals are to be reached, developing countries, developed countries, and international financial institutions all have to take on added responsibilities and momentum must be sustained. How are these actors delivering on their commitments? The Global Monitoring Report tracks progress with policies and actions needed to meet the MDGs. This year’s report, the second in an annual series, pays special attention to sub-Saharan Africa, which is the region facing the stiffest challenges and the one farthest from achieving the MDGs.

With only a decade remaining, progress toward the MDGs has been slower, and more uneven across regions, than originally envisaged. Risks of falling short are greatest for the human development goals, with the gravest prospects in the area of health. Based on current trends, most countries will not meet the goals to reduce child mortality by two-thirds and maternal mortality by three-fourths. Substantial increases in the supply of teachers, doctors, nurses, and community health workers are needed. Africa, for example, needs to triple its health workforce—adding one million—by 2015.

Prospects are somewhat brighter in education. But in three of the six developing regions the pace of progress has been too slow to attain the goal of universal primary school completion. Although significant progress has been made in reducing gender disparities in education, again half of the regions will not achieve the goal of gender equality in primary and secondary education by the end of 2005. Prospects for achieving gender equality in tertiary education by 2015 are even less encouraging.

At the launching of the report, lead author Zia Qureshi, of the World Bank, underscored that “behind these cold statistics on the MDGs are real people, and lack of progress has tragic and immediate consequences. Every week in the developing world, 200,000 children under five die of preventable diseases—a tragedy on the scale of the recent Asian tsunami that repeats itself every week. In sub-Saharan Africa alone, 2 million people will die of AIDS this year, and 115 million children in developing countries are not in school.”

The good news is that global prospects for achieving the first MDG—halving income poverty between 1990 and 2015—are promising. Due largely to rapid progress in China and India, East Asia has already achieved the income poverty MDG, and South Asia is on target. A particularly striking example is Vietnam, a low-income country that reduced the incidence of poverty from 51 percent in 1990 to 14 percent in 2002. Most other developing regions are also making steady progress and are expected to achieve the goal or come close— though some countries will fall short in every region. In sub-Saharan Africa, where the incidence of poverty actually rose between 1990 and 2001, the prospects are much bleaker. But there is hope: even in many lagging countries, progress is being made and the ground is being laid for better performance. In sub-Saharan Africa, for example, 12 countries are currently experiencing growth spurts above the trend for the region, with average GDP growth over the last decade of 5.5 percent or more.

(3) Eliminate gender disparity in primary and secondary education, preferably by 2005, and in all levels of education by 2015.

(7) Ensure environmental sustainability by integrating the principles of sustainable development into country policies and programs and reversing the losses of environmental resources.

(8) Develop a global partnership for development.

What can be done to generate the required momentum and broaden progress in achieving the MDGs? The report points to the essential role of strong economic growth. Sub-Saharan Africa alone needs to almost double its current growth rate to an average of about 7 percent a year over the next decade. But as Mark Plant, Senior Advisor in the IMF’s Policy Development and Review Department, noted, “There is no blueprint. Each country’s unique circumstances mean that it must prepare its own poverty reduction strategy.” To this end, the report calls on developing countries to take the lead in articulating and implementing strategies that substantially accelerate progress. This means that developing countries must deepen policy and institutional reforms aimed at strengthening macroeconomic management, promoting private sector activity, and strengthening public sector governance. 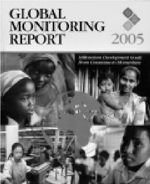 Aid can do only so much

Developed countries must do their part, too. The Global Monitoring Report urges developed countries to bolster their efforts and live up to the commitments they made at Monterrey in 2002. Providing more and better aid is an important part of such efforts. Official development assistance must at least double in the next five years to support the MDGs, particularly in low-income countries and sub-Saharan Africa, with the pace of the increase aligned with recipients’ absorptive capacity. In 2003, official aid flows rose by $10.7 billion, to $69 billion. If commitments made by donors at or since the Monterrey Conference are realized, total official aid could rise to $100 billion by 2010. But a big push on aid is not the sole answer. Plant cautioned that while higher external assistance will be part of any country’s package, the provision of aid, by itself, is not a growth strategy. In fact, evidence suggests that the long-term impact of aid on growth tends to be relatively small.

International development policy needs to move beyond aid to include not only trade policy reform but also other policies that affect private capital flows, knowledge and technology transfer, security, and the environment. The report also recommends ways in which support provided by international financial institutions can be strengthened and sharpened (see box below).

Dismantle barriers to trade. Pursue ambitious reforms in the Doha Round, including major reform of agricultural trade policies, and also increase “aid for trade”; and

Double development aid in the next five years. In addition, improve the quality of aid, with faster progress on aid coordination and harmonization.