Thanks to solid global growth and improved corporate and emerging market fundamentals, the global financial system has become healthier and more resilient, according to the April 2005 Global Financial Stability Report. Improved fundamentals—combined with ample global liquidity, which has encouraged leverage (borrowing to finance higher-yielding investments) and risk taking—have also bolstered asset values. The IMF report, which is published twice a year, notes that risks remain, however, including from potential investor complacency and the possibility of faster-than-expected increases in U.S. interest rates. The report also examines the implications of transferring risk to the household from the financial sector and trends in corporate finance in emerging markets.

In part because of the transparent communication strategies of major central banks, world financial markets have remained orderly as short-term interest rates have been raised in the United States and some other mature markets. Despite these hikes in short-term policy rates, yields on long-term bonds have stayed low and financial markets have experienced little volatility. Low long-term government bond yields, particularly in the United States, have partly been the result of low demand for net credit by the corporate sector, shifts in the preferences of pension funds toward fixed-income investments, and strong official foreign demand for U.S. treasury and agency securities.

Low interest rates have encouraged investors to move out along the risk spectrum in a quest for higher yields, thus buoying asset valuations and compressing credit spreads (see chart below).

Though it is hard to estimate the degree of leverage, there remain strong incentives for investors to borrow at low short-term rates to fund positions in higher-yielding assets. Investors have also been encouraged by improved corporate and emerging market sovereign fundamentals. Corporate balance sheets are generally healthy, and defaults are at cyclical lows. Key emerging market countries continue to improve their resilience by building reserves, implementing sound macroeconomic policies, and undertaking beneficial debt-management operations.

For their part, emerging markets have continued to experience a largely healthy expansion of their investor base, including U.S. and European pension funds and insurance companies. Emerging market sovereigns have used this strong investor appetite well, completing a substantial portion of their external borrowing needs for 2005—and in some cases even for 2006—at low cost (see chart above).

Global investors have also shown a greater appetite for local market instruments, such as domestic government bonds, which has, in turn, allowed emerging market borrowers to reduce currency risks by meeting more of their needs through local currency borrowing. The recent, albeit still very limited, global issuance of local currency emerging market bonds is encouraging. Also welcome is the fact that some countries have been able to issue local fixed-rate bonds in longer maturities than before, and that local currency sovereign emerging bonds are being included in benchmark global bond indices.

The recent period of high liquidity and low volatility may, however, have led to some complacency and reduced investor discrimination—both of which suggest that the balance of risks is likely to be on the downside. Inflationary pressures in the United States could, for example, prompt faster-than-expected hikes in U.S. interest rates, which could, in turn, widen credit spreads and lead investors to reconsider their appetite for risk. Possible adverse developments in U.S. corporate bond markets could also spill over to emerging bond markets.

Other risks stem from the need to reduce global payments imbalances. Global financial flows have been giving policymakers time to implement corrective policies, and the real effective depreciation of the dollar that has occurred since early 2002 should support adjustment of the U.S. external deficit, which would be further facilitated by greater flexibility among key Asian currencies. However, should markets lose patience with the pace of change, asset prices could start to play a more forceful role in bringing about adjustment. One potential trigger could be a market reassessment of the likely pace of accumulation of U.S. dollar reserves by central banks, particularly in Asia.

In its final installment of a series exploring the transfer of financial risk, the report examines the implications for the household sector. While households have always been the ultimate bearers of financial risks, these risks have traditionally been intermediated by governments and private financial and nonfinancial institutions. A key message of the report is that government policies that seek to improve the financial stability of important financial institutions, such as the introduction of risk-based capital or similar prudential standards, should also take into account the consequent transfer of risks to households and their ability to absorb or manage such risks.

In recent years, households have benefited in various ways from a significant growth in net worth relative to income. This has been associated with a shift in the composition of household wealth from relatively stable bank deposits to more volatile and market-sensitive assets, which has exposed various age and income cohorts to greater risks. Moreover, planned reforms of public and private retirement benefits may give households even greater responsibility for their long-term financial affairs. These reforms confer certain benefits, such as the greater portability of pension plans, but also increase the direct exposure of households to investment and market risks, and even to the risk that they may outlive their financial plans and assets.

The report suggests that in these circumstances, new instruments may be needed to facilitate long-term household savings for retirement. It also points out the importance of consistent government policies, including stable tax policies, for encouraging long-term savings. The issuance of long-dated bonds, index-linked bonds, and longevity bonds related to the actual lifespan of a given population could help households deal with the financial implications of uncertain life expectancy and convert long-term savings into a dependable income stream.

In addition, as more households come to rely on defined contribution pensions, there may be need for greater financial education of households to increase their ability to manage risks. Governments have an important role in developing communication strategies to inform households about their retirement challenges and in coordinating with the private sector to provide financial education. It will also be important to improve household sector data so that particularly vulnerable groups can be identified.

Recent data on emerging market corporate finance indicate an increase in bond issuance and a stagnation or decline in bank lending and equity issuance, but, in general, a continued scarcity of market-based sources of funding. An analysis in the new report finds that the culprit is general weaknesses in corporate governance rather than firm-level problems. Important gaps remain, for example, in implementing and enforcing widely accepted principles of corporate governance. A growing number of recent studies demonstrate how weak corporate governance practices, such as inadequate minority shareholder protection and a lack of independent directors or external auditing committees, are magnified by weaknesses in contract enforcement, the rule of law, and judicial systems. Disclosure regulations are also vital in facilitating market discipline.

When emerging market corporates lack adequate and diversified sources of funding, they typically turn to a heavier reliance on foreign currency and short-term debt instruments, which leads to well-known vulnerabilities. Based on firm-level data, the report provides new estimates of how balance sheet mismatches develop and a better basis for understanding corporate sector behavior. The analysis also combines these mismatches with traditional financial ratios and bankruptcy risk indicators to assess the overall fragility of the corporate sector. 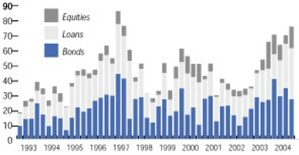 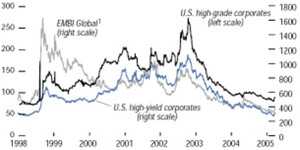