After a tumultuous presidential election that brought the country to the brink of financial crisis, hopes are running high that Ukraine’s new government will usher in a new era of economic reform and prosperity. President Viktor Yushchenko has declared rooting out corruption and putting Ukraine en route toward European Union accession his two policy priorities. At the same time, faced with a surging fiscal deficit and rising inflation, the new government’s immediate challenge is to restore macroeconomic stability. This article sketches the roots of Ukraine’s current policy challenges and the new government’s evolving agenda.

After declaring independence in 1991, Ukraine tumbled into a deep and prolonged depression. The country’s initial conditions were clearly unfavorable, and this was nowhere more evident than in its oversized, energy-intensive industrial sector, which produced goods in little demand and provided a habitat for rent seeking and corruption. Amid initial bursts of hyperinflation, Ukraine saw its output slide by 55 percent from 1991 to 1999.

As a result of several stabilization and reform programs, implemented from late-1994 onward and supported by IMF financing, Ukraine gradually managed to bring inflation under control, but the country remained traumatized by incoherent policy gradualism. Drifting stop-go structural policies, exemplified by on-off credit support for politically well-connected sectors, left Ukraine’s economic and political systems caught in an “under reform” trap. Rampant corruption, high taxes, and burdensome regulations fueled a rapidly expanding shadow economy and rent-seeking activities that, in turn, stymied the buildup of the market-supportive institutions required for high and sustained catch-up growth. The low point was reached when Russia’s financial crisis hit in 1998, and Ukraine was forced to devalue its currency steeply and restructure its external debt.

Confounding expectations, Ukraine boomed during 2000-2004, with annual GDP growth averaging 8½ percent. The boom seems to have been ignited and sustained by four main factors:

But this success has brought new challenges. Combined with inadequate policy reactions, the growth boom gave rise to serious internal and external macroeconomic imbalances. In 2004, in the run-up to the presidential election, the incumbent government embarked on a highly procyclical expansionary fiscal policy in an already overheating economy. Reflecting mainly a massive hike in pensions, the fiscal deficit swelled to 4½ percent of GDP. Moreover, partly owing to the authorities’ maintenance of a significantly undervalued de facto currency peg vis-à-vis the U.S. dollar, the external current account surplus widened to 11 percent of GDP, forcing partly unsterilized intervention in the foreign exchange market by the National Bank of Ukraine. As a result, inflation has picked up, reaching over 13 percent in the year to February 2005—the highest 12-month rise in consumer prices in four years.

Reestablishing fiscal discipline now needs to be the number-one priority to restore macroeconomic stability. The unprecedented sudden hikes in pensions by the previous government are estimated to have pushed Ukraine’s public pension bill from 9 percent to 16 percent of GDP—very high by international standards. If this problem is left unaddressed, the pension system’s future financing needs will crowd out other spending priorities (particularly on education, health care, and infrastructure) and impose a massive additional tax burden on an already overtaxed formal economy.

At the same time, there is only limited room for tightening monetary policy as long as Ukraine continues to operate its de facto exchange rate peg. Looking forward, more favorable risk-return perceptions regarding Ukrainian assets could cause a further pickup in net capital inflows, thus adding to the challenge of sterilizing foreign exchange intervention. The IMF has for some time now recommended that Ukraine allow more exchange rate flexibility.

And then the hard part

While putting Ukraine’s fiscal house in order is a vital first step, the current growth spurt is liable to peter out without far-reaching structural reforms to protect property rights, enforce contracts, and build institutions in support of a well-functioning market economy. By all indications, corruption and rent seeking remain endemic. Ukraine ranks 122 out of 146 countries in the corruption index compiled by Transparency International, and its privatization efforts have been notorious for allegedly brazen insider deals.

Naturally, foreign investors had shunned such a difficult business environment, with foreign direct investment totaling less than $8 billion since independence. The lack of transparency and convoluted ownership structures have also resulted in more specific risks to the Ukrainian economy. In particular in the banking sector, where related-party lending has been a widespread practice, the true state of credit quality and of bank financial conditions remains opaque. The evolving strategy of the new government therefore rightly focuses on increasing transparency and tackling institution building.

The scope of the challenges is huge, but the time is propitious for a watershed in Ukraine’s transition to a market economy. Ukraine’s economy and currency are strong, investor interest is unprecedented, and the international community stands ready to support serious reform efforts.

Under the de facto peg of the exchange rate, external and internal imbalances have added to inflationary pressures. 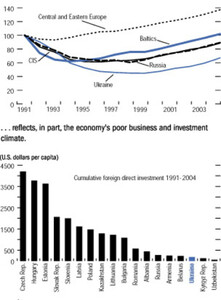 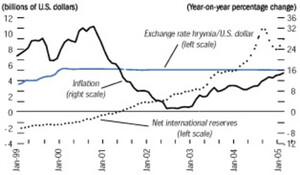 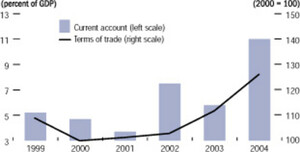